Released in May 2012 by Galcon, Dynamite Jack is a game about a space marine named Jack whom, armed with only bombs and a flashlight,
must escape the Anathema Mines. Gameplay involves use of stealth tactics to stay out of the sight of guards, spiders and other assorted
baddies, and judicious use of explosives. The game also features a fully functional level editor. 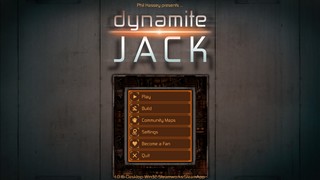 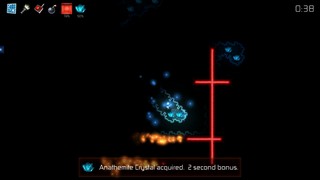 Note: Some levels end with a negative time so there's no total time listed.

If you don't want to download them, those speedruns are available on YouTube but I highly recommend watching them on SDA for a better quality.
Link to the YouTube playlist containing all the levels: http://www.youtube.com/playlist?list=PLbClUYxbgDTtWpiHVTLRTqLQgkrZQMnCe

First of all, the records for each levels can be found online here: http://www.galcon.com/dynamitejack/scores.php?action=listmaps
The game is composed of 28 levels. For some reason 30 levels are shown on the website, "The Breakout" and the second "The Crypt" shoudn't be there since they aren't part of the base levels.

I tried a lot of things and coudn't discover any tricks except that you can enter the field of view of the guards just a bit before being noticed.
Some levels have a negative time because when you pick up a crystal, the timer is subtracted by 2 seconds.

I'm playing with a XBox 360 controller, which is smoother than a keyboard so it allows me to gain a bit of time.

#01 Barrier Cave (-0:29.50)
First level of the game, obviously very easy.
I'm doing something that I will do a lot, I'm dropping bombs while running to get a larger path when I'm coming back and save a bit of time.
The guard can be killed easily and everything is pretty much straightforward.

#03 The Cubicles (0:11.46)
Fastest level of the game.
I'm distracting the guard by blowing up a bomb so I can walk straight.

#04 Walls (0:45.78)
I'm not taking the main path here because it's faster to reach the exit by destroying the walls since they aren't indestructible.
I'm trying to blow up the bombs as fast as I can without dying.

#05 The Generator (0:01.98)
I have to destroy all the red blocks to reach the exit, but I'm also going for the crystals since they reduce the final time.
I'm killing the guard so he doesn't follow me around when I'm destroying everything.
I'm not picking some crystals at the right of the level because they are too far away, it's not worth the time going there.

#06 Power Plant (0:20.40)
Another very fast level.
I was able to distract the guards at the same time as destroying the red blocks so I didn't lose time dealing with them.

#07 Advanced Lab (0:46.56)
This level is the first one with scientists.
They kill you if you enter an illuminated area or if you activate your flashlight close to them.
If you stay in the dark they won't hurt you unless you touch them.
I killed all the enemies on my path to clear the way, collected all the needed keys are rushed the exit.

#08 Triplex (0:42.78)
This one also introduces something new: Lasers.
You die if the beam touches you and they can be destroyed with a bomb.
It wasn't easy to get this time because it's a pain to get rid of the three lasers at the end very fast without getting killed by your own bombs or entering a laser beam.
I'm waiting a bit before entering the second room because there is no way you can go in without stopping and without being seen by the guard.

#09 Crystal Excavation (-0:29.26)
On this level I'm not taking the flashlight because it would make me lose time, so it's pretty dark.
I'm killing the guards while picking up crystals to avoid losing time dealing with them.
All the crystals are worth picking up because they are close to the blue blocks I have to destroy.

#10 The Halls (0:52.08)
This route is the fastest I came up with.
Running in circles at the beginning doesn't have any purpose, I just have to wait a bit before picking up the first card because guards are in the way.

#11 Dual City (1:18.08)
Planning this level was harder because I had to make sure I'm destroying the blocks and avoiding the guards without having to wait.
I have to get the detonator all the way down and then come back to destroy the color blocks and unlock the exit.

#12 The Bunker (0:51.20)
Another level with a new enemy.
Those monsters follow you and kill you if they come too close but they run away when you light them up with the flashlight.
I came up with this route that allows me to destroy all the blocks without stopping a lot and getting caught by the guards.

#13 Star Complex (0:52.93)
This one is huge so it took me a bit of time to plan my route.
There isn't a lot of guards so they aren't really a problem.
All the walls are destructible, which makes me able to take shortcuts by blowing them up.

#14 Containment Unit (1:13.85)
Unlike the previous level, the guards here are a pain since there's a lot of them.
I managed to kill them all while collecting the keys, this way I can destroy the blue blocks and escape easily.

#15 The Core (1:29.10)
There's not much to say here, I don't have the detonator until I get all the keys so there's no room for originality.
I then destroy all the reds blocks while avoiding the guards and reach the exit.

#16 Micro Palace (0:36.10)
This one is pretty quick since I don't lose time picking up the flashlight.
I'm blowing up bombs at the end because they light up the floor a bit so I know where I'm going.

#17 Abandoned Mine (0:04.66)
I also don't have the flashlight here until around half the level.
There's no guards and a few monsters that aren't a big deal since I run faster anyway.
None of the crystals are too far away so I take them all.
Then it's just all about having an optimal route and not screwing up with bombs.

#18 The Crypt (1:21.66)
This level is interesting.
Here is how it's supposed to be done: You have to reach the flashlight that is located very far, then come back to get the detonator and come back again where the flashlight was to escape.
But the flashlight is so far away that I thought it would be awesome to find a way to get the detonator without it, and after a lot of tries I finally succeded.
The problem was that there are two monsters coming for you in a very small corridor so you can't dodge them.
I managed to get only one to come and then dodging him with the help of the corners of the corridors.
Then I dodged the other one, picked up the detonator and killed them.

#19 Laser Lab (1:09.15)
This one was also interesting to plan since there's a lot of guards and some lasers.
Picking up the detonator without getting hit by the laser beam is pretty cool since it's really close.
At some point I'm using the fact that the savepoint is blocking laser beams and the field of view of the guards to avoid dying.
This is something that I will do again in further levels.

#20 Cube Fortress (1:29.86)
Something weird happens here.
Right before opening the orange triangle door, a guard turns around because of the bomb I just blowed up but he turned around in the other direction that I predicted and I end up in front of him.
But he still doesn't see me.
It seems like something that would be usefull to dodge the guards but I tried to do it again and couldn't, so I guess it must be one of those frame-perfect tricks that is really hard to do.
The level in general is pretty much all about running around collecting keys and destroying blue blocks while avoiding guards.

#21 Stealth Gems (-1:43.18)
Another huge level with destructible walls and crystals.
It once again all depends on having an optimal route, blowing up bombs fast and trying to spend the fewest time possible waiting.
There's a lot of crystals and I pick up all of them except a few ones that are really far at the top left, because it would take too much time going there.

#22 Factory 7 (0:51.48)
I'm once again using the savepoint to avoid being noticed by a guard.
The last bomb is used to get the last two guards out of the zone where the exit is located because I would had to spend a lot of time waiting if I kept the guards there.

#23 Branching Fissures (1:40.21)
Here I have to get the three keys before reaching the detonator and the path is very tight so there's a lot of waiting.
Then I blow up a bomb to move the guards out of my way and escape faster.

#24 The Darkness (0:20.61)
Very fast level here, nothing special.
There's no flashlight available but it doesn't really matter since the level is very small.

#25 Crystal Refinery (-0:47.56)
This is also a small level but there's a lot of guards.
I managed to get this route which allows me to pick everything without having to wait too much.

#26 Honeycombs (0:49.55)
The three last levels contain spiders.
They can't be killed and their field of view is rotating clockwise around them but when a bomb blows up anywhere in the level they stop and look towards this direction therefore they can be dodge pretty easily.
The level is pretty simple, there isn't a lot of guards and they are easily avoidable.

#27 Technoplex (1:06.91)
I don't take the flashlight at the beginning because I don't really need it anyway and it saves some frames.
Not much, but every frame is worth saving.
This level is once more quite easy, as always I'm killing the guards to avoid getting caught by them later.

#28 The Decatron (1:10.48)
And here we are, the last level and the one which took me the most time.
It wasn't very hard to plan the route but it was really harder than the other levels to do it without making mistakes because it's a lot longer.
Except that there's not really anything special in this level.