Released by Koei in 2003, Dynasty Warriors 4 continues with the basic plot of the earlier games, but puts the action on a much grander scale. Players are able to choose from multiple characters and fight their way thorugh huge, epic battles against hordes of enemy soldiers as they fight to unite the Three Kingdoms. 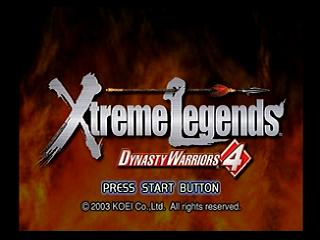 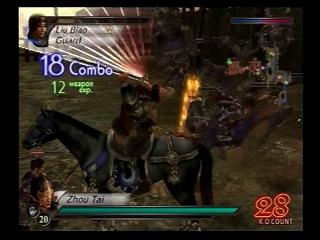 The return of Super Ma Chao Man! And this time, he's pissed. He will get his mighty revenge because everything had to be redone, and he'll do it under even tougher circumstances!

Flamboyant introductions aside, this run was a bit harder to optimize than I would've liked. Add the fact that I chose Expert difficulty instead of Hard and you have many failed attempts.

Stage comments
The Yellow Turban Rebellion: 1'10"10
99% of attempts never made it through this stage, 98.9% of them because of Zhang Jiao. Either I didn't have enough Musou Gauge when I got there, I Musoued too early, completely whiffed with attacks, or I was knocked off the horse. With some crazy-tight execution, it may be possible to cut the minute...

Battle of Hu Lao Gate: 3'13"46
Here I switch to Shadow Harness because of the whole "getting knocked off the horse" factor, which is 104% certain to happen on Expert difficulty from here on out. I hated the fact that I had a complete whiff on Diao Chan, but everything else was going pretty good up to this point, and the rest of the run went really well.

Battle of Bo Wan Po: 0'41"71
Picking this stage avoids Tian Shui's Prodigy, which takes at least 4 minutes to complete. Hooooooooly, I did not believe it was possible to even sniff this kind of time. All of my previous practice attempts were averaging about 1:05, with some 0:59's in there. Cao Cao was cooperative to the point where this time will get obsoleted by an IL, and that's it.

Battle of Chi Bi: 1'05"63
This was the make-or-break stage of the run, and with Cao Cao being cooperative again, I had to continue. I keep believing that cutting the minute may be possible with Shadow Harness, but it requires extremely tight execution and crazy luck.

Campaign for Cheng Du: 1'50"38
This stage went far better than my rejected submission, and that's with Liu Zhang's group not appearing right away after the door opened. I have no idea what causes that to happen...

Battle of Yi Ling: 2'03"06
Most of my attempts with this stage found Lu Meng and Cheng Pu to be the Great Equalizers. If I didn't screw up Cheng Pu like I did, I could've gotten the final gate open before Zhuge Liang's message appeared. Getting a nice kill on SUn Jian also helps, and he went far better than my previous submission did.

Battle of Wu Zhang Plains: 3'46"25
This is another stage that went far better than my previous submission, with quicker kills on the Gate Captain and Sima Zhao. Unfortunately, my Sima Yi fight was a bit less than ideal, and Cao Cao decided to hide behind some rocks just before dying.

Battle of Xu Chang: 3'31"21
Everything went better than my rejected submission in this stage, except for getting on Dian Wei's horse and Cao Cao's position inside the castle. It would've been hilarious if I was low enough on health that the final fodder could've killed me after I already won.

Stage comments:
Yellow Turban Rebellion: 0'57"40
It's pretty much equal distance to Zhang Jiao compared to the Wu starting spot, except this one sucks cause of using a character that is dreadful on a horse. I never expected to be able to kill Zhang Jiao with one gauge, considering how far away he was and how much be bounced around.

Guan Du: 3'40"61
Pre-Yuan Shao was ok, unfortunately Yuan Shao himself was not. He bounced on the ramp immediately, and took refuge up there. The fight was less than ideal afterwards. To make Yuan Shao appear, you need to defeat both Wen Chou and Yan Liang, but the second must die after Guan Yu "comes out," which he does only after Wei Xu and Song Xian die. If you kill Wen Chou and Yan Liang before the two Wei soldiers die, all enemy officers must be dead before Yuan Shao appears.

Chang Ban: 0'55"41
Picking this stage avoids Tong Gate. It is just *barely* faster than Tong Gate, assuming you don't get a bad start. I got the good one, and Liu Bei was quickly dismissed.

He Fei: 2'50"60
Took a little bit to beat Sun Jian for the first time. Other than that, the stage went pretty well.

Wu Zhang Plains: 3'24"31
Here I must switch to Shadow Harness because I need to be able to stay mounted once Jiang Wei is dead. Zhuge Liang will not re-appear until Sima Yi reaches a certain point on the map, which is conveniently on top of Jiang Wei's spot. Also, FUUUUUUU Jiang Wei!

Cheng Du: 1'38"41
I keep Shadow Harness because I need to navigate the minefield, and then I need to face the prospect of fighting Jiang Wei, Guan Yu, Zhuge Liang, and Liu Bei all at once with very low health.

Because there's no indirect attackers on Wu's side, and since DW4 added the only other character that can attack on one side while mounted, your choices are limited to 1. God's cousin, Zhou Tai.

Stage comments:
The Yellow Turban Rebellion: 0'58"75
99% of attempts never made it through this stage, 98.9% of them because of Zhang Jiao. Either I didn't have enough Musou Gauge when I got there, I Musoued too early, completely whiffed with attacks, or I was knocked off the horse. I wish I would've noticed the War God's Axe sooner than I did, because a 2-round Zhang Jiao may have been possible.

Battle of Si Shui Gate: 2'21"91
Picking this stage avoids getting The Emperor's Seal, which is 15 minutes of boring crate smashing. Fan Chou could've gone slightly better, and with some luck you can get back to Si Shui Gate before it opens to help reduce lag, but it didn't happen this time. Li Jue could've gone marginally better as well.

Battle of Hu Lao Gate: 2'50"35
Both Wu starting points are closer than Shu's starting points relative to the gates, and I got the worse one this time around. Annoying, but manageable, and this is where I make the switch to Shadow Harness so God's cousin can wreck stuff. A run killer can happen if you don't beat Guo Si before Li Ru says "Your overconfidence will be your downfall!" or if you kill Guo Si's sub-officer causing another "Officer defeated" message which only wastes time. I also had a freaking perfect Diao Chan and a pretty good Dong Zhou fight.

Assault on Liu Biao: 1'35"53
Picking this stage avoids getting Unification of Jing, which just isn't as fast as this one is. With Red Hare, you can get to Liu Biao much quicker, but you will not be able to stay mounted, so the time evens out with the Shadow Harness.

Unification of Jiang Dong: 1'52"25
Liang Gang was kinda meh, but considering how easy it is for this stage to run-kill you, I took it. Normally Liu Xun will get hung up right outside the gate, but the g'fooker kept on charging like he wanted to get somewhere. I also had "let go of L1-itis" so I kept shifting my camera angle, and whiffed some.

Battle of Chi Bi: 1'18"56
Unfortunately, starting position is worse than Shu's, so cutting the minute is likely out of the question. Cao Cao had a slight miscue just before he died, but overall it was a good stage.

Battle of He Fei: 1'48"36
For the longest time I considered switching to Red Hare here because I knew you couldn't get all the way to Cao Cao with it, but as megastump reminded me on stream during a practice session, Shadow Harness allows you to stay mounted, even if you discard the original horse. That's not a detail I normally forget, so I'm glad I got the assist. As for time-wasters, if you fail to kill the Gate Captain before Zhang Liao starts talking you lose about 7 seconds. By the way, trees are powerful magnets.

Battle of Yi Ling: 1'48"46
For a run going as good as this one was, I was sick to my stomache after struggling with Liu Bei like this.

Battle of Cheng Du: 2'29"81
If you get the lower starting position, the run is over. It takes longer to get Liu Bei to appear, plus you have to go through a minefield which will lower your health to about 10%. I'm still not 100% sure what causes Liu Bei to appear, but I suspect it's tied to the ambush parties in the forest. I exact my revenge on Liu Bei for the crappy Yi Ling...