Released in December 1982, E.T. The Extra-Terrestrial is the original terrible movie tie-in game. Being at best marginally related to the plot of the movie, having poorly designed and repetitive gameplay and leading to plentiful disappointed children cursing their parents the week after Christmas this game perfected the licensed cash-in years before it became mainstream in the industry. 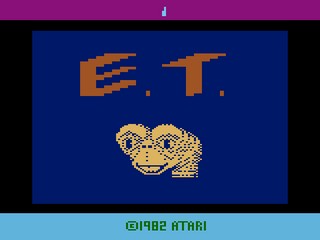 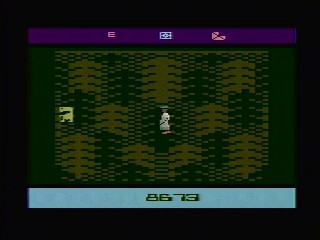 ~About the Game~
Despite being considered as one of the worst games of all time and being linked to the Video Game Crash of '83, "E.T. The Extra-Terrestrial" is in fact my favorite game on the 2600.
~Notes on the Run~
The biggest thing of note for me is that this run is faster than the TAS for this game which I'm very proud of.
-  I use a Sega Genesis/MegaDrive controller instead of the regular Atari joystick because those are unbelievable bad.
-  The way that the phone pieces work is that they are set based on the frame when the fire button is pushed on the title screen. It just so happens that the best pattern is the very first frame, so all you do is hold the fire button down while starting the system for the optimal pattern.
-  For all the pits, I try to enter them at specific angles as to limit hovering time coming out of the pit. (Usually with the furthest out pixel of the pit with E.T. head or foot)
- After picking up a phone piece in a pit, sometimes the game won't recognize my input to hover. That didn't happen in this run which is a good thing.
-  My route differs from the TAS's with the use of the Teleport spots to quickly traverse the screens to save an estimated ~1.3 sec.
-  The FBI agent (yellow guy) does 2 things. 1. He steals a phone piece (which doesn't matter after you make the call) and 2. If he is on the screen when the clock reaches zero, the space ship won't appear, thus killing your run. To avoid this from happing, I walk to the next screen over which I believe resets his spawn timer. (I haven't done any test to confirm this, but I do it anyway)
-  The allow the scientist to carry me off to the city screen because it worked out timing wise to avoid a FBI agent from spawning as the ship is about to touch down. (No FBI agents can spawn while you are being carried)
Thanks to...
All the people at SDA for their dedication
Presjpolk for bumping the E.T. thread which motivated me
SDA for hosting this run and being a cool website
That guy that sold me his boxed Atari with this game
Howard Scott Warshaw for programming this game
And the Speed Running community for being awesome