Developed in 1992 by Wolf Team, Earnest Evans answers the burning question of what would Indian Jones be like if Indy's bones were made out of rubber. Earnest Evans flails his way from a ancient buried ruin in Maine to exotic locals all across the world. 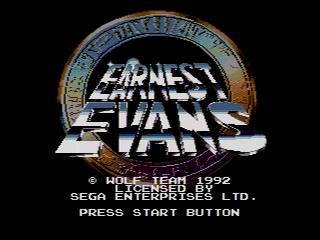 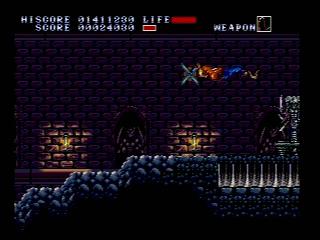 Ah, Earnest Evans. Seeing this silly gem at AGDQ 2013 piqued my interest and I ended up buying a copy not too long after. I'm still not sure whether I'd classify this game as objectively good or bad but it's definitely a lot of fun to play and run casually...not when grinding for speed attempts.

Running this game seriously (don't do this btw) relies on tons of RNG and things that are mostly out of your control: boulders, enemy placement, enemy patterns, etc. There's so much that can go wrong and cause a reset even with perfect playing. I've grinded on this on and off for about a year and this was the cleanest run I could get without luck completely dicking me at one point or another.

A few points of interest:

Stage 1: I had good execution starting out, everything up the death boost through the door was smooth. The boss bounces around based on which part of the screen he hits so you can use that to manipulate his movements. I didn't get the best manipulation but it was still a pretty quick kill and no boulders blocked my path towards the exit which was nice, overall a solid stage.

For anyone wondering, you can get a time about 4.5 seconds faster if the manipulation is perfect and a boulder falls on top of you on the first floor to push you to the exit. Good luck seriously getting that in a run though.

Stage 2: Lag comes into play right off the bat here, the vines can move in random spots and where they move determines how badly they lag the game. After some testing, I actually found it was faster to destroy the first two vines and eliminate their lag entirely instead of running by and praying and can still catch the platform cycle before the worm climb.

The TAS doesn't grab Indy hat in the hidden room but I've never had consistent kills on the boss without it so it's worth the two second detour. Aside from some bad lag luck after killing the boss, this stage went really nice.

Stage 3: Quite an annoying stage to run, there's a lot of luck in where enemies move and even if Evans wants to cooperate in moving. The key to going fast in this stage is crouch as little as possible so there's a bit of optimization with jumping and moving in ways to skip the crouch animation or keep running speed while jumping through narrow corridors. The stones kill all the normal enemies in one hit and are needed to quick kill the boss so they are definitely worth picking up.

Missing the spike platform cycle didn't cost much time, the boss kill was smooth, and I didn't die so overall a decent stage 3.

Stage 4: Ah, this stage. Whether the run ends here or not comes down to the boss giving a good pattern, very little else in this stage is random. I didn't  get quite the right angle off the pulley launcher (or whatever it is) and couldn't grab the upper ledge immediately but everything else went okay. The death was intentional to refill my health so I could crash through the floaters and despawn them as soon as possible as well as give a little insurance in case the boss gave a bad pattern. As you can see it wasn't necessary because the beams completely missed but hey, better a bit of insurance than miss the quick kill and lose ten seconds.

Stage 5: I wish more games had a "hold left for an instant shortcut" stage haha. There really isn't much to this, boss pattern is really the only thing that affects the time in this stage and he gave me reasonable luck on it, not perfect but still reasonable.

Stage 6: Another low-luck stage thankfully, this one is generally pretty consistent on time. For whatever reason being in mid-air when the car crashes hurls Evans forward, not sure why but I'm not complaining. All of the Guile imposters gave average luck with getting off the screen before lagging too much but they can't affect the time much anyways so it's not a big deal. Airship kill was fine, no complaints there.

Stage 7: Ugh, this stage sucks. Whether you take enough damage to die or not is luck and unfortunately I did not luck out here, though I mitigate that a bit by taking a death boost in the correct direction.

Killing the first two worms is important because otherwise they just come back later in the stage and tear you apart. I've actually never missed killing that first one before though, not sure how I didn't do enough damage the first go-around.

Stage 8: Another potential run-ending boss if you get bad luck, bleh. He moves whenever he feels like it even when off-screen so it takes a good deal of luck to get a good time here. I luck out though and get one of the best patterns I could hope for, killing him roughly five seconds faster than my average.

Stage 9: The two biggest time-savers in this stage are catapulting over the tree and getting a decent worm manipulation for a fast kill.

Cue another instance of "that's never happened before" because I managed to grab the right vine for the swing and then forgot to push up before jumping, oops. Ended up having to take the backup strat and roll through the base of the tree instead, losing about three or four seconds.

The worm and plant fights at the end went fine and lag was much lower than usual in this stage so I can't complain too much but that missed boost will haunt me forever haha.

Stage 10: What a silly stage, the exit trigger is normally at the bottom but the stage wraps around vertically, so touching the top tells the game I touched the trigger and I beat the stage. I guess one thing to note is that missing this trick ends the run because playing this area normally is horrible with all the lag and snakes blocking the path.

Stage 11: And finally we come to the big run-ender of the game, the most ridiculous fish in Genesis history. Where he moves is completely random and he generally just runs away faster than you can chase so runs have ended through no fault of my own. He didn't play terribly nice and I lost a decent chunk of time but it was still fast enough to continue on.

For reference, here's what the fight looks like when he's actually cooperating: https://www.youtube.com/watch?v=4MyLq4mmMP0&list=UUGGsDvdEMLHB5HDgV-jl8Og

Stage 12: Ah, a boss rush to end it all. I was quite nervous coming out of the last fight thinking bad luck would continue and I'd get screwed out of a time but that did not happen thankfully. First two fights went perfectly, couldn't ask for more on those. The last fight against Hastur I take an intentional death during the spawn animation and then use the invincibility frames to whack away as much as I can. He didn't give me the fastest pattern but it was still good enough with only a couple of dive bombs and plenty of chances to hit the head. Good finish to the run.

Can this run be improved? Definitely. Will it be improved? Not without a ton of grinding for EXTREMELY favorable RNG. The sum of my best splits is 8:04 and that's just not reasonable to expect in a single-segment run of this game. I can see sub-8:30 being possible but I've lost enough sanity to run this game any farther, best of luck to whoever picks this up next.