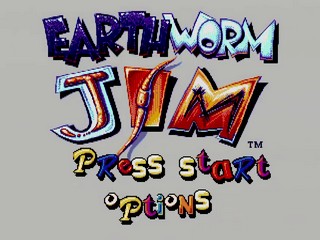 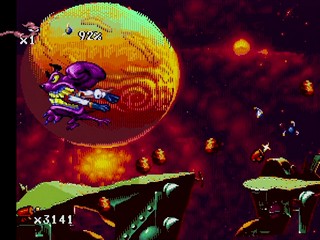 I really didn't see this run coming at all. I was just doing normal marathon practice for SGDQ and then this run comes out of nowhere. Overall, it is a very good run, with only a few bad spots.

If you saw the previous run I submitted to SDA, you may notice that there are multiple new skips, along with small timesaving changes in almost every level. These wouldn't have been found without the help of everyone in the Annelids with Attitude group, so a big thank you to everyone there.

New Junk City starts off alright, although I don't get the spike jump or the chain jump at the beginning. A new strat for Junk Thing was found a few days after this recording where you use 1 plasma instead of 2, but it saves less than 1 second so not having it is not a big deal. Overall, maybe 1.5 seconds from optimal, mainly from missing the spike jump and having non-optimal tire bounces.

What the Heck? is the first of 2 poor stages in the run, as well as the only level with major RNG. This is also the first level featuring a new skip compared to the old run. Instead of whipping through the ground after the gate, I just jump on top of the gate while it's going up and bounce through the ceiling, skipping the entire level. Everything goes great up until the Evil the Cat fight, where I get destroyed by RNG. Overall, I could save around 20 seconds on the level, all of which would be from better RNG on the Evil fight.

The next level is the second of the poor stages in the run, although it is much less noticeable than What the Heck?. Everything starts out good in the level, with my health staying at a good value throughout. Then, towards the end, I go for airless in the second pod section like normal, and everything goes great until I accidentally hook onto the last air nozzle, losing maybe 2-3 seconds. This wouldn't be a concern to me except I was only 1.5-2 seconds away from sub-28, meaning this air nozzle made me lose sub-28.

Tube Race went nearly perfectly, if I had not messed up towards the end of the pod section I would have definitely ended with 50 air left, which is nearly perfect.

Snot a Problem has the first difficult trick in the run, the 3-round 1-drop, where you kill Major Mucus on the first drop in all 3 rounds. Although there is a sort of setup for each round, it still is difficult to do. Thankfully, I got a very nice 3-round 1-drop, and although it could have been a second faster due to not getting a perfect round 2, it was still very good.

Level 5 went very good, with only a .5 second difference between this run and my best segment time. If I had gotten the whip jump right before the mesh ball section I definitely would have gotten a new best segment time. The jump off the chain through the platform at the end of naked worm is a 1-frame trick, and I am very happy to have gotten it in this run. By grabbing both mega atomic energy orbs you can basically run through the whole section before the chicken fight without stopping. Overall everything went nearly perfectly.

For Pete's Sake is the biggest difference between my old run and this one. Instead of whipping Peter Puppy through the whole level, you just send him to the pound right off the bat. When Peter is grabbed by a tentacle, the game despawns him, causes the tentacle to explode, and then spawns him back in his demon form. During this process, there is one frame where Peter has been despawned but the tentacle hasn't changed states yet. During this one frame, if you walk far enough away from the tentacle to despawn it, it never has the chance to explode, meaning Peter is never spawned back into the world. This should be useless, considering you are supposed to put Peter into the doghouse to trigger the level to end, but if you walk to the very end of the Advanced section and walk past the second doghouse, there is a trigger that will let you end the level without Peter going in a doghouse at all, meaning that after you despawn Peter you can just run to the very end of the level without stopping constantly. Overall, despawning Peter saves about a minute. You might notice that I didn't go back to check whether Peter was despawned or not, which I was doing in every other marathon practice run. The reason for this was both because I was having a great run, and also because I was fairly certain I had gotten the despawn.

Intestinal Distress went excellently, considering I entered with less than 100% health and ended with more than I normally would. Not only did I barely get hit throughout the level, I lost very little time. There is another whip jump when I grab the 4 plasma blasters, but if you fail it you fall down below and lose a lot of time, so I didn't go for it. Jumping over the wall before Doc Duodenum saves 3-4 seconds, and shooting him with 3 plasmas makes the fight trivial.

Finally, Buttville and The Descent. The Descent went perfectly, with no hits taken, meaning I was at perfect health for Buttville. Right off the bat there is a new skip with the spike wall, meaning you skip going on the upper platform completely. The 2 plasmas grabbed at the beginning of Buttville are very important at the end because they instantly kill the Queen's butt, and although only 1 is needed, I keep 2 in case the first misses. Jumping through the wall worms without stopping only works if you go through in a specific way. You can't jump too high or the worms come out and munch you. Thankfully, I made it through with no munchings, killed the Queen's butt perfectly, and then whipped the Queen after damage boosting on the spikes to finish the game.

(NOTE: I use SRL timing (timing starts when you hit Start on Main Menu) instead of SDA timing (timing starts when you take control of Jim), meaning my timing is almost exactly 3 seconds slower than with SDA timing (Both timing methods end on whipping the Queen). Because of this, although my time listed here is ~27:58, with my timing standards it's a 28:01, which is where the next paragraph comes from)

Although I'm 1.5 seconds off my final goal was sub-28, I may leave it at this run until another major skip is found. I am very satisfied with this run, and even though there are some minor mistakes and some bad RNG, overall it went better than I could have hoped.

Thank you for watching, and remember, during his short-lived rap career, Jim was known as M.C. Sweet N Low.