Released on July 29, 2002 for Xbox and March 11, 2003 for PC, Enclave is a third-person Action-Adventure RPG fetch-quest platformer and money management simulator. Despite the genre, Enclave is a pretty cool game. The story revolves around a complicated stand off between the powers of good and evil (read: Light and Dark factions). Each side has its own unique levels and missions, with the overall theme of "enter room, kill x amount of enemies, maybe pull a switch, move to next room." 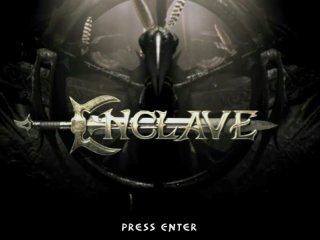 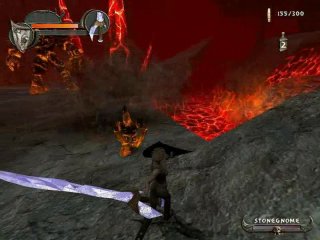 Easy difficulty with the light side 0:45:19 by Nicolas Deußer, done in 14 segments.

First I have to thank the whole SDA Team, first for giving me the info I needed to post my work and second for making such a great Site.

Then I have to thank my good friend Joerg Runge, who lend me his Computer for Recording this Run, which was a hard time for him, because he is an World of Warcraft addict (I used to be one too, but now I am clean). And, last but not least, thanks to the dudes in the Forum and the Speedrunnners who inspired me with their great work, like TSA, Spider-Waffle, Bleeding Snow, The Void and so on.

Some words about me, I am a German (so please apologize my bad english) college-student (political sciences, philosophy, media sciences) who loves to watch Speedruns, and so i decided one day to make my own with this Enclave Game.

This is Enclave, a game from the swedish Gamestudio Starbreeze. They made some other Games, some with swordfighting (Knights of the Temple), others in a SF Scenario (Chronicles of Riddik, a Game the most of you will know). Their project in the moment is The Darkness, a Shooter which I am really looking forward to...but back to topic.

I set me some goals I wanted to achive in this Run:

The cool arrow shooting moves didnt get into the run, because i had a good time OR cool moves, but never both...I hope you enjoy this one too.

The Gold is a Problem in this Game, you need it to buy your stuff at the beginning of every Mission (except Light Mission 1 and 2, and Dark Mission 1), and with less gold you get only some crappy weapons and a little shield, which makes it all a bit difficult. So I needed to take all the gold I would need for the following missions, but on routes which arent too far of. And you keep every piece of Gold through the entire game, so its a very important thing. But there are 3 things which make it easier:

2. You get money for completing Misisons, normally the maximum of which you can find in the Mission.

3. You get money for collected items. There are not many, and only in 4 Missions in the first Campaign, and in the first two there are nearly worthless, but better than nothing. The Ice Sword in Level 6 and Mordessas Sword in Map 13 are real killers with 1200 Gold.

So, with this said, just one or two words about the Gamemechanics: The Melee fighting is nice, and when you know how it works, you can use the combo system to your advantage. The last hit on a Combo with the Weapon is always the one with the most Damage, which is graphically shown but a shockwave/magical burst or something like that. This is the reason why I sometimes start to attack, even if I am some meters away from any enemy. But even in melee the attacks are not really accurate, sometimes the clipping doesnt work right or something like that, and you should have hitted the target, but the weapon went right through him. This most often happens in really close combat.

The next thing which I really like, but only one Time use in this Run, is the bow fighting. With normal arrows and fire arrows you can do the Legolas and shoot up to 8 arrows at once with your bow, which has devastating effects. You also can use Sniper arrows, whith which you can zoom on enemys to hit their weak spot.

And I also have to name another thing: The AI. The Artificial Intelligence is pending, sometimes interesting smart, sometimes stupid as a bucket full of sand. When you are running towards an enemy with bunnyhopping, then they mostly will start jumping too, which is really annoying, but good programming. So sometimes the enemys look like bots in multiplayer games. To change AI scripts I often attack enemys without killing them, so they change their standard behavior and begin to get a bit cautious. this is especially very helpful with enemys with ranged Weapons, like crossbow and longbow. Sometimes it suffices when you only push them 2 Meters behind, so they get another angle and don't hit a thing. Okay, to be honest: Sometimes they wouldn't even hit the water if they were sitting in a boat.

But now directly to the comments on the Run, with an Time Index at hand:

So, i hope you have enjoyed this little piece of speedrunning. If you liked this, which you must, cause you are still reading the bullcrap i write, i highly recommend you to see my run on the dark campaign, which is far better. This has two reasons:

1. The Missions in the Dark Campaign are shorter, but more challenging. So a speedrunner get some cool moves in it, with far shorter times than in the light run.

2. I say so. And my commentary will be less long, cause the run is only half the time than this one, and the AI and Gamemechanic issues i allready postet in these commentarys.

At last I want to thank you for watching. You are the person(s) who I made this movie for, and I hope you will enjoy my future works.

And I want to apologize to every addict (in any form...I know how you feel, I once smoked cigarettes and drank far too much alcohol), hermaphrodite, evil Overlord, Dark Army General with big hooters, every person who ever wear sexy underwear and all others who feels offended by my comments. It's just for the joke, don't take it seriuos.

I'm Kahless The God of Akimbo, see you all soon.

Huge thanks again to the whole SDA staff, and of course thanks to Kahless_GOA for his Enclave runs. Because of his runs I got interested in the game, bought it, had a great time playing through it and then I decided to improve Kahless_GOA's Dark Campaign first (Light Campaign will follow sometime in the near future...) because it was the shortest of the two campaigns, although not entirely the easiest ;)
A big improvement factor of my run compared to Kahless_GOA's run is the fact that I don't collect ANY additional off-track/timelosing money. It's not needed, you can get through all the levels without the extra money (Even on Hard, as shown in the run). Then there are also some tricks and shortcuts that I found and also some more precise playing.

With permission from Mike, I've edited out the map and equipment screens in order to make the video more pleasurable to watch. Those parts are included in the timing of the run though, but I'm skipping them very fast so watching them everytime before a level started wouldn't really be satisfying to watch in my opinion so I edited them out. Now it's just pretty much a nice continuous level watch. I hope you agree :)

The Enclave thread can be found here in case you feel like commenting on the run or asking something.

Some general tricks in the game:

Everywhere in this game you can very easily get stuck, walls/corners/doors/objects/enemies and even the ground. In some levels it was different though, meaning that you can get stuck even more in certain spots... Level 11 "Ungard Mines" was very annoying to attempt because of this, because it interrupts the flow if you know what I mean.

The following is a little bug in the game. When you've prepared multiple arrows on a bow and then drink a Health Potion, the amount of arrows is reset to 1 (A good example is near the end of level 3 "Surprise Attack", hehe). Switching to a different weapon or arrow type before drinking a Health Potion solves this issue.

Another thing is that in the levels where you can find weapons, you don't have to pick them up to get payed for them at the end of the level (Like in level 1 "Zurana's Crystal" where I'm not picking up the Dagger and Crossbow while still getting payed for them, and they're in my possession after level 1).

Thanks for reading the comments (If you did) and I've cut down on the text a bit because it always takes ages for me to finish writing comments :D The speedrun can be improved a bit and most likely I'll try that myself again sometime (As with all my runs actually...). I actually intended to try to improve the levels after I would've finished the last level (Because the game autosaves and the amount of gold is the only thing that needs to stay consistent so I could redo any level) but I got so fed up with the enter button mashing I needed to do for each level in each attempt to skip the map/equipment and stat screens as fast as possible, so I decided to declare the run finished. I hope you enjoyed the run if you already watched it, otherwise, enjoy ;)