A minuscule particle in the expansive ocean of flash browser games, Epic Battle Fantasy 2 offers a solid and rather entertaining string of battles against various misbehaving bands of strangers and their commanding officers. Flash games age slowly (or progress slowly, whichever you prefer) but it was, for the record, released in 2009 into a series that's still receiving new titles every few years. The fighting happens in the staple JRPG active-time formation with random extra perks doled out at steady intervals for customising your characters on the fly. 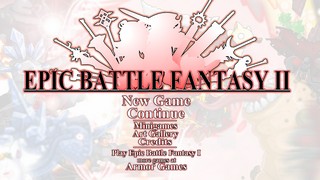 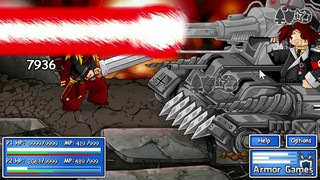 Epic Battle Fantasy is a series of turn based flash RPG battle games. For anyone interested in checking it out, I suggest playing EBF 3 first, then EBF 4 via the creator's website:
http://kupogames.com/

Audio commentary for this run is available at my Twitch channel:
http://www.twitch.tv/iicrowii/v/8331919

This is a speed run of EBF 2, which does not have an overworld or traditional RPG growth methods. Instead, at the end of each enemy wave, you select one of 3 skills, with your choices based on what happened during combat. The skills that appear (and the position of the skills in the menu) are not consistent, so I need to do some quick decisions during the level up screens. Also, I have to be careful how often I use attacks which I don't intend to upgrade - if too many skills have been unlocked, the ones I really want to select may not appear.

On Epic difficulty, the enemies' attacks become very strong and gain bonus effects, but their health doesn't increase. My strategy is usually to let a good offense be my defense, though there are a few exceptions.

Statistic buffs are capped at 65%, and Kyun (Natalie's limit break) grants +40%. Therefore, to do maximum damage, I ideally want to have at least a +25% buff already in place before I Kyun.

I do not require the money that NoLegs can get during the mini games, so I die as fast as possible. It is possible to get like 100 extra gold at no time cost by attacking enemies while dying, but this runs the risk of a heart drop which extends the mini game.

Matt can be built as a mage instead of a physical attacker, which works well for a lot of the game since almost every enemy is weak against Bomb elemental attacks. I've found it to be slower overall than the physical build, however.

The otherwise powerful Stone Edge and Blizzard weapons have low accuracy, which is a big liability in Epic difficulty. I therefore require the Eagle Eye skill, which is unlocked by using the positively terrible Swift Brand weapon. This wave is the least dangerous in the game, so I farm that skill here.

NoLegs's bretheren randomly have a shield or don't; those who do have a shield take much less damage for the first attack they take.

I want my characters to take damage so that their Limit Breaks will be available during the Guardian fight. Buffs persist from one wave to the next, but not through the save points. The Limit Break bar survives even through save points.

This wave is basically just time to set up for the Guardian fight. I equip the Anarchy, as it has good damage, and applies an Attack debuff on-hit, which can be shared with other weapons by learning the Sword Breaker skill it unlocks.

Between the previous wave and this one, I do some "unnecessary" Legend attacks so that the Legendary skill can be learned here, in time to be used against Guardian.

If the sword arm is allowed to attack, I am generally dead even with Kyun's buffs and debuffs, so keeping that down is the top priority.

The game intends you to stun or seal Guardian to stop it from restoring its arms, but in Epic mode this is much more dangerous than just going offensive, since the boss is much more resistant to the status effects. Some time might be saved by grinding for a rare 2 turn stun from the Stunner item on the first turn, then Pulsar-ing the arms away before it gets to do anything.

I continue runs where Guardian revives his arms up to twice. This run was lucky and Guardian didn't heal at all.

This is mainly just setup time for the next waves. Anarchy's Unleash can remove the turtles' defense buffs.

I had Natalie go first against the first turtle because I don't usually cast Judgement on this wave, so I didn't know how much damage it would deal. It was enough to kill the turtle with a basic attack, but not enough to finish it off with Wind Slash.

This boss randomly starts in either its Fire or its Ice form, and it alternates between the two every few turns.

The real danger here is the Bomb helper. If it is allowed to attack, my party is almost assuredly dead. In this run, the Bomb helper spawned instead of the Ice one, which made this fight take one turn longer.

I start transitioning from offensive stat upgrades to defensive ones, both because the game imposes diminishing returns, and because I need the defense to survive the last third of the game.

The goal here is to set up to snipe the Sandworm quickly. Depending on how limit break timings went prior to this point, my stat buffs could be running low, which can make these enemies dangerous. I must enter the next fight with both limit breaks either ready or close to it, at least a 25% attack buff on Matt, a few turns of Regen, and the Blizzard sword equipped.

The Sandworm's poison attack is brutal. My plan is to win before that attack is used twice - so long as I have the Bunny! upgrade, I can survive one but not two stacks of this boss's poison. Kyun does remove poison, but I require its stat buffs / debuffs to survive the fight in general, so I cannot hold it in reserve for poison removal.

In this run, Sandworm doesn't use his poison attack at all, and neither do any of his other problematic status ailments hit.

I hesitated before using Attack to kill the Sandworm. I was considering whether Wind Slash would kill both targets, and whether I had to use a stronger skill than a basic attack.

I could probably save a few seconds by buying less here - a run which requires that many curatives isn't going to have a competitive time, anyway.

This wave sucks. The Spirits begin with (and, on Epic difficulty, frequently refresh) Autolife status, so I need to either use Anarchy's Unleash attack, or hope for good RNG on Natalie's Judgement attack to remove that before killing them. In practice, relying on Judgement is not fast, reliable, or MP efficient, so I have to have Matt swap swords twice during this fight - once to equip Anarchy, and once to switch to something that is effective against the Zombie Hydra. Specifically, I equip the Heaven's Gate, which unlocks the Mighty Warrior skill which increases stats.

Also problematic is the Seal attack, which I have to answer with either an Antidote or a Purify from Natalie. Too many seals in a row could kill me, and every seal is a time loss.

I want Autolife on at least one of my characters heading into the next battle, as instant death is the name of the game there.

Natalie was given a pretty useless set of skills after this wave. I took Bunny!!!, which randomly sets up (or refreshes) Regen, which either saves me a turn or costs me time for no benefit. During this run, I had one useless activation and two useful ones.

On lower difficulties, you can negate a lot of these enemies' attacks by blinding them. On Epic difficulty, landing a blind is much rarer and doesn't incapacitate them nearly as well regardless. So, I instead abandon the usual survival methods in favor of simply reviving characters as they die - ideally, preemptively via the Autolife status.

The upside to this is that the instant death attack works by dealing 99999 damage, which fills the Limit Break bar completely. Dying to the repeated bites attack does a pretty good job of filling the bar too. This run features an abnormally low amount of death during this fight.

The other gimmick to the fight is that if one head is dead, the other has a chance of reviving it each turn. I therefore must try to kill both of them at about the same time.

After the fight, I had to decide between the Angel and Mighty Mage skills. It's possible that Angel's autolife would have been better than the stats, but that would have come down to RNG.

These two groups are the hardest fights in the game. These "normal" enemies have a drill attack which will usually one-shot the target. There's also a single Spirit enemy which is awkward to remove and threatens to use Seal, which is devastating if the Flybots are still alive and still time consuming regardless.

I have to prepare for the next fight while withstanding the onslaught of enemies who could easily be parts of the final boss if they had more HP. In this run, I take the risk of spending a Kyun here, which means it isn't available for the beginning of the second phase of the final boss, but it definitely paid off here.

The Immunity skill, which usually protects Natalie from status ailments, finally shows up here. Given which turrets I encountered during the final boss, this was very important.

The first phase of this boss is a straightforward fight as long as he doesn't reduce the party's defense buffs to negative levels.

The goal of the main phase is to destroy the body of the tank. Damage dealt to either of the helpers will also deal some damage to the main tank (such that casting Pulsar while both helpers are alive scores big damage).

As the tank takes damage, the likelihood increases that it will spend its turn summoning a replacement for one of its helpers. All the helpers are potentially dangerous. Lance can use your summon Ion Cannon, and on Epic diffculty, the Nuke launches on its second turn. The other helpers are mainly dangerous for their status effects.

Worst of all is if both helpers are dead at once. This allows the tank to use special attacks (like in the first phase, but stronger), or on Epic difficulty, it may summon two Nuke helpers at once. The 2x Nuke spawn is a huge time loss and leaves me without Regen (since I have to use Autolife + Defend to survive).

In this run, I have to revive Natalie multiple times, but otherwise this fight was quite good. I was able to keep the tank down to one helper most of the time, I only had to stop to clear status effects once, and I didn't have to deal with Ion Cannon or Nukes.