Released by Armor Games in 2010, Epic Combo! is a flash game where you unleash brutal violence upon unsuspecting turtles. Starting with a single hammer hit you knock the shelled reptiles off of as many strategically placed hazards as you can afford to chain together as many bounces as possible. 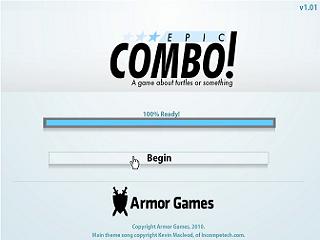 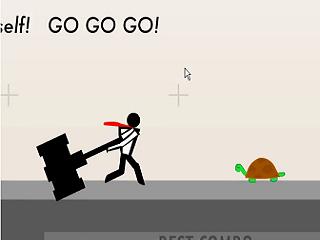 
This is my run for Epic Combo. I first watched a previous run while it was on verification and wanted to check the game out. After a while I beat that run so I started playing this game more seriously and an hour later I got 2:57, so I decided to start recording.

Epic Combo ended up being a very luck-based game due to the randomness of the turtles shooting off the buzzsaws. This alone made the run pretty hard to do. The 'manual timeout' button is a bit glitchy as sometimes it doesn't take any mouse input (killed a few runs), and the combo number makes it unclickable on certain frames.

The strategy I came up with is to get a proxy mine first and then smash turtles until all three valves are open, which is 3 seconds faster than not having one. Afterwards I unlock things a lot faster than I normally do, especially getting those three valves on level 5 within a minute. The buzzsaws' setup in this run is the most optimal one I found.

The reason why I wait a few times for a second or two after levelling up on the valves is because the game actually needs to start producing turtles and I want more on the screen, so it's faster to wait a bit.

I'd like to thank SDA staff for putting on a lot of time and effort into this site, and to you for watching.