Released in May 1999, Star Wars Episode 1: Racer was the racing game which was based around the fast Pod-Racing sequence from the movie. It features levels from the Boonta Eve Classic course from the movie, to wild levels like the inside of a volcano or a jungle. It also features all the pod-racers from the movie, a customizing feature to upgrade your pods, and an intense multiplayer mode. 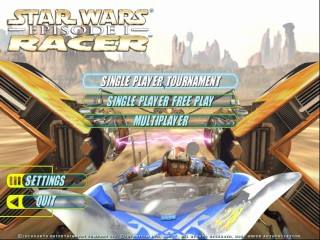 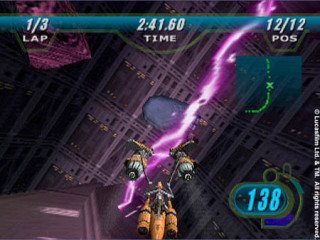 Note: Lap times without a link are in the same videos as the full race.

Star Wars Episode 1: Racer is an excellent racing game that never really got the attention that it deserved. I've done individual level runs for each track in the time attack mode of the game.

A few things to clear up for the casual viewer:

I used a gamefile with the tournament completed to get these times. Basically if you win a race in the tournament mode you unlock it in time attack, the track favourite will be added to the selectable podracers and you win money to buy parts for your podracer. Any part you buy will be used for all the podracers in the game. However that is limited to the best parts available that become unlocked towards the end of the game. So, if you have these parts all podracers have their stats to the maximum of their abilities. Anyone who has the tournament fully completed will end up with the same podracers.

All runs were done on the PAL version. There is no difference in speed between the PAL and NTSC versions of the game.

I've spend many hours on finding the best strategies for each track which basically involves a few things. Being able to boost as often and long as possible, surviving the whole track and looking for shortcuts along the way. I'm satisfied with the results overall as nearly all my times are now the current WR's.

I used Ben Quadinaros for all the tracks with long straights and not too much difficult corners because he has the most powerful and longest lasting boost in the game, only his steering ability is quite bad.

I used 'Bullseye' Navoir for all the other tracks because he has excellent steering and a relative powerful boost. His only downside is that he is quite weak so careful driving is required. If you see me slow down a little much for a corner on tracks like Grabvine Gateway, where it's more like survival in the jungle than podracing, it's because he has to go three laps. If you go all out on the first two laps, chances are high that you can say goodbye record because you'll get destroyed in the last few corners.

Two shortcuts that stand out from the rest are the ones I found on Bumpy's Breakers and Inferno.

1) On Bumpy's Breakers I found a way to skip a large portion of the track by simply jumping on the track below the first jump. This is a lot trickier than it may sound as it requires very precise timing. Pressing the gas a millisecond too late in the air basically means end of the run.

2) On Inferno I found a way to skip a large corner around a big rock by going over that rock at the beginning. Just like Bumpy's Breakers it may sound a lot easier than it's done because a lot of times the game lets your podracer just randomly crash even if you're going very slow. I found a way to prevent this by going only over the brown part of the rock and in a very straight line. After that the track beyond the rock isn't fully loaded yet so I jump to the nearest part of the track that is.

Not much else I can say except: enjoy the runs!