Released in 2007 for the Xbox 360 and 2008 for the PS3 by Tri-Crescendo, Eternal Sonata is a role-playing game where you explore a fictional dream world conjured up by famous pianist and composer Frédéric Chopin on his death bed. He's a playable character. In his own dreams. How meta is that? 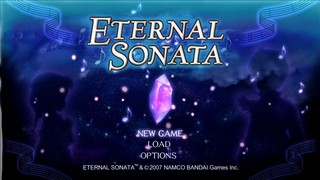 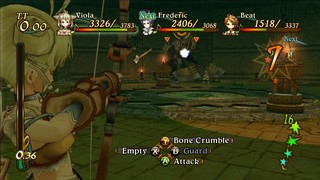 Runs on the PlayStation3 version:

My comments come in the form of a brief Q&A. Thank you all for watching!

Also, special thanks to:

Sir VG & ciddypoo from the sda forums - for showing interest in my run and in this game.

ElevenFour and DomZ Ninja - for their guides on gamefaqs, especially for the great maps.

Tri-Crescendo for making this wonderful and very enjoyable game.

Q: Hey, why aren't you running the PS3 version, it's harder and has extra content?
A: I completed the original run on xbox (written up on gamefaqs but not recorded), before the ps3 release,
and I wanted to come back to the same game.

Q: Wouldn't an RTA run be much more interesting?
A: Sure, but someone else is doing that (look up ciddypoo), plus I don't like playing for prolonged periods
of time, I need to take breaks ;p

Q: Which characters are you using?
A: Viola, March and Falsetto, whenever they are available. Basically the highest level characters, and
coincidentally they have the highest SPD stats, which is good. Viola is essential for everything before
chapter 6, her arrows deal huge damage.

Q: Do you need to level up at all?
A: No, not really. Apart from taking Polka and Frederic to level 2 for the boar fight, by fighting 2 sets
of 2 birds, all the other battles in the run are un-skippable. Bosses give you a lot of exp, so your
levels will be fine.

Q: How did you handle making money?
A: By taking 8 photos (1 turn) of the 2 maledictors forced battle and selling them in Forte with a
photographer there for ~11k each, giving me ~90k overall, which was sufficient.

Q: What is Hawk Eye?
A: A dark skill that Viola gets at level 20. It hexes an enemy so that is takes x2 damage but wears off once
you use a special attack. It's very useful for boss fights, and available from Root Lurker onwards (once
your Viola hits 20).

Q: Why are you making big detours to pick up poison whitecaps?
A: Whitecaps take 2% of the bosses hp per turn, and are essential for fast times on the first 3 bosses. As
you get further into the game, high resist rates mean that trying to poison bosses becomes optional, or
sometimes just a bad idea.

Q: What kind of items are you setting?
A: Apart from cookies and trumpets where necessary, mainly: lion's manes and sock incenses. These give +10%
attack to an ally, or -10% defence to a boss, and stack up to four times! You can't go too crazy however,
they take up a lot of inventory space and also a lot of turn time to use.

Q: What about accessories?
A: The big three are: Power Ring, Crimson Brooch and Bubbly Hat. Permanent burst is especially useful, as
hell mustards will wear after 4 turns, including counter-attacks. The bubbly hat has the added bonus of
allowing you to quick flee from some battles where you would otherwise have to wait for the enemy's turn.

Q: What were some of the harder parts of the run?
A: The Count Waltz battle was definitely the trickiest – it took several long evenings of reloading to
finally get it down. After that, probably Death Crow, or maybe Rondo, both were challenging. Also, some of
the enemy dodging is very time consuming, for example the long run to Forte in segment 10.

Q: What's up with all the random encounters in segment 16, were you having an off day?
A: Nope, running through Adagio Swamp is terrible and I spent a long time working on this segment. There is
also a scorpion who always blocks you so that you can't even flee past, so you have to wait for him to
shuffle around a bit.

Q: What were some of the bigger mistakes you made in the run?
A: Stopping to purchase Scorpion's Tails in Baroque turned out to be a waste of time as they were never used.
I had intended them for Rondo and Count Waltz, but the success rates were way too low. Also, the sheep
run-around in segment 6 (just before Viola's house) takes about 16 seconds, and there is a small chance to
run by normally if the sheep is positioned just right – but for each try you will have to redo Ogre Champ
and the paper collecting.

Q: What's quick loading?
A: If you load up a file, zone into the next area and reload the same file, it will load instantly. Not sure
if this works everywhere. The loading time doesn't go on the clock, so this is not immediately useful.
However, I am pretty certain that if you load like this, some enemies will load in different initial
positions, and you can use try this technique if your path is continually blocked in the same manner.
For example, I quick loaded at the beginning of segment 14 to get through the first few scorpions.

Special thanks to Azure, Ouro and Keyah for putting together the PS3 'Route & Changes' notes.

A number of obstacles have prevented the PS3 version of Eternal Sonata from coming together as a speedrun and beginning to be run in a manner similar to the 360 original. Initial problems included the randomized starting locations of both characters and enemies, and the inverted aiming with Viola (takes some getting used to).

More significantly, the rework to the photography prices meant that money was scarce. Ogre Champ photos seemed to be the only ones that sold well, and it was difficult to set them up consistently. Either the turn order would be off, or minor discrepancies in the positioning of the adds would cut the value of the pictures. Eventually I settled on only taking five shots with Beat’s first turn – and budgeting severely on the healing items and gear from shops. Even the present method isn’t 100% reliable for me, and from time to time I’ve had to reset in Forte after seeing the photo prices.

Another big issue was the difficulty of certain boss fights. For me, Waltz + Ruined was a real hurdle. I couldn’t separate the bosses in a consistent way, Falsetto’s combo on Waltz would hit Ruined, thus nullifying the reverse combo trick, and all the while Waltz would be burning through my healing items with his relentless and difficult to block attacks. The solution to this fight came in the form of Viola and the Lugh Lamhfhada bow. After tagging Waltz with Hawk Eye, it was often possible to take him down with two rounds of well-aimed arrows. Then I could set up the combos for Ruined in a more relaxed and efficient way, as his attacks are quite easy to block.

Having overcome these difficulties it became possible to get through complete runs. The first of these took over 5 hours; the second took around 4 hours and 30 minutes. After that the time came down gradually.


I had a lot of good luck in this PB, running a 3:58:28, with an in-game time of 3:51:01. The timing follows the New Game to Game Clear save convention. As a brief commentary, below is a review of some of the splits with the biggest time loss (as compared to best). For info about the money route, menus and so on, please see my post in the discussion forums.

A very unfortunate run through Mt. Rock, including three ambushes. The boss fight was okay; I could have got the combo off ~20 seconds earlier if my characters didn’t keep dying, but this often happens on Waltz.

The fight was good, most of the time loss was from the swamp, where I was blocked by one scorpion for ~30 seconds, by another for ~10 seconds, and I had to wait a long while for the branch scorpion to make its patrol.

There was a ~20 second encounter on the way to the boss. The fight itself was slow as the boss charged twice – the first time requiring me to reposition and heal, and the second time killing Falsetto, removing her Shadow Silhouette buff. The boar usually dies to one Willow into Thunder combo.

A very slow boss fight. Missed the first and seconds Shadow Silhouettes with Salsa due to bad positioning and the tricky hit-box. Also Viola was too close to provide the extra damage needed in this fight, meaning a few more turns at the end.

The fight seemed good to me, but was obviously a lot slower than my best split. Ideally you don't need a second combo from Falsetto and things go something like this: the boss moves forward for his first turn instead of only using ranged attacks; you set up Shadow Silhouette + Hawk Eye; Viola runs to the north-west, fires off one round of arrows for ~400k while you're building echoes; Falsetto gets off her combo; Viola fires a few more arrows for ~100k, and that's enough.

Thanks for reading.
Hope you enjoy watching the run.