Released in October 2008, Eversion is a cute little PC platformer that is all cheer and has no dark or morbid themes whatsoever. You play as a little bird dude who shifts between worlds, and you hop and bounce around on cheery forest creatures to reach the ends of stages. If you find all the gems in the game, you also get to play an additional final level and unlock true love. An HD version with a different final level was released in June 2010. 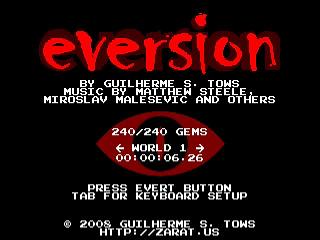 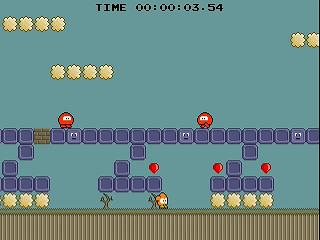 First of all I'd like to thank my girlfriend Suzy for supporting me in what I do and being a fantastic person overall.
Other people that deserve some credit are Svenne, Trdef and Guhungamanga. Not only are they great gamers, but they have grown to be great friends as well! So check 'm out ;-)

About the run..
I decided to start running Eversion because I really liked playing it. It's not the best of games, but al least it's 'interesting' enough to keep you entertained.
When watching the TAS I figured I could get a run close to it with some practice.
This ended up in getting a time that is just 9 seconds short of the TAS.

Although it's a short game, there are some interesting glitches.
I ended up using 1 particular glitch twice with some ammusing effects: just float over the level.
This is done by jumping right into the corner of a block you cannot jump under (1 high).
Easier said than done, as this trick is pixel-perfect and you need to do it twice in the run.
Part from that there's some other pixel-perfect jumping with some RNG blended in in the form of scary horizontal flying hands in stage 6.
This culminated in about 3Tb worth of footage of a 3 minute game.. Yea that's a LOT of attemps!

Anyway.. If anyone wants to improve this, be warned: The game takes SMB-style dedication to do perfectly.
And even if you do improve, it'll be by mere seconds.