While SNES owners were occupied with Super Metroid in 1994, Capcom ported SSI's dungeon crawler, Eye of the Beholder. Enlisted by the council of Waterdeep, four heroes venture into the sewers to hunt the beholder, Xanathar, and find themselves trapped with nowhere to go but deeper into the catacombs beneath the city. 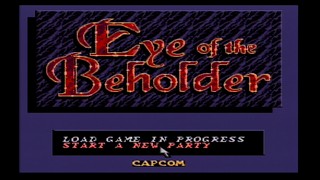 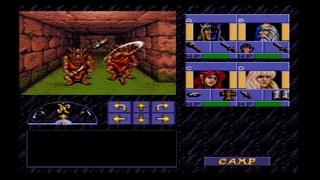 Category note: The Super Nintendo and PC versions are separate categories because of control, spell duration, and speed differences.

First off I want to give a big thank you to SDA for giving me the opportunity to do this speedrun. Also for giving me time to resubmit a better run when I requested it. So thank you! You guys are amazing at what you do! Shout outs to, Daniel Enright, for inspiring me to do this run. I've been a long time EOB player! So here's to ya!

To start things off, the controls in this game are pretty awful and the movement is sluggish for the most part. Most of the time I'm trying not to overshoot my movements when I navigating through the labyrinth so expect to see some errors. Also I would like to add that the monsters in this game are pretty random when it comes to HP. Some monsters have way too much HP than normal and will just stand there and absorb a lot of damage before dying. My main idea for this run is trying to go all the way without relying on stronger weapons. Since the good weapons are sort of out of the way during the run, I will just have to use what I've got and go for broke.

I use Control Type A since it's easier to navigate with during this run. Control Type B is meant to be played along with the Mouse.

At the start of this run I prepared my party by setting up weapons for my Rangers and learning spells for only my Cleric. Spells for Cleric I put it towards having 2 Empower & 2 Cure Light Wounds for healing (just in case). I had the Mage carry all the Daggers for easy access for later in the run. At this point I only required one more dagger drop and a one-handed weapon drop for my 2nd Ranger. Also I will need to get the Potion of Giant Strength in level 2 to use for later.

The runs through the levels should be the fastest route that I'm taking unless someone knows a faster way.

Levels 1-3 are fairly easy to navigate through. A few lesser monsters to deal with along the way but shouldn't be a problem. However the monsters can still troll you due to the monster's randomness in HP.

Entering level 4, I didn't have luck getting a weapon drop back in level 3. So I picked up Taghor for his Axe and dropping him from the party just so my 2nd Ranger can have 2 weapons at hand. I fell in the pit because it's the biggest jump through level 5 without having to use any keys for the doors. You'll end up falling in the hidden area of the Dwarf Clan in level 5. Then I head on over to the portal which takes me to level 7.

Then teleporting from level 7 to level 9...

In level 9, I sacrifice the Stone of Dagger to open up a new path leading to level 10. In the area you'll find the Wand of Fireball for the Mage to use. Also you'll run into a Rust Monster that eats anything that is metal so you have to watch out or you might lose a weapon. Afterwards I open the Inventory Screen of my Mage for easy access to my 3 daggers later in level 10.

Level 10 is the scariest level in the run because of the Mantis Warriors. They are tough to fight against and they can paralyze your party fast! Here I tried to go through the level quick before they can actually get into position and block my path. I had to grab the 2nd Potion of Giant Strength to use for later before taking my fall through the pit and into level 11.

At the start of level 11 I had to Rest and then recast Empower and having the Rangers drink the potions for Double Damage against the Xorns and the Mind Flayer in this level. Here I tried not to take too much damage from the monsters while navigating through the labyrinth of level 11. This is the critical part of the run. You don't want to rest ever or you will lose the buff for Giant Strength.

Level 12 is the final level in the game. My party still has a good amount of health going in and I still have my buffs to fight against the Stone Guardians. I was lucky enough to run into the room filled with Stone Golems and I had to face only one of them right before the door. Afterwards it was all easy for me.

Xanathar, the end boss of this game, is very easy to beat. Easy way is to lure the beholder into the trap room and then make it go into the trap and then boxing him in for the instant kill. Normally you suppose to use the Wand of Silvias to push Xanathar into the trap. Instead I use the strafing trick on him which makes any monsters wonder off on their own. In Xanathar's case, he wondered into his own death trap! Watch the beholder's blood and guts fly as he's being impaled but the spikes!

THE END! The people of Waterdeep are saved!

I hope you guys enjoy my run. Thanks for watching!

Since I've played the SNES version of Eye of the Beholder, I figure that I should try speed running on the PC version now. Obviously between the 2 versions in terms of controls, the gameplay in the PC version is faster than the SNES version with noticeable differences with some spells having different durations than the other but the overall gameplay is still appealing to some fans of AD&D. In my opinion, I favor the SNES port of the game since I feel that I can tolerate that version more than the PC version. With that said let's get down to the details.

There is a Copy Protection in this game but the version that I use allows you to bypass or "skip it" to continue game by entering any text.

In the PC version of EOB, when creating a party there is an option to manually modify the desire stats for each member that is unavailable in the SNES port. I use the modify option to my advantage to select the stats that I want.

I'll be using a familiar party and strat that I use in the SNES port. 2 Elf Rangers as main attackers, 1 Cleric for the buff spell support and 1 Mage for backing up the rangers in the fights with offensive spells and buffs. In terms of stats, I'll be modifying STR for damage, DEX for defense, CON for allowing you to have more HP to start. INT is for the Mages while WIS is for the Clerics. Increasing HP is a no brainer.

The whole run should be evident as to trying to get through each level quickly and avoiding unnecessary confrontations with some enemies. I'll be using the buff spell Prayer to help the rangers to deal plus bonus damage per attack. Also I'll picking up 2 potions of Giant strength to deal extra damage against tougher enemies and the Mage scroll of Haste to attack faster than normal.

The toughest part of this run is getting through levels 9 and onward...

Arriving in Level 10, the Mantis Level, I only have a short time to get to and through the Hive section without having to confront the Mantis Warriors. They're hard to deal with since they are one of the fastest and most deadly enemies in the game. I managed to slip by without getting held up to advance to Level 11.

In Level 11, I have to find 2 drow keys and the Stone Orb in order to go to Level 12. Here I to deal with some Xorns and Mind Frayers. Getting through the Xorn section was tough because there is a chance that they can swarm the party and they deal a lot of damage.

Finally in Level 12, I have to deal with some Stone Guardians in a room before getting to the room where Xanathar waits. In the Xanathar battle, I thought about attacking him since it's a fastest method in the PC version but by then my Haste Spell has already expired and also I had some obsolete weapons so I lured Xanathar to a trap instead. It would only be a few seconds faster if I went with the first method but at the same time I didn't want to risk the run.

And that's Eye of the Beholder I for the PC. Thank you for watching!

Special Thanks to the people of SDA and its community for the support!