Released in 1991, Eye of the Beholder 2 continues where the first game left off. Your party is happy from their victory over Xanathar when they are advised by the Archmage of Waterdeep that his scout went missing at a temple. As you get to the temple you find out that the welcoming party is really evil and your job becomes to destory evil, led by Dran Draggore. 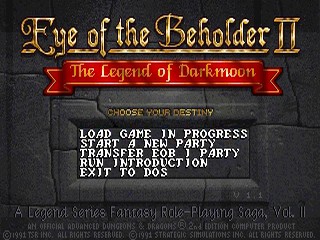 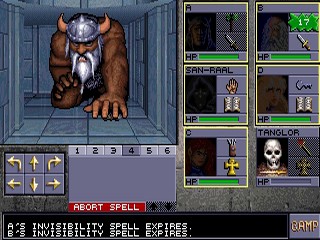 Eye of the Beholder II – The Legend of Darkmoon PC

*Special Thanks and Notes

I had to learn the game first before speedrunning because I haven't really played this game before. It took me about more than a week to play through the game and then planning out the best routes and situations to make this speedrunning more entertaining to watch since this is a pretty long. So with that said, I would like to give my shoutouts to gammadragon on SDA for giving me some tips and providing the pdf file to the cluebook which it was helpful. Also I want to give a shoutout to Doommaster1994 on YouTube for those walkthrough videos of the game. That also helped me out a lot! Lastly, I want to thank the people in SDA for being an awesome community!

This is a single segment speedrun without using any save states or using any exported characters from Eye of the Beholder I. I'll try to explain my though process as best as I can but the video should explain itself.

There are no major skips in this game besides the skip in the Wasp Level. In the game you will have to find key items in order to advance to the next level while going through some puzzles and tricky illusions. So throughout the run I will only be picking up items that I need along the way.

*Character Creation and getting started

To start off, I went with my usual setup creating 2 Elf Rangers (Main Attackers), 1 Gnome Cleric /Thief (Supporter) and 1 Elf Mage (Supporter and Backup Attacker). I went to Modify specific Stats to each of my members. STR for Damage, WIS for # of spells casted per level, DEX for Defense, CON for having maximum HP to start. Everyone starts off already at level 6/7 so some of the casters have already learned some useful spells.

Main spells I'll be casting are buffs like Prayer for the +bonus damage to hit while decreasing the chance for the enemies hit back and Haste for the faster attack rate for the Rangers. Also I'll be using offensive spells such as Lightning Bolt and Burning Hands and defensive spells like Invisibility and Wall of Force to better protect me from tough situations.

I will be resting a lot in this run so I can relearn some spells and to better prepare my party for what's to come later.

You start off in the Woods and finding the old lady in the woods is the best way to get into Darkmoon.

One of your main quests is to find the 4 Horns. During that quest you will have to find some keys to get into the next level which you will have to fight through an army of enemies just to get to it. Here I find the remains of a deceased Mage in one of the dungeons that I later resurrected using the Alter (The Alter can resurrect up to 3 members and that's it. The raise dead scrolls and other resurrection items can restore any member that is not an Elf. Most of my members in the party are Elves so picking those up is a bad choice.) I will use the portal to teleport in a room of the temple to get a copper key which it was needed for later.

*The 6 Polish Shields Quest and More

After the 4 horns are done, I will have to pick up certain items needed for the next quest. Here I will find a Fighter/Cleric sleeping in one of the rooms and will be added to the party for support. I will have to fight tough enemies like Mantis Warriors, Gas Spores and Flying Snakes along the way to find the items needed. I would have some extra keys carried over so I was able to pass through the Wasp Level without having to get through that level for a key. The items needed in the quest are 5 rocks, a potion, rotten food, a red gem, the mantis idol, a scroll of any kind and a cursed weapon (the ‘hunger' sword) to open a door to the next level where you meet the Overlord Dran Draggore. The next level you will have to get through some illusion labyrinths while fighting through Beholders and Will 'o' Wisps. You will need to find and carry a Crystal Hammer to use for later. Then touching the pedestal takes you back to the temple. You will need to use the Crystal Hammer to break a wall to get the next level.

The next quest is pretty hard to get through and you will have to find 6 polished shields (or mirrors) that are scattered around the labyrinth. There are tougher enemies like the Bulettes, Basilisks and Medusas to get through and you want to carry some Magic Dust to cure Petrified Statues because the Mages are low level to learn the spells Stone to Flesh when you get here. By then Sal Raal should be high enough to learn Wall of Force to help me keep the pressure off of those Guardian Daemons. You will also need to get a Hold Monster scroll to help you later on a quest. You should have the Eye of Talon and a Crimson Key with you because they're important for later.

After finding the 6 polish shields to open a door to the next area you will have to get through an army of Petrifying Medusas. The labyrinth is all an illusion so you can get lost very easily and can get your party trapped in tough situations. You should find the Stone Dagger so you will need to pick that up. Once through you will have to do a small tedious mission to lure a few Medusas onto 4 different pressure plates using the Hold Monster spell to keep them in place and opening a door to the next area. You will find a Hilt of Talon in the room and then getting yourself trapped by Dran Draggore.

The Frost Giants level is really tough because they can hurt your party a lot! Using the Invisibility spells will give a fighting chance to survive the fights against them. There are pits in this level so do not fall or you will have a long walk back. There is only one path out of the level and once you get through the Frost Giants you will meet the Leader of the Clan and kills himself leaving behind a 3rd piece of the Talon. Leave the area using the portal with the Stone Dagger which takes you back to the temple.

At this point you should have the Crimson Key and 3 Talon pieces to break a wall and forge a strong Talon Sword for you to use. In the Crimson Tower there a few more puzzle for you to solve and illusions to get through. There are some enemies like the Mages and Hell Hounds which you shouldn't take them lightly since they're fast and can cast spells. Once you get through all of that you will open a door to find a mage die as you arrive. He will drop a Stone Grail for you to pick up but it is not needed. In the next area you will meet Dran Draggore waiting for in a room for the final confrontation. If you can strafe faster than Dran Draggore then you will have the upper hand in the fight. The Talon Sword is needed in this fight since it does damage the most. Also Dran Draggore turns into a Dragon and it is just as fast! Kill it to win!

This was the longest game to speedrun and I tried to do it in the fastest time possible in just in sit-in. It is hard to find the time to go to a quick bathroom break or even stretch because you're stuck playing it. When I spent hours playing through the game over and over I knew I had an idea on the run time. I guess that this game can be done within 2 hours and I set myself a goal for a 1 hour 45 mins. I timed in at a 1 hour and 49 mins with change and I was okay with it. I am proud of this run and of course this run can be optimized because there is still a lot to learn about this game. One day this run will be outdated and newer strats will be discovered. That's all I got to say about this game.