Released in October 2005, F.E.A.R. tells the story of an unnamed super soldier and his completely useless teammates as they investigate strange goings-on at the office of a large defense contractor. Since it wouldn't be much of a game if all hell didn't break loose, break loose it does. F.E.A.R. combines tactical FPS action, J-horror and profuse swearing into a derivative but highly entertaining shooting experience. 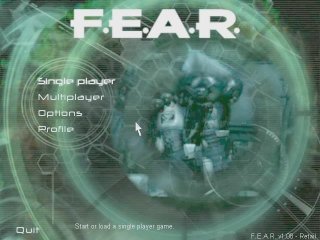 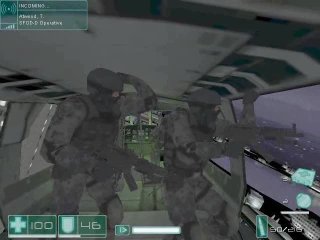 For information about glitches and the basics of running the game, visit the SDA Strategy Wiki.

This run was made in 60 segments, 22 of them being quick saves.

Once again Overfiendvip brought me back to F.E.A.R. after I saw him improving the expansion packs, and together we discovered a bunch of new things. Not much of it was applicable to the original game, but I found enough improvements to update my segmented run. Listing the new stuff here:

Ever since I watched groobo's F.E.A.R. run, it's been one of my all time favorites. At first being pretty reluctant to segmented FPS runs, his run really showed me how awesome they can be by throwing trick after trick at my face. Seriously, the amount of cool object boosts and glitches displayed is just sickening, everything executed to perfection.

After playing AvP 2010 casually and being really frustrated at how scripted it was, I dreamed myself back to the good old days when FPS games were all about shooting stuff, and F.E.A.R. quickly came into my mind. I posted on the SDA forums about possibly running the expansion pack, and Overfiendvip, a F.E.A.R. runner which I had actually seen a run from on YouTube, replied and helped me out with the basics of running the game.

Soon we were both running the expansion pack and he had found an interesting glitch called the floating glitch, but we never found any real use of it. It was always in the back of my mind though that it could possibly be used in conjunction with the ladder glitch which only works in the original F.E.A.R. and lets you get out of bounds, and to my surprise it actually did. After finding a few more glitches I decided to give a segmented run of the original game a go because of the massive improvements these new glitches would allow for.

Basically I have copied groobo's route and incorporated the new glitches wherever possible in order to skip large sections or whole levels by floating out of bounds. The first time you will notice this is in Interval 3-1. Excluding the large skip levels, I managed to improve the run by 15 seconds, which might give you a hint of how well optimized the run is by now. Most of that time comes from a new method of jumping through the ceiling in 4-2 and clipping through the vault entrance in 9-2. The things that cost me a few seconds were running out of rockets after having object boosted in Interval 11 and having to throw a frag grenade instead, as well as picking up some explosives that I never ended up using. Because I ended up redoing many of the segments there are some continuity errors in a few of the segments, but nothing that should impact the run.

Credits to groobo for the core route and Overfiendvip for finding the floating glitch and general advice.