Starting half an hour before F.E.A.R's storyline ends, you take control of Michael Becket whose life turns pretty bad real quick. Waking up post-nuclear explosion with psychic signals, he turns to battle those who attempted to make him a 'psychic commander' similar to Paxton Fettel. Oh, and Alma wants to kill him too but at the end there's a really bad twist. F.E.A.R 2: Reborn is the expansion to F.E.A.R 2: Project origin. in it the player assumes the role of Foxtrot 813 who is being guided by Paxton Fettel, who sends you to the rubble of pointmans failed attempt to contain Alma and who ultimately wants you to make your way to him so that he can ... *spoilers*, The expansion recieved average reviews from critics presumably due to its shortness and lack of scares. 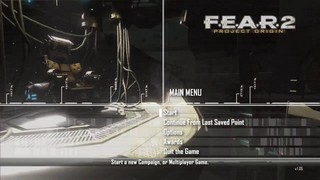 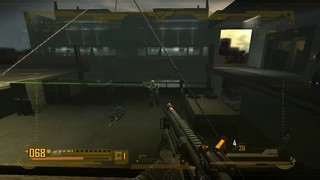 F.E.A.R. 2: Reborn is an expansion to F.E.A.R. 2. Compared to other expansions, it is extremely short and contains much more walking/sprinting and less combat than the rest of the games. Despite that, it still manages to have a few tricks that make a short game even shorter.

Weaponry - Like many F.E.A.R. games, weapons have their own weight to them, and some weapons can cause you to move slower than others. During the majority of the run (starting at Interval 03, which strips you of your weapons), a weapon will not be present, and I will be running around unarmed until the battle at the very end, where the game provides you with an assault rifle. Before Interval 03, I will be trying to move primarily with either the shotgun or pistol, which are the lightest weapons. There's not much to say in terms of how useful weapons are since they will see very little use overall during the run.

Movement - Same system as F.E.A.R. 2. The most effective method of movement is completely using up all stamina and then jumping right at the end of the sprint, rinse and repeat. Additionally, a variation of the 'crouch glitch' from the previous games exists, which allows you to run through areas you would normally have to crouch through. You can do this easily by binding crouch to scroll wheel, then moving the scroll wheel one 'unit' while next to and facing the area you want to glitch through. The only difference is (in F.E.A.R. 2 and this game compared to the previous games) you have to not be moving at all when attempting to activate it, or else it won't work properly.

Category - Easy difficulty. Easy, Normal, and Hard are the available difficulties. Higher difficulties means enemies have higher accuracy, health, and damage output. There are no other categories for this game, and higher difficulties don't really help make this a more interesting speedrun; probably the opposite actually.

Health - Same system as F.E.A.R. 2. The only areas in a speedrun where health is a legitimate concern are the elevators in Replica, the building descent in Escape, and the drop down to the pipe in Rebirth.

Replica
----------
Gradual descent to the "base." Sometimes, it is possible to get a significant horizontal boost off the canister that rolls behind you after the first elevator. I got a very tiny boost off of it, but not the one I was hoping for. It's possible to get stuck on the metallic flooring at around 00:53, so I try not to jump there. The second elevator (the first is somewhat skipped) can sometimes be delayed, which, at least from what I can tell, is determined on how the enemies in the area are killed. I try to kill them in a manner that quickly and consistently causes an early elevator. There's a few minor timesavers near the end, most notably crouch glitching through the ventilation shaft in order to sprint instead of slide kick through.

The only major (well, major for how little can be optimized and the length of the run) timesaver that there is potential for here is a way to skip the final elevator. I have fooled around with this in practice, but could only even remotely consistently do it after dying once in that location, or if the game for some reason decided to create a checkpoint save right as I was dropping down to the ground below the final elevator, which didn't seem to always work. The ground below the final elevator is covered with a kill trigger that is only removed when the final elevator button is pressed, which is basically a way to force you to use the elevator normally. There is possibly a way to skip the elevator which would save up to six seconds depending on how it was executed, but unfortunately I could not find a consistent method to doing so.

Besides that, I don't think more than a second could be saved here, and that would mainly be by simply having even better movement.

Contact
----------
Sometimes the SMG will magically equip itself once the stage is loaded. Beating Foxtrot 1017 to the glass hole saves a few seconds, and he will sometimes be pulled out of position by killing the grunts in the area, which is what occurs here - I was barely able to squeeze by in front of him. I was expecting him to force me out of the way because of how close I was to him, but luckily that didn't occur. Crouch glitching through the glass is a tiny bit faster than normal crouching. Slide kicking in front of Foxtrot 1123 and beating him to the base saves a few seconds as well. For some reason, there's a delay between when the prompt appears to activate slow motion, and when you're allowed to activate slow motion, during the hallucination. Finally, firing the rocket launcher at that part of the elevator causes it to descend much earlier than if you waited on the rocket launcher grunt to spawn and shoot it.

I think this segment is the one where I would be lucky not to lose time, rather than save any time, if I was trying to beat it myself. The only way I see to save time is to somehow kill the apparitions even faster. My killing of the first two and the last one weren't as efficient as I think they could have been.

Escape
---------
I find this to be the most difficult stage to get through. Many times, the Heavy Armors in the wooden maze will simply block your path, and there is sometimes no (quick) way to move past them. I managed to go above the one that normally ends runs, but spent about an extra second doing so. The grunts will try to do the same as well, but they played relatively nice in this run. There's also the risk of flubbing the building descent afterwards and having damage from gravity steal the run away. That's pretty much all there is to this stage - sprinting unarmed through all these things and hoping for the best.

I think a second or two could be saved here, mainly by not being hindered during the wooden maze.

Guidance
-------------
You can sometimes get a boost off the door in the beginning, and touching the moving car at all while it is in motion equates to death. This level has a lot of weapons lying around, but there's only a few I have to worry about making sure I don't accidentally get close to and pick up, as picking one up will hinder my movement.

Jumping from the pile of debris in the sewer up to the other side saves a considerable amount of time, I think it's one of the largest timesavers along with the shooting the elevator in Contact. I sort of have a setup for this where I don't have to stop moving at all. Depending on where you land on the circular object on the wall, you may start bouncing up and down, which will prevent you from jumping again until you cease moving. You can also get stuck on the side of the large object on the left as you're sprinting past it if you're too close to it, which happens to me here.

There are two Abominations that can spawn in the sewer pipe. The first one always spawns and usually never puts up a fight, but occassionally can interrupt your slide kick with a grab, and that's run over if you're attempting to achieve a time such as this. The second one, which pops up at the very end of the fight and doesn't always spawn, tends to put up more of a fight, but depending on the angle of your slide kick, you can get past him while killing him in the process. Sometimes these Abominations will initiate a grab, but be interrupted by your slide kick and die anyways.

Rebirth
----------
You can sometimes get stuck on the sides of the small set of stairs right before the door in the very beginning. It's faster to run on the railing of the stairs if you can do it without getting stuck or falling off. Descending down to the pipe isn't super precise, but you can kill yourself if you don't take it seriously.

Like the fight before in Contact, the apparitions here have set spawnpoints and spawn one by one as you kill other apparitions. They can sometimes get stuck behind certain objects and/or refuse to push in to your position. I have a decent setup for killing the first half of them, but the rest I somewhat wing, and try to use proximity grenades to my advantage, if possible.

This is where I believe the most time can be saved, depending on how accurate and efficient you are during the final battle. I think it's realistic to be able to save around three seconds here, even though I guess there's potential for way more than that to be saved if you just happen to be amazingly accurate and efficient. I imagine if it was possible to TAS this section, it could be done in half the time I spent in the run.

Thanks to Phazonelite7 who helped work with me on developing some of the strategies for this game in the series.