Released in September 2004 for Xbox and PC, Fable is a role playing game in which your every action determines your skills, appearance, and reputation. You start the game as a child and finish it as an old man. Do you choose the path of righteousness or dedicate your life to evil? In September 2005, Fable was expanded and rereleased as Fable: The Lost Chapters. The Lost Chapters features all the content found in the original Fable, as well as additional new content such as new monsters, weapons, alignment based spells, items, armor, towns, buildings, and expressions. 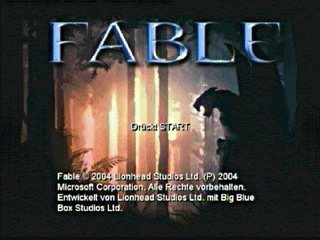 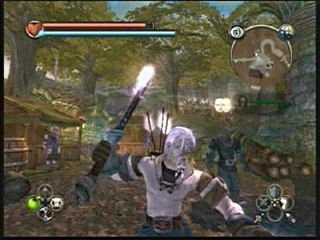 Menu Settings:
- I turn off subtitles so i can skip through conversations faster
- turning off tutorials and tooltips helps get rid of some random tutorial information (but not all) and also stops the guild master from saying 'Hero, your health is low do you have any potions, or food?'
- i change sneak to ctrl and change F3 (will potion rejuvenation) to caps so its closer to reach
- i have to turn up the brightness so fable is less dark during the playback of the recording

General Notes to Run:
- i use assassin rush and roll in tandem to move around the fastest. Sometimes this makes movement slower, because if a person is highlighted i would move towards them. Sometimes this happens when the person is off screen. Also, rushing doesn't work over bridges. So in the run if i don't use assassin rush at a certain point in time its because it would have adverse effects
- fun fact: i used assassin rush 1423 times during this run
- Whilst using assassin rush or rolling you are invulnerable. Also, (this doesn't happen in my run) but when you are in berserk you can't die from a single hit.
- the in-game timer is paused when you are in any type of menu. Be it upgrade menu, the main menu or in trader menu. I abuse this to the fullest (kind of) so i can buy/sell things so I can upgrade my sword and bow at certain times in the run. I try to do buying/selling as quickly as I could to not bore people viewing it.
- I just follow the story as normal. The following notes are things that might make you go 'why is he doing that etc'
- since I spam the esc key quickly it would appear that some cutscenes are not displayed and if this happens is the reason why the menu pops up for no reason
- some of my battle sequences are not perfect, for example I miss some hits. This is expected to happen in a run as long as this

Oakvale childhood
- i use the route i made up because i think its the fastest and there is less backtracking (take bride from cheating husband, talk to his wife, beat up bully, run over bridge and talk to father etc)
- i didn't have to avoid the guards this time too much, luckily

Guild Training
- talking to the guild master after each training session makes him 'warp' to the next one (this isn't a glitch or a trick)
- i miss the beetles a couple of times (why is swatting beetles so hard)
- i hit whisper 3 times after the second cutscene since its faster then using the bow to shoot the guild master 3 times
- i used the trick '3nki' discovered. when you have hit so many targets in the time during the archery and will training. you shoot the guild master so you go to detention but instead of spawning at sythes tower you end back up at the training area, with the time ended and you somehow passing the test.
- Maze always respawns twice when I need to hit with lightning

Wasp Queen:
- Before Obtaining Wasp Queen Quest Card I can move slightly during the autosave sequence so i can position myself next to the quest podium and click tab during the autosave (which brings up the quest menu really fast)
- the wasp queen is immortal before she spawns more wasps a second time
- i collect the health potion there so i can buy all apple pies at bowerstone south on the first go. (too lazy to pick up the pie next to the health potion)

Bowerstone South:
- i make 7K gold by buying/selling apple pies so i can buy a good bow and sword
- i buy the resurrection phial just in case i die during dragon jack
- also take a mini-detour to obtain an age of might potion

Attack Orchard Farm:
- i spammed right click so the boast menu goes away very quickly
- another detour to obtain age of skill. Stupid fishing: the first time i fish and i had to catch a 'BIG' one
- i found a trick that i discovered to make attack orchard farm quicker then protect. whilst collecting crates you burp (or other gesture) at the second bandit so he stays behind to collect a second crate after the other bandit has left the area. Next, if you're lucky, the first bandit hopefully comes back so you ask him to follow you back to the crate
- i wait for the last second to kill the guards so i get the highest combat multiplier after i defeat whisper (which was 9 this time). Then i use the two age potions.
- then afterwards i run to greatwood cullis gate to activate the guild portal there

Trader Escort
- i upgrade physique to 3, health 3 (just in case i get hit by dragon jack), rush to 2, speed 3, accuracy 3, physical shield 1, multi-strike 1 and multi-arrow 1. I was seriously 2 exp points off been able to upgrade magic power to 1.
- afterwards i arrange spells to my liking on the hotkey. i also need only 2 spells on the mouse shift hotkey so i dont accidently scroll upwards slowing me down
- it takes less time to kill the 2nd trader then it does for him to follow you again once at darkwood camp. Plus the evil points are fun to collect. Alas, you have to wait for the traders to 'follow' you once they have been healed at the darkwood camp
- i guess i didnt need to collect the rock trolls exp but i do anyway
- i sleep at barrow fields so once i return to oakvale i can buy potions there (since it would've been night). Also, it will be day when i return to bowerstone south to buy/sell potions

Find Bandit Serees:
- i take again mini-detours to obtain age of will/skill/might
- if you hit the tab key once you are locked on to a chest you warp and start openning the chest
- the bandits on abandoned road broke my shield like 5 times. First time it happened that often
- I miss headshotting the bandit guard the jail twice and have to waste a couple of secs killing him. Bribing the assassins is actually faster than killing the bandit guard (and i had enough money for it). I only thought of doing this after the run was finished:(
- hitting twinblade in the back is faster than swinging the sword

White Balverine:
- i upgrade enflame to 2 which i use against the balverines
- this was the first time this happened but i was pulling on the bow during the cutscene (must've been caused by accidently openning the menu before the cutscene)
- i need to get a combat multiplier of 19-21 against white balverine and the other balverines where i use my age of will/skill/might

The Arena:
- i upgrade enflame 3, multi-strike 2, berserk 2, physique 5, speed 5, accuracy 4, slow-time 1.
- On the second go i upgrade magic power to 5 and because im an idiot i forget to upgrade rush to 3 (I was like why do i have so much exp left over to upgrade magic power with)
- i take a shortish detour to grey house so i can obtain the age of skill/will potion there. I use this during the arena so i can always obtain speed 7 afterwards (this lets me do the prison race the fastest) and also lets me upgrade berserk 4 at a future time
- at the arena anteroom i buy/sell will potions so i can buy the master longbow and 3 augementations
- battling whisper always turns out horrible for me. however, i was able to kill whisper this time. Since, I did this i will be able to upgrade berserk to 4 in the future!!

The Rest of the Run is just doing the story as normal so here are some quick notes:
- i take the shortcut during the prison race
- when you need to find out the guard password, it's faster to make a noise so you respawn at the door so you can just walk to the book
- you can't hit the kracken when he pops his head up the second go so I just enflame him. I've found afterwards that using the bow on the kracken the second go is the fastest at killing it
- i found out the perfect position to kill Maze using the bow ontop of the lighthouse
- i found it was quite dark when i was doing try to stop jack mission so i tried to turn up the brightness a bit more and failed to do so
- after killing my sister I was able to upgrade beserk to 4. I also upgrade physique to 7 at that point
- the ice rock troll is invunerable at the lost bay for a certain period of time. i must've accidently turned off my shield which resulted in me getting hit
- the digging locations of the glyphs are random each time you do the mission. So i was lucky to get then as quickly as i did
- since i had beserk 4 I get some crazy sword headshots against the guild master guards
- my battle against dragon jack was perfect because I used assassin rush to move straight through the earthquake