Originally released in 2005 by Atari, Inc. and developed by Quantic Dream, Indigo Prophecy (also known as Fahrenheit) is a self-proclaimed interactive movie that has the player controlling several characters through what begins as a murder investigation and becomes something more. Aspyr remastered the game for PC in 2015. 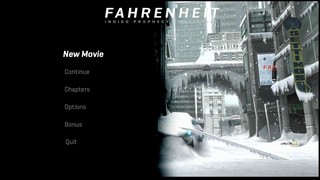 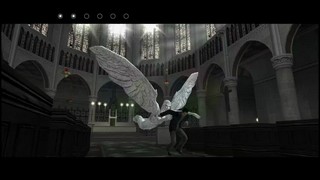 Fahrenheit (aka Indigo Prophecy in the U.S.) was described by it's developers as "the first true interactive film", and rightly so, as a majority of this game is comprised of unskippable cutscenes. Below, I will briefly describe the type of interactivity you DO have with the game and what has been done to optimize it.

Dialogue - You are able to make choices about what characters say, which ultimately only alters very minor elements of the game (as in what information you learn, as a player).
The only time dialogue choices really matters are a few sections where there is a "suspicion meter", where saying the wrong things will earn you a game over. Optimizing this game for speed means choosing the speech options that end the dialogue soonest, and take the least amount of time to play out.

PAR sequences - These are the quick time events that you must perform during action intense parts of the game, either by pushing the control sticks the corresponding direction as the color on screen or pressing L and R quickly to keep the bar in the blue. If you fail a sequence you will either lose a life or receive a game over. This is what the difficulty setting of the game effects; how many times you can miss an input before you fail the sequence. You will also start with more lives the easier the difficulty, with Easy mode giving you three. Believe me when I say no matter how many times you do these sequences the inputs will not register sometimes and that is ultimately why I ran this game on Easy. In most cases you must pass these sequences to progress but there are several instances where it is faster to fail them, which will be mentioned. Near the end of the game they start assaulting you with these sections which gives less and less to optimize, unfortunately.

Movement/Interaction - The majority of the gameplay has you maneuvering your character around with the left stick and interacting with objects with the right stick. If you hold the A button your character will run, which is faster, but also makes them harder to control. Memorizing the correct direction to press to interact with necessary objects is a large part of running this game quickly.This is the easiest area of the game to make mistakes in, largely because of the awkward camera angles and the tendency of the game to not load inputs fast enough, causing a delay.

One last thing to mention is mental health (MH), which is continuously gained and lost throughout the game. This acts as your characters life bar, and if it reaches 0 at any point you will receive a game over. Thankfully,there are only a handful of parts in this route where gaining/maintaining mental health to survive is prioritized over doing things in the fastest way possible.

To complete this chapter, all you need to do is leave the bathroom and run out the back door to the subway, but you lose too many mental health points doing this to survive later in the game. Washing yourself and paying your bill give you 10 positive mental health and saves you from needing to do more time consuming MH gaining actions later.

All you need to do to leave is find the knife and speak to the waitress. Switching to Tyler to find the knife is faster because he is standing right next to it (and his dialouge is priceless).

CHAPTER 3:THE DAY AFTER

To progress you need to answer the phone, shower, bandage your arms, get dressed and hide the bloody clothes. Picking up the key and looking in the eye-hole makes the officer show up immediately. It is faster to not hide your sheets and instead complete a PAR sequence.

You can begin running before the scene loads. Not saving the child is obviously much faster.

As Carla you need to see the email about Kirstin and then call Tyler. As Tyler you must shower, get dressed, drink coffee and talk to Sam to leave.

Failing the PAR sequences in the office is faster, as they only show premonitions. Telling Tiffany she can come over gives you mental health points, and even if you say no she will still come over to your house.

CHAPTER 7: RECONSTRUCTION
Failing all the PAR sequences is faster as they just add inner dialouge.

It's obviously unimportant to make an accurate sketch, so just picking whatever pops up is fastest.

No love for Lucas, I'm afraid. I waste a solid 5 seconds here because I sneezed during the recording and thought I had already done the input for him to close his eyes... You only need to grab Tiffany's things and tell her to leave. You also don't need to see the scary stuff in the hall, just go back to bed.

Failing the PAR sequence is faster. The first guard you pass likes to be a prick and magically see you after he's gone by, so I run a little further out to make sure that doesn't happen. All that matters is making the first cycle of trucks so you can pass through.

Choosing Tyler's option gives a slightly faster monologue. The push ups and rope climb are the fastest warm ups for each, respectively. This is the first instance of RNG in the game, as the cutscenes that play when you're fighting vary each time, and there are some that are longer than others. There is one in particular I hoped to avoid which involves time stopping as Carla cartwheels Tyler in the face, and I did.

There is little optimization here as you must find the file to progress. If you fail the breathing "minigame" you will leave and Tyler will come back and have to find the file in a later chapter, which is a huge waste of time.

All you need to do here is look at the book and find the bookmark to leave.

This is absolutely my least favorite chapter in the game. No optimization is possible aside from dialogue, you must do everything Agatha asks to progress. Apparently Lucas lacks the skills to light three candles with the same match. Also, the PAR sequence cannot be shortened and is SEVEN MINUTES LONG.

Shooting the innocent makes the timer go down quicker.

Making fun of Jeffery starts him on offense, but it is actually faster than choosing to warm up instead. Winning is also faster.

(At this point, I start to do some chapters out of order because I am used to playing them this way. It doesn't affect any thing, time wise.)

I fumble a lot with my movement here, which is disappointing. Getting dressed before switching to Tyler allows you to answer the door immediately upon switching back. Faxing the bookmark to Carla before Tommy arrives allows him to comment on it when he leaves, instead of you having to go and see him afterwards. You can wait out the second convo option with Tommy and it will skip it. Choosing to have Carla interrogate Lucas is faster.

Have you ever wanted to see literally every piece of furniture in someone's house try to kill them? Well, here you go. I intentionally lose a life at the start here as there is no time penalty and I need to get a game over in the last chapter for the ending I want.

In this chapter there are two timers you must wait out, one when Carla is approaching and one when Lucas is. As Lucas you can hide evidence from Carla, but this does not shorten the wait time. As Carla I only need to find the paper and book, again, nothing will shorten the timer. Failing all the PAR sequences is faster here.

You must preheat the oven, pour champagne, and dance with Sam. Linking the paper and book is fastest out of the acquired evidence.

CHAPTER 20 BACK TO AGATHA

Choosing to "Stay" first and then "Escape" causes the timer to appear for the police to arrive, and then disappear which shortens the following cutscene.

Nothing much to optimize here.

You must investigate all the evidence before you can leave. Looking at the toolbox first shortens the dialouge.

Dropping down from the last pipe is faster than climbing down. You can open Tiffany's window with a brick which is a few seconds shorter than opening it with your hands, but Tyler will comment on it when he investigates the house later (which takes time) making the time loss negligible. Every single time I have played through the hiding sequence I drop the exact same single input when Tyler is searching in the bedroom, no matter what difficulty I am on it, and causes me to fail and lose 10 mental health. I really can't say if this is just really bad luck or a glitch. Turning on the television also saves time waiting for Tiffany. If you simply wait around doing nothing the TV magically turns on so you can see the necessary info on Professor Kuriakin (which I think is hilarious) but it shortens the wait time significantly to just turn the tv on yourself.

Not much to optimize aside from dialogue.

Just a short dialogue and another goddamn PAR sequence.

So a second ago Lucas was back flipping 50 feet into the air and running on walls, but now he can't walk across a freaking beam without wobbling? A+ stuff right there.

Failing the PAR is faster.

CHAPTER 34: CHILD’S PLAY
Not much to optimize. I like to be very careful on the last spotlight on the telephone pole because it always seems like you can make it, and then you don't.

Failing all the PAR is faster.

CHAPTER 38: FROZEN TO THE BONE

Entering Jade's room and not taking her is fastest, as it prompts the Oracle to show up immediately.  I lost a life in an inopportune place here and wasted 15-20 seconds of my run. I did need to lose a life before the last Oracle fight so it wasn't the worst possible outcome.

Managed to really fuck up my movement here... I blame the previous scene.

To achieve the Orange Clan ending you simply have to lose to the Oracle.


Return to the Game List, the FAQ, or the Home Page.