Released October 2008 for Xbox 360, Playstation 3, and PC, Fallout 3 is a cross between a first person shooter, turn-based strategy, and a role playing game. It was released 10 years after Fallout 2 and developed by Bethesda instead of Black Isle. The game takes place in the ruins of Washingon D.C. 200 years after a nuclear war. The player takes control of the lone wanderer as he escapes the vault he grew up in and searches the wasteland for his father. 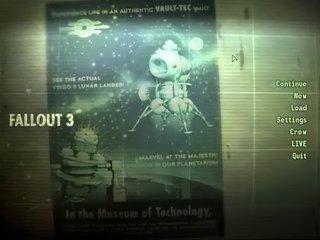 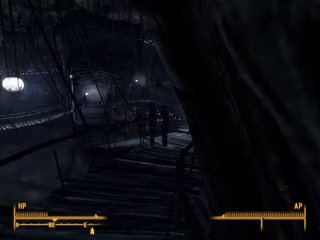 I basically just did this run because I wanted to watch it. Big thanks to Reg and the other people on the forum who planed out what a run would look like.

There is little real game play in this run but there are two major sequence breaks that skip half the game.

One is flying into the citadel first demonstrated by Radon.

It's a common bug in games that use Havoc for physics, the timing is very hard and there is no bind command like in Half-Life 2. Just jump and grab an item. It may work with any item but works best using armor or clothing.

The second was a trick at the end of the run I found to skip going to the citadel the second time.

Talking to Autumn in the Jefferson Memorial will update your quest and allow you to finish the game.

The problem is that he is in a locked chamber standing by a window.

I found that there is a clipping error in the windows facing the center of the room so that a well placed grenade can fall through them.

When you damage Autumn he will become aggressive. By leaving and coming back he will sometimes teleport outside the chamber to attack you.

At this point in the game he is a quest character and can not be killed, but knocking him out will let you talk to him when he gets up.