Released in March 2002, Fatal Frame is the first game in a Tecmo survival horror series. The plot revolves around Miku Hinasaki, a schoolgirl who decides that the best way to investigate the disappearance of several people in a haunted mansion is to do it herself, with nothing but a camera. It's a special camera, however, that can defeat ghosts by taking pictures of them. Just don't run out of ammo. 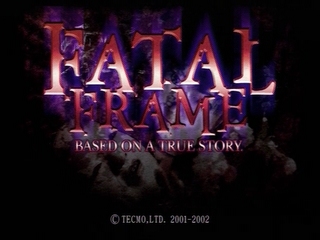 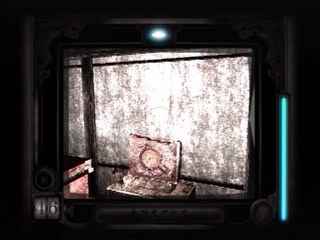 Part 01 - During the fight I lost time by not getting the fatal on the first shot. Also I was stuck on the open door. The save was long due to it being the first one.

Part 02 - The short pause was due to my family calling me but it only affects the video time not the game since it was at the title screen. As you can see I'm not going after the point ghost due to the time consumption with the photo title and such. The reason for hitting the blue flames is to get it out of the way for the rest of the chapter, they do not go away and it's a pain trying to avoid it with these camera angles. I Lost time on film pick up because she decided to look at the table instead of picking up the film. The recorder is needed for the story to progress. The rest is a fetch quest. I lost time taking the "Man Behind" picture since the fight starts in that direction and I did a horrible job on the battle because of it.

Part 03 - I splurged points on range and speed because this battle is in a tight space and he moves radically around. I had to take the doors picture in order to make the story progress, without it the ghost will not appear.

Part 04 - The reason for the two saves on file is the second one was a time saving Trial. I tried to go to the storage room then save again for safety but we decided to scrap it and do a full run to the backyard since saving took too much time. I did not pick up the scroll (to save time) since I already know the code from memory 1312. I took both door pictures at once to save time since one leads to the other. The second door code is 3669

Part 05 - The reason I used quick shots on the woman in red instead of waiting for fatal frames is because her attack is just so fast. I ended up getting gut punched instead of fatal frames. Best to just shutter bug it. The puzzle goes 3, 4, 5, and 1. I took that photo to speed him up on his decent. After the battle the camera angles gave me the bird as I tried to get my film. Running towards Kerie ends the chapter (no use trying to attack her since she's invincible and the doors locked).

Part 06 - Just a picture run so I can get a ghost and carving in one run. I saved because the next battle is very tough.

Part 07 - I once again jack up my points for Long Arms even though this is the last encounter with him. The door's code changed to 2611. I guess the ghosts got to gather and decided to change the locks for laughs. Stupid ghosts...

Part 08 - Fetch and run for the photo and carving.

Part 10+11 - This puzzle is 4 2 3 5 4 1 2. The seizure at the latter is me trying to use it. I had to run along it while pressing X. The candle puzzle is 4 2 5 4. The last child battle is a pain since he can either be on the boards above my head, running towards me, or playing on the stairs. A side notes on this battle. It has a glitch, if the child disappears you are stuck in story progression limbo since you cannot trigger the battle unless you retrace your steps.

Part 12+13 - I fought the bound man because if I try to avoiding him he hits me as I go through the door. For the doll puzzle it's the doll in the back right.

Part 14 - To save time I pick the masks up as I moved along. If you notice the sound messes up when the ghost takes damage that was in game not a recording issue.

Part 16 - I reused the reflection mask to get to the rubble room quicker through the Joy Door(TM).

Part 19 - In this segment I get caught on a lot of edges when doing the rope puzzle + the fight. Before the fight I give myself the slow ability which I use here once along with shutter shots to slow him down. A side note - The flying heads that inflict damage are killed with a normal camera shot so to protect myself I got them all at once with one shot.

Part 21 - Another priest battle. The blue flames are just like the head masters head attack so I must take pictures of them to protect myself.

Part 22 - Now for the next part I have to explain. When I went to the fish tank room I (normally) have to fight long hair women but my game even when I reloaded it dumped not only long hair women but a broken neck or the wandering monk to also battle. Needless to say to keep no damage I had to take a small detour. The detour isn't very noticeable but it's there. Afterward the door code is 1347. Due to resetting the in game room counter no extra ghosts show up to curb stomp me.

Part 24 - The shrine puzzle is basically 1234 but I did it 2341 so I could get the seals picture with it and just leave. It also makes me feel unique to be different. "Spots of something red, like blood, run along the wood hallway" Give this girl a freaking medal! I'm sorry but I think by this point in the game we can safely assume there are red spots on the ground Miku.

Part 25 - I took the longer way around to avoid a spawn of bound man. "There's a big pool of blood in the middle of the room!" This looks like a job for a Maxi Pad! But no seriously I can tell Miku, "take a Xanax and move along." If you couldn't tell I was a little trigger happy and lost my stones and by some grace of god I was able to doge his attack by nailing him and running.

Part 26 - I saved a lot of time by avoiding looking though the looking holes. One's a battle with Floating head who up till now I haven't had to fight. Go me. The second is just a cut scene.

Part 27 - I used Type-74 because it's quicker and I have little time to fight because they blend in to the dark and can attack me. After the last mid-boss I swap over to type-90 film. Because I never updated my power meter type-90 automatically gives me a full shot and that's the only way I can hurt Kerie. Normally when I am charging my shot she comes after me and when the camera's charged the room shakes messing up the focus leading to a miss. It took about five shots and little movement because I jacked my range up. Yes, I walked the wrong way for the last (I hate that grainy background) mirror piece so I wasted some time there.

I want to thank my Big brother for doing the video editing and posting work for me.