This game, known as "Faust" in Europe and "Seven Games of the Soul" in NA, is a Myst-like adventure game where you're tasked with arbitering whether seven characters have been up to no good and whether they should be condemned by investigating their lives in 360 panoramic scenes full of interactables and puzzles. It's something of a rarity coming to international markets in 2000 from Slovenia of all places from a developer then known as Arxel Tribe and later as The Arxel Guild. 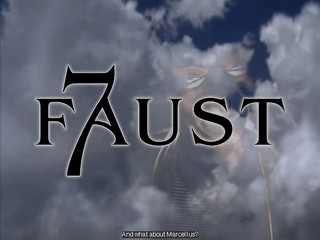 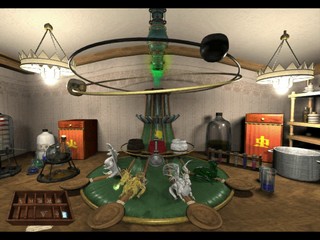 This is an “Individual Levels” run of «Faust: The Seven Games of the Soul. Game is divided into seven episodes.

This game adds acceleration to mouse pointer movement. If you are to speedrun it, be sure to set 1:1 data transfer for your mouse (for Win 7 its 6/11 mouse speed, Enhance pointer precision: off; you can check if you are skipping pixels with MouseMovementRecorder software).

In all episodes progress is tied to a certain triggers and in this game you can skip a tremendous amount of events/triggers and still progress. I will address each episode to highlight key elements of speedrun:

Oven's door opening animation doesn't cut off if you leave screen, runner can do other stuff instead of waiting for the door to open.

When you arrive on Love Island and press button in the floor you need to wait until the button animation is finished otherwise column door opening won’t trigger.

A three row cylinder puzzle can be solved by entering all three rows of numbers by yourself, but Judgy found out that if you place a map on a stand, game will set two upper rows for you.

In the second part of this episode you need to collect Alchemy Items to carry out the creation of Homunculus. You can skip a lot of them (hence the almost empty box at the end of the episode).

Lack of matches however causes game to crash when the episode is finished. Although technically episode is done, you can hear main menu music and see several menu frames.

If the first cutscene with Homunculus is skipped too fast ladder won't trigger.

In Kalinka’s house it is better to trigger pressing process of soft (black) leather first and do other stuff with hard leather while the animation process for soft leather goes on.

You can softlock the game if you try to skip fade in/out when entering a library.

I just bruteforced poker game to end it with one set. Sometimes Mr. Nitty can force you to play 2 or 3 sets.

My pattern for the underground labyrinth is going left until «26» number on the wall, and then going right.

It is faster to finish episode by clicking with a pen on the bald man rather than trying to pixel hunt the contract (you get different ending if you sign a contract).

Special thanks go to ghotik (DxWnd developer) and Judgy.