Released in October 1992, Felix the Cat is a simple platformer with the requisite grass, ice, and swimming levels. The Professor has kidnapped Felix's girlfriend Kitty and won't let her go until Felix gives up his magic bag. Of course, Felix is unwilling to give up the bag and decides to rescue Kitty from the clutches of the Professor. 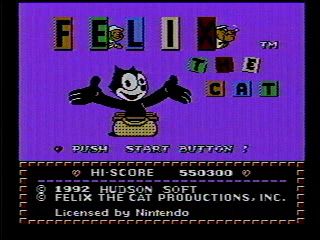 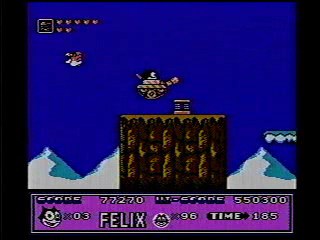 The speedrun improvement that the world has been awaiting for so long has finally arrived. For a long time, the people clamored: "Hey, vgmrsepitome, we need an improvement of Felix the Cat, and we need it now!" At first, I declined, saying, "No, I mustn't. Felix the Cat for the NES is an anathema to me, a force so powerful I dare not provoke it. Felix the Cat exists on a higher plane, and were I to attempt a speedrun, I would be overcome by the game's unfathomable magnitude, its undeniable ability to invade the mind and taint the soul. I would emerge as a delusional wisp of a man, desperately clinging to a tattered heart and a battered will."

But the clamoring of the people persuaded me. I abandoned all hope and selflessly plunged into the miasma of Felix the Cat.

Kidding aside, Felix the Cat is one of the easiest NES games to beat. But it is not as easy to speedrun as it might look. (However, Felix's effective, fun-to-use star-aura attack does make it easier.)

Stages 2-1, 3-3, and 5-2 are flying stages. I spend time collecting Felix heads in these stages because that's how I get the plane, and the plane flies faster than the hot-air balloon and faster than Felix-with-umbrella. As an example, if you use the plane to fly through stage 5-2, you can get a time of 181. But if you use the hot-air balloon or Felix-with-umbrella, you'll get a slower time of 169 (the onscreen timer starts at 250 and counts backward). Ideally, I would end stage 3-3 with the plane because then I would start stage 5-2 with the plane. But in my run, the boss in 3-3 hit me, which caused me to lose the plane. So I had to start 5-2 with the hot-air balloon.

Stage 6-1 is probably the hardest stage to speedrun. The current pushes you backward, and if Felix is positioned at a certain level on the surface of the water, he won't jump when you push the button. These two problems (combined with dodging spitting fish and maintaining enough hearts to keep the dolphin) make speedrunning this stage an awkward experience. I was a bit cautious and a little sloppy, but I was able to beat marth1's time on this stage by nine seconds.

Stage 8-1 is a bit tricky. You can't let your heart supply become exhausted; if you do, Felix's spacecraft will disappear, and Felix will die (which is fun but not advised during a speedrun). Luckily, I discovered a certain cloud that, if shot three times, disgorges a power-up that replenishes Felix's heart supply.

During the ending, Felix and Kitty are finally reunited, but Felix's efforts to rescue Kitty are all for naught because Felix snorts a little too much catnip and crashes his spacecraft into a planet, thereby killing himself and Kitty in a massive explosion. The end.

If you have questions or comments, e-mail me at egmlover AT hotmail DOT com.