Released by SunSoft in 1989, Fester's Quest is the game for you if you thought the Addams Family would've been better with copious amounts of invading aliens. While lounging in a beach chair, Uncle Fester sees a UFO land in his hometown, and obviously they're up to no good and he's the only one who can stop them. Creepy, kooky, mysterious, and spooky indeed. 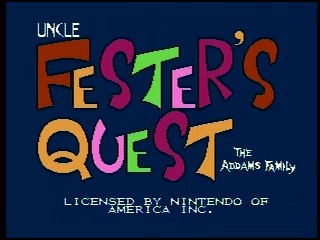 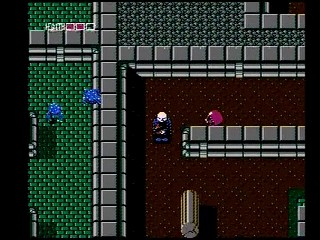 Fester's Quest. Maybe it isn't Sunsoft's best, but I enjoyed playing it when I was a kid and still do to this day. I suppose that's a good enough reason for running it, right?

Anyway, some general notes before getting on to the run:

The Key Glitch
- The fastest way to "defeat" bosses is to use a key against them. There is a location in the boss room where you can use a key to open the door to the house where Thing gives you Invisible Potions. This gives you the Invisible Potions and has the added benefit of instantly killing the boss.

Wall Hugging
- In many places hugging the right or upper walls will prevent spawns from occurring, granting a clear path for Fester.

To the First Boss
- It starts off with a nice "brisk" walk down the street and then down into the sewer until I reach the set of slimes I grind key drops off of. I need 12 keys in the run; 1 for the Grandma's house for the Nooses, 5 for boss buildings, 6 for the key glitch. The old grind involved just killing the slimes until 7 keys were picked up and in the process Fester's gun could be powered to level 7. The item drops are not random, so it will always be possible to pick up the same amount of keys and gun power-ups in that order.

However, after some further research into how the item drop orders work, I figured out a way to manipulate the drops so I could obtain keys faster. There is a set order of 16 drops for each gun level. When you pick-up a gun-up or a gun-down, your next drop always resets to the first drop of the appropriate set for the gun level you are on. If you wait to pick up either a gun-down or a gun-up, you can continue to receive drops from the same set order until you pick up the gun-down/gun-up.

This turned out to be my fastest grinding session ever and almost a perfect one, except for that I killed all the slimes before I could get the last gun-down I needed. I had to slow down a little because the level 4 gun is REALLY stupid to try and hit things with, but I lucked out and got the gun-down pretty quickly along the way and BEFORE entering the next sewer, thankfully.

I had bad luck, getting TWO face spawns in front of the stairway. Faces are nasty because they spawn 3 flies that make faster walk even SLOWER and in a speedrun you do not pick up the item that can cure the slow speed. I also had bad luck on a blue frog showing up earlier than usual in the sewer, forcing me to have to kill it, and a blue frog in front of the boss building that I had to kill. However, I picked up key 8 off of that last blue frog, so it was not all bad.

To the Second Boss
- I accidentally used an invisible potion because I was not far enough over the stairs exiting the first sewer when I hit the button. So I just went with it and used it to walk through the first enemy spawns out of the sewer.

I used the same manipulation for the first grinding, with a slight adjustment for being at gun level 4 to pick up keys 9 and 10 and then used my last invisible potion to grab the set of gun-up/gun-down with ease and walk past the mass of slimes leftover from my grinding.

Then building and key glitch.

To the Third Boss
- Very short walk to the third boss building. Everything went as planned here.

To the Fourth Boss
- I thought I could outrun the mouth after my invisible potion ran out. Nope. Took a stupid hit. It came back to bite me when I had no more invisible potions to slip past the frogs in front of the boss building. Speaking of which, that was the first time I had ever seen that many frogs there.

At least my building navigation was good and I did not mess up the key glitch.

To the Fifth Boss
- My menuing was BAD during this section. I picked up key 11 before Grandma's house and used Nooses to help with some kills early on. A menuing mishap resulted in taking an unintentional hit from a mouth. I also messed up the frog despawn at the boss building. Somehow I managed to position myself in the right place to use the last invisible potion I had left and avoid taking a fatal hit from the two blue frogs.

Fifth boss building went nicely. Navigating here is tricky because a single wrong move will decimate a good run. I kept my cool and my good muscle-memory and made it to the boss without difficulty. From there an easy glitch trigger and time to head to the UFO.

The UFO
- Almost made it through the island, but had to stop and use a Noose to kill a mouth in my way. I breathed a sigh of relief when the last key I needed dropped off a jumping eye in front of me when I killed it with a Noose. Earlier a jumping eye on the other side of a wall was killed by a Noose I needed to use and I had been worried the key might have dropped then.

At this point, I switched to the invisible potions, but the game threw me a curve. A pair of floating red eyeball aliens showed up in my path way earlier than I was expecting them. I ended up putting my invisible potions into use a bit sooner than expected. This also resulted in some indecision on my part as whether to use my last invisible potion or switch to Nooses later on. Unfortunately, I went into the menu before deciding to stick with the invisible potions.

The next floating red eyeball alien I took an intentional hit off of, but found myself not entirely confident that I would get past it to safety, so I just went ahead and used a Noose for safety. Then, unlike a previous run, I CALMLY used the Nooses as I went along, knowing as long as I managed my timing properly, I would be fine.

Then I did a dance (albeit unintentionally) before heading into the boss room because I knew that I had made it.

Conclusion
- This was a run that I was very glad about when it succeeded. The first grinding session was an amazing combination of luck and execution and the second one was pretty good too. My key management worked out exactly the way I wanted to and I did not even have to go out of my way to get the last key drop on the UFO.

That said, I would definitely like to go back and iron out the menuing mistakes, indecision, and few other minor errors I made. It will just depend on when I feel like taking on the challenge of matching or even bettering that first grind!

Thanks to the following:

Brossentia - His run inspired me to run this game and his route was the foundation upon which I built my route. As such, it could not have existed without his run, so a lot of credit to him for this run being possible.

Vandaeron - For the help in looking into how enemy spawns worked. I do not know that I ended up using much of that info for this run, but the effort was and is very much appreciated.

Karma - For the usual support and encouragement, of course. :)

And, of course, to everyone who offered encouragement, watched me stream attempts, and showed interest in this run. It is always appreciated!