Released in 2007, the 20th Anniversary Edition is the sixth port of the game, and continues the tradition of including all of the extra content from the previous remakes only to add more. Unfortunately, the difficulty follows that of Dawn of Souls, keeping the level cap at 99, ridding the world of the MP charge system, and giving Chaos 20,000 HP. 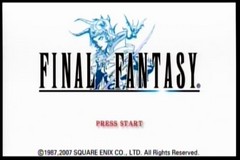 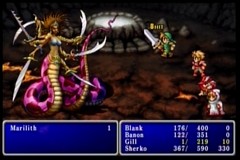 Now for things that probably need to be explained:
Class choices - I need the best output of damage, healing, and equipment. Since I'm using the equipment glitch, the gear I need is dependant on classes. Ironically enough, the best class for damage output is the bane of every other version of this game: Thief. The Thief has the best agility growth in the game, which translates to accuracy very quickly. For healing, the White Mage is obvious. The best gear, either by what's available or through glitching should also be obvious: Fighter. That leaves a utility slot open. Red Mage and Black Mage both have the same utility spells available to them. Black Mage learns them sooner than the Red Mage, but the Red Mage has more equipment options. However, since one of the utility spells I would use, Steel, doesn't work at all with one key piece of equipment, I opt to use the Red Mage for equipment and stat purposes.
Equipment glitch - Instead of copy/pasting everything, I'll just direct you here: http://kb.speeddemosarchive.com/Final_Fantasy Scroll down to the PSP section.

Setting up party:
This is a very specific setup. I need my White Mage and Fighter to be next to each other so they can glitch the Knight's Armor to the other two members, as well as each other. If I had left the party setup in the order the game gives you, I would have had to swap the White and Red Mages around while the clock is ticking before I could glitch Knight's Armor onto the Fighter or White Mage.

Cornelia:
I buy 1 Hammer to glitch into 6 Knight's Armor, 4 to equip and 2 to sell. I also buy Cure for my White Mage, 21 Antidotes and 11 Phoenix Downs. If I could guarantee myself to be more lucky, I would settle for 11 Antidotes, but 21 is a lot safer.

Shrine of Chaos:
I pick up the Leather Cap to glitch into 4 Judgment Staves. The Judgment Staff casts Flare when used as an item, which is my main spell for clearing out fodder. However, because the spell animation is slow (8 seconds per cast), I bop Garland over the head several times instead.

Pravoca:
Here is a route change implemented thanks to dn. I buy 99 Ethers here instead of in Crescent Lake, and forego picking up the Cottage in the Marsh Cave.

Ship:
The 15-tile mini game! Here I must get 2nd place, 1st and 3rd will not get me what I want. Then I need a 1-in-6 drop, or 16.666%. The drop is an Emergency Exit, which will be used in the Earth Cave. As for the game itself, it gave me some really bad number positions, and I compounded that with some sub-par play. After I finally get what I need, the game decides it wants to troll me hard, and gives me a terrible Sahagin fight.

Marsh Cave:
I was hoping for two Piscodemons, since I could've avoided using the Judgment Staff then. Oh well.

Western Keep:
Astos got an attack in, and thanks to Lag.com's strategy, bopping over the head, this battle is much faster than in any of my previous runs.

Everyone's favorite trading sequence:
Yeah, it sucks, what can I say?

Elven Castle:
I finally added the route change of exiting the castle early and re-entering to get to the treasure. I pick up the Mythril Hammer to turn into 4 Thief's Armlets. The Thief's Armlet gives +5 agility, and I put it on the empty equipment slot.

Cornelia Castle:
I derp and almost forget to get the Mythril Knife, which I turn into two Black Robes. Since I barely end up using them, I believe I can cut them from the route though. I also pick up some story-required item, I forget what it's called. Blows up stuff.

Melmond:
I buy 1 Steel Gloves to glitch into four Barbarian's Swords. Thanks to Nitrodon pointing out that the Red Mage can equip the sword naturally, so I don't need to swap the party around to get everyone equipped.

Earth Cave:
The first two floors were kinda meh, but the third floor was weird. After picking up the Star Ruby, I use the Emergency Exit.

Earth Cave:
Who says the encounter rate doesn't show up? Lich was a bit sub-par, too. Oh well.

Crescent Lake:
Here I buy 1 Mythril Axe to glitch into six Black Garbs. Sadly, because the Fighter is the only member that can wear the axe, he cannot get the agility boost the garbs give. The Black Garb gives +10 agility, which is why I put two on each character.

Ice Cave:
By the way, the run can still end here! It doesn't take much for a 9-undead ambush for a stunlock, 4 dark wizard ambush for Firaga/Scourge spam, 4 Mindflayer ambush for insta-death, or a 5 Cockatrice/4 Mummy ambush for stone/sleep spam. That said, I'll be honest, the run should have ended here.

Grinding:
I must, and let me emphasize this, MUST grind so I can survive Chaos. The fastest way to grind here is to give only the characters I need the experience. The White Mage must be level 33 so she can learn Healaga, and the Thief needs to hit 8-hit threshold. However, tests show that the Thief doesn't need to hit 8-hits here, plus he'll still gain an accuracy boost from the upcoming Survival Vests. The goal became to give him enough HP so he'll survive Chaos should my turn order get funky.

Waterfall:
I got incredibly lucky with the robot's placement, and it's the first time he was there. In every other run, I had to fight the spiked tile twice. Hopefully any improvement lets me skip the spiked tile entirely.

Onrac:
I finally buy Healaga for my White Mage.

Sunken Shrine:
I forgot about the Black Robes existing for a while, and since I used Flare twice I ended up losing about 13 seconds because of not using Blizzara as I should have. In the square-like room, I had been looking at my stream chat, and I thought I walked down far enough to get into the staircase, which is why I turned back up. Pay attention to the here and now! :( I also pick up the Light Axe to glitch into 6 Survival Vests, replacing the Black Garbs.

Melmond:
Dr. Unne is a jerk.

Mirage Tower:
The encounter rate returns with a vengeance.

Mt. Gulg:
Had three more battles than I would've liked.

Elfheim:
I finally get Haste for my Red Mage.

Temple of Chaos:
Did I just get a no-encounter top floor?
Earth floor: Encounter rate was great and then it suddenly sucked.
Fire Floor: One battle, which was nice. Thief went before being hasted, which was not nice.
Water Floor: A TERRIBLE Water Elemental fight. Thief went before being hasted, which was ARG ME SMASH.
Wind Floor: No faster way to take out the Purple Worms, methinks. Thief went before being hasted, which was FSKJSLKFJSLKFR*$#()R$#.
Chaos prep: For consistency, I remove both of the Survival Vests off the White Mage, because I need the healing to come after Chaos does his blah, not before. I've lost several runs no thanks to the agility boost. I also rearrange the party so it's Red Mage, Fighter, Thief, White Mage. The Thief is moved to the third slot so he'll take fewer hits physically, and thanks to ashe_bug bringing up a good point on damage optimization, the Red Mage takes the lead so Haste goes smoothly. It's a risky move, since the Red Mage will get targeted the most with physical attacks, but it's a risk worth taking since Chaos normally doesn't use physical attacks that much.
Chaos: A damn-near perfect pattern.

The thanks, in no particular order:
dn - For helping me to realize that you can buy Ethers in Pravoca, which lead to a great route change. It also gave me an idea of replacing the Red Mage with a Black Mage, but I was losing far too many runs before I could even sniff Garland.
Nitrodon - For helping me realize some derp with the Barbarian's Sword, and for filling me in on stats of the two pieces of equipment that came into this route change.
Elemental_breach - For giving me the drop info for the 15-tile ship game used in Dawn of Souls and the Anniversary Edition.
MetaSigma - Dude kept encouraging me to run this game. Now go finish Evermore!
Sir VG - He put speedrunning this version of the game on the map to me.
Lag.com - He pointed out a much better strategy of taking out Astos, and then I added the Defenders to speed him and possibly the Piscodemons up as well.
ashe_bug - For plenty of route tweaks and suggestions.
iMysty - For adding this game to the Itching to get Faster marathon, and thus, as a result of two practice runs, urged me to obsolete my 1:46:49.
Funkdoc, Heidrage, Sir VG, Dessyreqt, JackintheBox333, JamesTiberius, garik16, jape, Onin, zewing, Greenk4, and RaneofSotN - For a lot of support that I did not expect. Thanks a bunch.
Eternalspirit and Heidrage - For the awesome audio commentary. Shoutouts to Mayor K. on the phone call.