Released in July 2009, Final Fantasy Crystal Chronicles: My Life as a Darklord is the flipside of Square-Enix's previous tower defense title, My Life as a King. You are the eponymous Darklord, and your job is to place defenses inside your mobile tower to defeat hordes of rampaging crusaders. For a mobile tower, it gets invaded rather often. 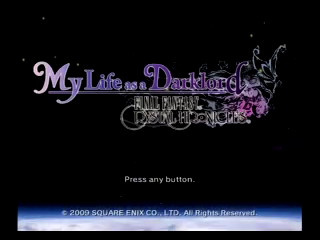 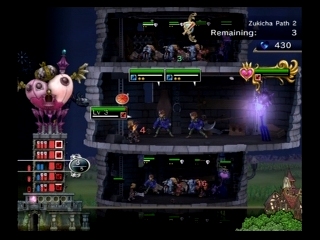 Adventurers trying to take over my tower? Prepare to be punished!

This title was a lot of fun to plan out. Since I use DLC characters in this run, the run is drastically different then if I would not have. Even the costume I wear if part of the DLC collection. For those that don't recognize it, it's modeled after Sherlotta from Final Fantasy Crystal Chronicles: Echoes of Time.

The game is, as stated before, a tower defense game. You're job is to beat all of the waves of adventurers before they reach the very top of the tower. You do this by laying out layers of various floors and monsters. What you can set out depends on how many NP (Negative Points) you have. The various monsters can be leveled up by spending Karma that you earn by beating levels throughout the game. Karma also allows you to increase the number of floors you can have built at a time.

Bosses from this game are tied into other games from the FFCC series, though most are from the direct prequel, as you fight Chime, Hugh Yurg, and Leo in Chapters 1, 4, and 5 respectively.

The game has 40 levels that are required to win the game, though the first two are tutorials and can be skipped. As you progress though the game, you earn new floors, new monsters, and new items that boost your NP. There are a lot of extra levels which can get you more karma, more items, and more monsters, but I don't need them.

For most of the run, I never need more then 5 floors. I don't even expand to allow more then that until the final level (which I expand to allow up to 10 floors). The reason is due to a character obtained via DLC - Death Knight. Death Knight is the tank of the game. It has high HP, high attack, and runs at normal speed. It does take up 2 blocks (each floor allows 0-3 blocks for monsters), so it does limit what floors I can use and what else I can lay down (if anything) besides it. Luckily it's a neutral monster type, so it's not at a disadvantage to any of the 3 main types of adventurers.

Yeah, a vast majority of the DLC was used to complete this run. And seeing how much I used further shows that using DLC is a completely different category from one that doesn't, since the strats will vary GREATLY. I mean, most of my strats here are "Death Knight wins again!" Speaking of strats, this game I felt was 70% strats, 20% on execution, and 10% on luck. This formula made the game quite fun to speed run since it was dependant on skill, not on luck.

One last thing I must point out is in regards to the last segment. Since MLAAD is a direct sequel to MLAAK, the game will pull from MLAAK's save file the name of the city and what you've named King Leo and use it in MLAAD for the final level. Normally the level is Padarak and the boss is King Leo. I felt that I just HAD to take the opportunity to start a game on MLAAK and name Leo "VG", thus I'm simply defeating the over-inflated ego that I've accumulated over the past few years, earned by the "Lord VG" name that was given to me back in the ActRaiser thread years ago. It was too funny to pass up.

Thanks to Nobelidea_prime for their Data FAQ, which helped me compile the info for you to understand what's DLC and what's not. A ton of thanks to GeneralSpoon for their Adventurer FAQ, helping me to prepare for all the levels by listing what's in them. And thanks to everybody who watched the stream. This was a long project over several months, so thanks for sticking with me!

This run is Copyright (C) 2010 Nicholas "Sir VG" Hoppe and IMAMYTH Colosseum (http://www.imamyth.com/ and http://www.youtube.com/user/SirVG) and is allowed for downloading and private viewing. Permissions for hosting this run have been granted to Radix and Speed Demos Archive. Public viewing of this run is prohibited without prior permission from the creator. The selling or distribution of this run for profit in any way, shape, or form including (but not limited to) selling on eBay and television for profit is prohibited without prior permission from the author. Video hosting sites (i.e. YouTube, etc) may host this video in part or in full, as long as full permission is granted by the author. Any violation of the above listed may result in legal action. Final Fantasy Crystal Chronicles: My Life as a Darklord is Copyright (C) 2009 Square Enix.