Released in 2008, Chocobo's Dungeon features Cid and Chocobo as they search for the Timeless Power gem in order to power their airship. Unfortunately they got sucked through a vortex to the island of Memoria and into the strange town of Lostime, whose residents lose their memory every time the Bell of Oblivion rings. The gameplay involves randomly generated dungeons, plenty of turn-based battles, and a new job system that change the appearance of the player's Chocobo and alter the dungeons layout. 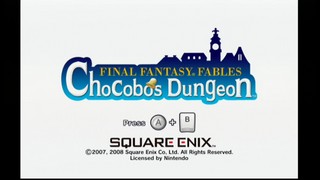 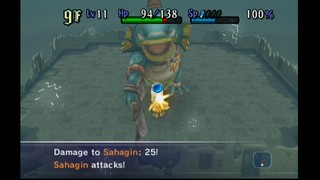 Final run time is 5:30:43, which is about a half hour improvement over last run.

I initially started trying to speed run this game using segments back in 2008. After some conversations on the forums with red_shifter, I eventually settled on White mage as the job of choice and the current route for the run has been pretty much unchanged since then. Eventually I figured out that every save / load cycle adds around 30 seconds to the game timer and that killed all of my motivation for the game. Fast forward a couple years with Poxner exhuming the forum thread and resurrecting my interest in the game. It was him and FFgamer86 that convinced me that a single segment is very doable. I recalled the thread discussing power leveling on Ifrit in the Gotf and I did some testing with it that ended up looking very promising. I experimented with the thief job to abuse Alert and I even got a semi consistent strategy for stealing it, but the huge job point requirements to get artful dodger and the lack of endgame damage made me give up on it. I resumed trying to get white mage working and managed to complete a 6 hour run using Ifrit to power level. That run was sadly not accepted and I continued to polish my route. With a lot of help from Crow! and JackintheBox333, I was able make further refinements and I got an even better time by being smarter about where to farm and optimizing the amount of money I can sell things for.

Tutorial:
Nothing much to explain here.

Mayor Gale:
I think killing more stuff here is less risky than fighting on the lower levels in Cid's dungeon and gives more chances for getting a second potion. If the turtle boss casts protect, the run is over.

Cid:
I need to make around 1000 gold and get to level 3 with at least 2 potions to consistently kill the boss.

Freja:
I bring a lot of potions into here to kill skeletons and the boss. I need to make around 2400 gold between here and Pastor Roche's dungeon.

Pastor Roche:
I try to be as fast as possible unless I need to make up for a short fall from the last dungeon.

I swap to night to get the wood saddle.

GotF:
I need to get the Dia spell by hitting job level 3 before the fight with Phoenix. This is where the run deviates from the previous attempt. Instead of power levelling on Ifrit, the dungeon is instead completed normally. To deal with being underlevelled, the wood talons are overhoned to get enough sustained damage until Dia is learned.

After beating the fire dungeon, I go right back in to sell the phoenix magicite and possibly other stuff in a mog shop for more money and to replenish ethers. A mog shop has a 50% chance of spawning on floor 11 and is always spawned on floor 15. In a worst case scenario that means getting to fight Ifrit on floor 11 a few times. The new route makes multiple trips like this to maximize the selling cost of items and to maintain a healthy supply of ethers. These trips to the fire dungeon also increase the likelihood of getting a talkie collar, some halts, and some poisons. These are all very helpful for the run. The talkie collar is needed to prevent silence from the coeurls and the poisons make the elemental midboss fight in the water dungeon much easier. Halts make the bosses between the water dungeon and light dungeon much safer.

Also the wood saddle is overhoned at this point. If I run out of money overhoning the saddle or the talons, the run is over. This makes the wooden equipment good enough to make it to floor 21 of the water dungeon and as an added bonus they do not rust, so no need to get gold equipment.

Meja:
Nothing much to explain here.

GotW:
Poisons are used to make the elemental fight on floor 20 safe. This route gets job points off minicactuar fights on floor 21 to get the Holy spell at job level 7. It is also convenient because of the need to upgrade to steel equipment to deal with couerls in Shirma 1. I was cursed and unable to upgrade, so I was going to just wait until I learned dispel instead of making the trek to the church. Thankfully, I picked up a dispel scroll so I was able to upgrade sooner rather than later. I got some ridiculous luck on the last 5 floors where the floor exits spawned in the starting room. Leviathan doesn't attack physically so Shell is all that is needed and he goes down in three casts of Holy.

Shirma 1:
This dungeon introduces what I consider to be the final boss of the game, the couerls. They are hasted and they have the ability to silence and halt you. They are the main reason for the talkie collar as you cannot really prevent them from a getting an attack off no matter how careful you are. If you are silenced, the game is pretty much over. Thankfully they are manageable at this level without needing to holy them. The boss of this dungeon has really high defense so trying to kick him is worthless. Halt would be used here and the next two bosses to make the fight even safer, but I did not manage to find any at this point. He takes three casts of Holy to take down.

More mog shopping. I got lucky and picked up sleep talons, which help a lot with fighting elementals and magic pots.

Amouri?:
I get some potions here for safety and to make the next dungeons quicker as they have quite a few undead enemies to kick them into.

Shirma 2:
I got a happy talons drop, which gives a 25% boost to experience. I got into some pretty difficult situations and gambled with warping a few times. Otherwise, this dungeon was pretty straightforward. I managed to get a halt to use on this boss, so that helped out a lot.

GotL:
This is where mog shops start selling hi ethers, which replenish 2 SP. After that point, the game becomes much safer as it becomes plausible to always have one cast of holy in reserve. I got lucky and managed to get a mog shop on floor 3 which saves time over having to re-enter the dungeon to convince the spawn to happen. The dungeon boss is pretty easy as long as you side step his charged attacks. If I have two phoenix downs at this point, I will use one of them while fighting this boss just to be safe.

More mog shopping although arguably this one may not have been entirely necessary. I also messed around with getting another set of wood talons so I didn't have to swap to daylight again in order to upgrade equipment on a forge trip during the middle of the dark dungeon, which turned out to be completely unnecessary.

GotD:
I managed to get mog shops on floors 3 and 21, which made it so I didn't have to leave the dungeon. Another big improvement over the previous run is that I discovered that the three mid bosses on floors 20, 30, and 40 can be completely skipped! After I made it to floor 41, I looked at my inventory and decided I had enough hi ethers to beat the game. Then I got some insane luck on the final ten floors with the floor exit spawning close on most of the floors. My strategy for phase 1 of the final battle is to use up most of my SP and then try to regenerate it on the square in the middle when it makes sense. I was concerned about conserving enough hi ethers for phase 2 of the battle and tried to use some scrolls, but I ended up doing not nearly enough damage with them and wasted resources instead. I think I had it in my head that scrolls would do around 40 damage from a scholar run I had done. Phase 2 of the boss also has a free SP square and the boss telegraphs all of his attacks for two turns making it really easy to prepare for them.

Credits:
The most difficult part of the run as they are easily a half hour long and unskippable!

I want to thank my beautiful wife Iris for putting up with my silly hobbies and taming our wild child long enough for me to play this game for 6 hours straight. Also thanks to all the people on the forums for their advice. Finally, thanks to the SDA team for all of the work they do. Enjoy watching the run!