Mystic Quest broke the FF series' trend in October 1992, with its down-to-earth plot and simplified game mechanics that invited a more casual gamer to try the game. The unnamed hero is guided through a series of seemingly unrelated quests, ultimately battling an ancient evil which is probably trying to take over the world. Dungeons center around the usage of different weapons which are collected throughout the game, Zelda style. 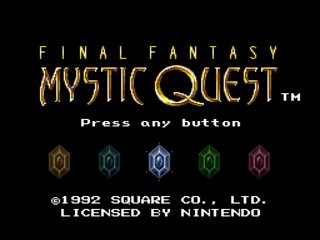 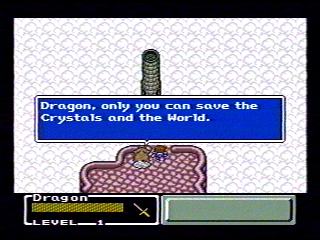 My Crystalis commentary was rather long and my fingers are getting rather tired - so I'll keep this semi-brief.

I had made a run attempt on this game back in the early summer, and my time came out to 3:30. I sent it in before my cable was turned back on (about a week before). Once I had internet access again I hit GameFAQs and realized that there a ton of things I didn't do that would have sped up my run by quite a margin. Not only that, one of the verifiers rejected the run outright from all the crap I didn't do. I asked Radix not to post it and said I'd re-do it at some point.

I now present to you my 2:39 FFMQ run. My 3:30 run was single-segment, and abused the resistance bug pretty heavily. I decided to segment this one so I could optimize as much as possible. It actually made all the difference.

I made it a point to not accept major bad luck, and this helped immensely. The only bad one I kept (since I was sick of re-doing the segment) was in Lava Dome, where a group of Ninjas decided that they would only use Lullaby for the first couple rounds.

You'll notice that I generally use Bombs if I "Attack." Bombs always have a 100% hit rate. I usually have the Claw equipped since it gives +5 Magic, and for the greater part of the run (especially the latter half) I pretty much use magic exclusively. Also, all Black and Wizard spell have a 100% hit rate. White Magic seems to share the same accuracy as your normal attacks.

Things that sucked:
-Flamerus Rex for some reason likes to dodge my Cure spells. I had to restart this segment quite a few times due to a missed Cure.
-The Centaurs in the Wintry Cave can be run-stoppers if they confuse both characters.
-The Exit Battlefield cooperated this time (first try even) but hadn't been so nice in practice runs. Sometimes I just can't get the single Squid to appear.
-Medusa is an absolute bitch without the resistance bug. Reuben's only resistance is to Fire...which Medusa doesn't use. Also, the main guy doesn't have much in the way of resistances yet. She seems to like keeping us Paralyzed/Petrified a lot...
-For some reason, in the Giant Tree, my hit rate seems to be stupidly low - I'd partially expect it for my vastly underlevelled hero, but Kaeli seemed to have the same problem...I had to repeat this segment quite a few times when they'd both gave strings of misses. No character should miss more than 3 times in a row.
-Gidrah is another bitch without the resistance bug. Fortunately Kaeli's natural resistance is to Petrification, which helped a little. Also, Gidrah will always use Para-Gas on his first turn, on whichever character will be going NEXT. I needed Kaeli to go first here else I'd be restarting.
-Dullahan also sucks hard. His attacks all hurt a ton, and his insta-death attack has about a 50% chance to hit.
-Pazuzu's Tower required a lot of luck to do well. In order to be quick, I needed Pazuzu to appear on the 6th floor. I could then just hit the switch and trap him there. I speak with him on the 3rd floor, so that eliminates the chances of him appearing there - making it a 1 in 5 chance of him on the 6th. I hated this segment...
-Doom Castle 6F is suicide without the Aegis Shield (no Paralysis or Petrification resistance). There's 10 fights and most of them suck. That is all.
-Dark King is far from easy even with the Cure cheapshot. He had a severe tendency to kill me off whenever he was exactly 1 hit from death. Also of note is that when he changes to his final form, he ALWAYS uses Golden Web the next chance he gets, which is a guaranteed petrify.

Other interesting tidbits:
-Minotaur gets 1 shotted from the Life spell.
-A lot of fights can be skipped in the bone dungeon if you jump in the right direction over the shifting sand.
-The Exit Battlefield cooperated for a change (except for 1 fight).
-Tristam is really weak the second time he joins you...
-Lamias like to cast Sleep Lure a lot.
-Skullrus Rex is petrifiable...much love for the Dragon Claw!
-Stone Golem for some reason or another can be insta-killed by the Exit Spell...
-Twinhead Wyvern is weak to every element except Fire and Earth, which it's strong against.
-Pazuzu and Zuh both seem to follow a rule of not casting/dropping Pshychicshield until after/before you cast your spells. Though Kaeli seems to be able to beat Pazuzu to the punch when he goes to drop it sometimes.

I can't think of anything else (pertinent)...enjoy!