Released in November 2003, this was the first Fire Emblem to be released in America after six Japan-only titles. You play as a tactician aiding Eliwood, Marquess Pherae's son, in a journey to find his father, who mysteriously disappeared. He later discovers something far more evil is at hand... 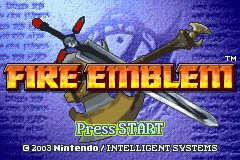 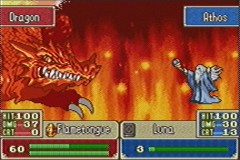 Hey. I started this run on August 13th, and didn't finish it until December 2nd. That's insane! As far as I know, this delay was my fault.

First of all, I should thank everyone who wanted to see this run and helped contribute ideas. Admitted, I don't remember many (if any) new ideas, but even having someone to discuss my ideas with was great. You guys know who I'm talking about, so thanks to you all.

But anyway, I did a lot of things differently this time around (besides going faster obviously). I even threw in some RNG abuse, which I can't remember if I did in the previous run.

As an added bonus, I never deployed Merlinus throughout the entire run. I enjoy making him look stupid. Of course, he looks that way anyway.

Enough rambling, on to the chapter summaries! I'm going to skip Lyn's mode summaries, since I hate that mode.

Chapter 11: Marcus abuse as usual. Sadly, he decided to hate me by missing Groznyi the second time...freaking moron.

Chapter 12: This chapter looks somewhat sloppy, to be quite honest. This chapter has one of the two armory visits in the run.

Chapter 14: Matthew tricked the bandit into fighting a battle he couldn't win by missing the first time. If he had hit, I'm fairly sure the bandit would've wasted time on the fort.

Chapter 17: Only 3 characters take part in this chapter (Eliwood, Marcus, and Florina). The plan is basically the same as the previous run, except this time I don't get the Speedwing and Eliwood hides in a corner.

Chapter 18: Marcus does most of the work, as usual. This chapter had a few close calls.

Chapter 19: Home of the first Luna spell, which is the only one I ever get. This chapter also has one of the stupidest looking fights ever: Marcus versus Darin. Here's how the fight goes:

If there was any part of this run that counts as comedy relief, that would be it. -_-

Chapter 20: Marcus the one man army. That's all that needs to be said.

Chapter 21: A sad excuse for a defense chapter. Isadora clears the way, Marcus kills Eubans. No Heath this time.

Chapter 22: I needed that specific RNG order, so that Canas would get a critical hit on Paul. This weakened him just enough for Pent to finish him off, ending the chapter quickly. I also stole a Guiding Ring for Canas in this chapter.

Chapter 23: Marcus killed Lloyd with ease and I skipped Wallace this time.

Chapter 24: I had four possible strategies for this chapter, and had to decide which would be the fastest. Here's a list:

I chose the fourth option, since it seems to be the best idea. Not fighting eventually costs time, and fighting too much obviously does the same. Pent and Louise rescued Eliwood and Lyn while sitting on forest squares for the avoid bonus. Marcus rescued Hector and sat on a forest square as well.

Chapter 25: Simply put, I settled on this chapter. Yes, it could've been better, but I hate this long chapter anyway. That's not to say it's complete crap, it's just not my best.

Sadly, I had Hawkeye grab a Talisman...that I never used. Athos would've been the only person to consider, but 2-4 extra magic damage won't kill him.

Other than that, the Mercenary near Legault, Ninian, and Lyn was a cheater. The RNG hated me, so I had to do some other things to avoid missing with a decent hit rate (I think).

Chapter 26: The strategy I used had one important goal: rescue Zephiel as soon as possible. After Marcus the one man army did so, I had him escape the throne room...bumping into guys along the way. Time lost there, but I did get the Boots, which made it worthwhile.

I had completed this chapter before this segment, but I decided to take a 13 second penalty for the Boots (which I skipped before). I think the "inventory full" part shocked me for a second, since it looks like I hesitated.

Chapter 27 Preparations: I think this might have been the most annoying segment of the run, and it lasted less than a minute. I had to make sure I didn't see Nergal's ugly face, since if I did, it would cost me seconds. If I managed that, I still had to be near perfect on my preparations.

Chapter 27: One of the time killing chapters...or at least, it tried to anyway. I pretty much went on a set plan throughout the entire segment, but near the end you might notice I'm on my own. It should involve my decision not to attack the enemies at the top right, see if you can spot it.

Pent getting to 19 speed (at least) was a mandatory thing, since it would allow him to double attack Linus with Thunder (and making the chapter that much faster).

I also grabbed the Warp staff, since it's an obvious requirement. Athos warping is just too much fun. It has one use in Chapter 28 as well, thanks to my new strategy.

Chapter 28: Marcus has to help my pathetic Eliwood get past Georg, so Pent warped him over there. There's a very dangerous decision near the end, when Eliwood gets released. I won't spoil it for you though.

Chapter 29: Basically a repeat of Chapter 24 when it came to possible approaches. I decided the best strategy was to remove as many of the NPCs as possible, since they suck time from you (especially with Poison Bows everywhere).

Another key thing was to kill Denning as soon as possible. His death stops all reinforcements, so killing him is beneficial for obvious reasons. I also wanted the Body Ring for Athos, so the self-defense strategies were worthless to me.

For some useless information, I think I can quote what I said when the Armor Knight shocked me with a critical hit (and a kill) on the Sniper: "Whoa! Whoa!"

Chapter 30: Three words that, before this run, should never have been in a sentence together (unless when referring to Hector Hard mode): "I love Vaida". She was the character who basically made this chapter as quick as it was.

The reason being that she went through the middle, nearly killing everything in her path. Naturally, this kept the Wyvern Knights off of me, among other things.

Before Canas' second attempt on Limstella's life, I decided to go bold and try to tip the RNG in my favor. It definitely paid off, since the next hit was a critical which left her with 5 HP.

Can you guess who landed the final blow on her? Vaida, of course.

Final Chapter: Harder than I might have made it look, considering I needed the RNG to like me during the fight with the Dragon. There were some Bolting criticals, which is fun for all. Other than that, I let Renault get berserked and Louise (of all people) kills Ursula. O_O

Enjoy the fight with the Dragon, I know I did. :)

I think it's safe to say my old time was pulverized, and that's something I can be proud of. For extra information, I got a B rank and the Battle History screen said I had a time of "2:03.33". I also took 203 turns, 2 turns higher than one of my previous completions of the Final Chapter.

If anyone wants to talk to me about this run, or Fire Emblem series runs in general, feel free to contact me through a private message (Molotov). My AOL Instant Messenger name is LameImitation, in case you want to talk to me that way.