The sixth game in the Fire Emblem series, and the first on the Game Boy Advance, Fuuin was released in Japan in March 2002. The game follows the story of Roy (whose most famous appearance is in SSBM) as the player tries to drive out the armies of Bern from Roy's home country of Lycia. In his quest, he gains support from Bern King Zephidel's sister, Guinivere, who wishes to stop her country's conflict. As the battle starts spreading throughout the world, Roy learns that Zephidel has resurrected the Dark Dragon from the Scouring, 1,000 years ago... 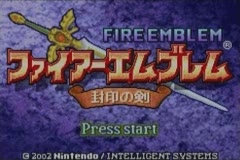 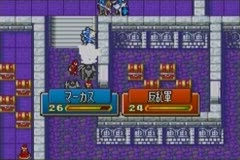 Timing note: The final save time is used instead of the time in the stats file, this is to keep timing consistent among Fire Emblem games.

Thanks given to the entire crew of SDA for making this awesome site, nate for doing everything to post every speedrun. Thanks to Molotov, Petrie911, and everyone else for both their support and assistance, Molotov in particular for many strategies used throughout the run, whether given directly, or taken from his FE speedruns, thanks. Thanks to my parents, for letting me import this game years ago, getting a DVR so I can record, and everything else they've done. Finally, my friend Andy for letting me use his Game Boy Player for months.

Ah, Fire Emblem: Fuuin no Tsurugi. First off, the Fire Emblem known in the US is the prequel to this game. Secondly, because this is Japanese, the only reason I know the plot is through game translations, and the best is by Firelizard on GameFAQs. This is why I'm not including the ending, because only someone fluent in Nihongo could read it. If you truly want to read the plot, ending, and all things that occur in-game, read Firelizard's translation. One of the major differences from other runs of this game, is that I do not use the 'Jeigan' characters. In this game, they are Marcus and Zealot. The reasons I don't use them as the run progresses, is that they are terrible units. Having low stats, pathetic growths, and are completely out-classed, I use Alan, Dieck, Rei, and Percival. Another feature of this game is every map is a Seize map. The few things I do in-game that may be mishaps or problems usually come from using the B-button to move around the map quickly, and that is EXTREMELY hard to perfect. To avoid this, usually I use the L-button, but because that can burn RN's when I don't want to, sometimes I have to avoid using it. One technique employed frequently in this run, is the RN-burn. Because everything in this game is determined by a random number generator, everything is determined from numbers ranging 1 to 100. These are separated into Low and High RN's, each being 1-50, and 51-100. So, for optimum fights, I get low RN's compared to enemy high RN's. There are two more things noticeable. One, chapter 12, I stall for turns. This is to avoid the Gaiden chapter, 12x. The other is when I send Sophia to her grave, to avoid chapter 14x. If I hadn't, I'd have to turn abuse on chapter 14, and that is a heck of a lot harder than on chapter 12. Finally, during route splits, I go the A route for chapters 10 and 11, and the B route chapters 17 to 20x. The reasons are because they are both faster, easier, and more fun. Enough of this, onto the run itself!

I will be the last to say this is the best run possible. I know that there could be better routes through this game, I made many cursor mistakes, and some while burning RN's. If this route was perfectly optimized, then this run would be anywhere from one to three minutes faster.

Let me say one thing more: This is not the entire game. I got the worst ending possible, which is by not going to all the Gaiden chapters, letting one or more of the Holy Weapons break, and letting Fa's dragonstone break. If you do this, there will be 3 more chapters. I will say this though-Zephidel is harder than the final boss. ;)

As for totals for how many levels gained...

Well, that's my first speedrun. Will I do another one? Possibly...Star Wars games are appealing to me. I just hope that more people will enjoy the Fire Emblem series, and possibly try to best this, or even try for all characters, all maps, and best ending. Thank you, the viewer, for both watching this run and for reading my comments/rambling.