Released in May 2005, this was the second Fire Emblem game to hit the US, and it was completely unrelated to the first. You take on the roles of Prince Ephraim and Princess Eirika, heirs to the throne of Renais, one of 6 nations housing the 5 Sacred Stones of legend. After 800 years of peace, rumors of an evil entity from the past known as the Demon King are beginning to spread. It is the heirs' job to discover the source of the darkness and put an end to it before the continent of Magvel is overcome. 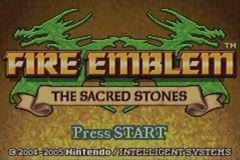 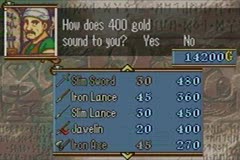 First of all, I'd like to thank YoungLink, Maur, yoshmaster5, and LinkTheValiant for their support. I'd also like to thank Mike Uyama for his help in getting this run posted. Last, but not least, I'd like to thank Nate for compressing the files, uploading them, and everything else he does for SDA.

This run was started on April 30th and completed on August 7th. Apparently, I'm good at making runs take a long time in production...usually due to laziness. As you know, I played through Eirika's route, which isn't something I would normally do (Ephraim > Eirika). I've also stated in the past that my Ephraim run was complete crap, so here's the proof.

Now, I should mention that I relied on an emulator as my planning tool. Without it, the run would have suffered greatly and you wouldn't see as many Eirika warzone drops near the end. The reason is because (to me anyway) the RNG seems to be set in stone. I took advantage of doing the same things in both runs and getting the same results.

Enough rambling and run bashing, get on with it!

Overall, I'm very pleased with this run. Someday a new Ephraim run might come, but I'd be willing to bet I won't do it for quite some time. Feel free to send me a message on the SDA forum (Molotov, of course) if you want.