Released in January 2015, First Person Lover is one of the strangest games you'll ever come across. You play as a secret agent, who must clear out a city that's been overrun with hate. In order to clense the hate, you must use the power of kiss guns, teddy bear grenades, and bubble guns to spread love (yup). Oh, and by the way, this game is actually just an advertisment for Swedish clothing brand Bjorn Borg (not the tennis player). Players can customize their character with real Bjorn Borg clothes, and can even order the clothes online through the game. Also, the final boss is amazing, and makes fun of a specific world leader... 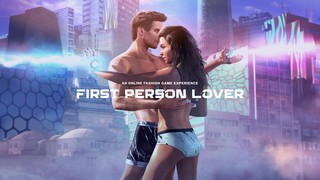 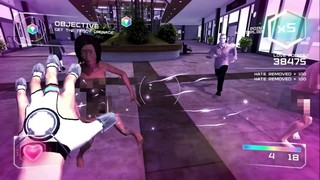 This run has been done on the downloadable version of the game that is available on their website. It is also the current World Record for this game since February 5th 2015.

First Person Lover was created to not only spoof the upcoming game "Hatred" but was also made as form of publicity for the Björn Borg line of clothing.

The time starts when the start button is release and stops when the final boss is defeated. I want to point out that the game does not keep track of the weapons' ammunitions correctly. They change when the level is loading.

Here you can select different clothes to improve your character's stats. I have tried several combinations and the "Speed +1" x 3 was the best I could found.

Nothing special here. Simply do this part as fast as possible. To pass the first fence, you need to crouch in the hole. If you crouch for too long while dropping, you might get a massive "bopping" animation while running for the rest of the game. This bug highly affects accuracy if you are unfortunate enough to have it.

In this section, you need to liberate 3 persons to shut down the harvester.

This is where you get the other weapons in the game. The flower shotgun is, to me, the best weapon to use for running this game. People become available to liberate faster with it.

The first harvester requires 3 persons liberated to shut it down. The second needs an additional one. The second harvester is luck based when you shutting it down. It is probably the longest one too. When you start shutting it down, enemies will spawn behind you. Moving left and right slightly increase the chance of shutting it down without "dying" and lose time by clicking your way back to life.

This part also contains 2 harvesters. The first one requires 4 liberations. I usually liberate the first 2 at the entrance and another 2 after picking the teddy grenade. The second harvester on the second floor and requires an additional 2 persons to liberate. I forgot to reload the shotgun but quickly switched to the love crossbow save a maximum of time.

At the end, I use the teddy grenade to stun the most people as possible to give me the best chance to open the mall doors.

This part is the waiting game. You have to call the elevator to get to the next section. The elevator will not be there until 30 seconds (Floors) has passed. Enemies' spawns when you call the elevator and a second wave comes after 15 seconds. So I pass time by liberating some people. Towards the end, I purposely died which make all the enemies ignore you even when you respawn as long as you don't get spotted by them.

The final harvester requires 5 liberations to be able to shut it down. The first three was the perfect situation. The other 2 went very well. There are usually 5 people close to the elevator. The strat used there was perfect.

The strat here was to get to the closest vent to remove his shield with the teddy grenade. The flower shotgun did well for the first round but I changed to the love crossbow. It is slightly weaker but way more precise. The boss drops ammo when you break his barrier. Once you damage him enough his shield pops back. You can collect the ammunition while the teddy grenade is recharging. The teddy grenade reloads shortly after picking up the ammunition. Just had to find to closest vent and repeat until he is defeated.