The Flintstones: The Rescue of Dino & Hoppy is a 1991 NES platformer in which Fred has to collect parts of the time machine his alien friend Gazoo (who is only visible to Fred) has lost in order to travel to the 30th century to rescue the two pet dinosaurs stolen by Dr. Butler. This game proves once and for all that drug abuse is as old as mankind. 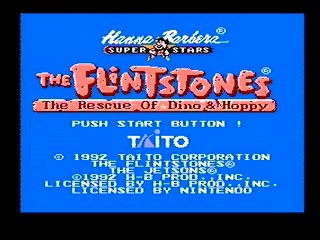 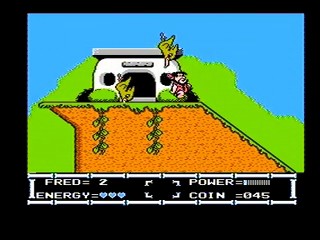 Level 1:
Standing on a certain pixel during the boss fight means You won't get hit by the boss or the fire it breathes on you.
I missed the pixel on the first pass but got it on the second. Time lost by missing the pixel was about 5sec.

Level 2:
Timing the jumps for the gunmen is really hard because their shooting pattern is different every time, and it starts offscreen.
I kinda lucked out on the first gunman, grabbed the roof by chance and it helped me get past without getting hit by the bullet.
After the sidecrolling boatride you come to a giant skeleton of a dinosaur, if you get a pixel perfect jump here,
you can skip the first rib and climb up from the second. It is also possible to get a quick-kill on the boss by getting in a full powered swing,
one quick swing and two full powered swings, but my powerbar didn't fill up quickly enough to get that third hit to be full powered.
Time lost for not getting the quick-kill about 2,5sec

Level 3:
The ice mechanics on this level make some jumps and swings really hard. Timing your jump on the first baseballer is even harder than the gunmen,
for you have to shoot him with your slingshot just after passing the barrel, otherwise you end up shooting the barrel, not the baseballer.
I missed the timing just by an inch and hit the baseballer. Lost 2sec because of the hit.

Level 4:
The boss in this level is invulnerable during the earthquake, so you have to swing at him just as the earthquake stops, otherwise he throws ticks at you.

Basketball:
A waste of time. There is no way to skip this stage. You don't have to win the match to proceed, and scoring here means you have to wait 5sec to start the play again.

Level 5:
Just before the third skeleton starts chasing me, I try to pull the egg trick that's done on adelikat's TAS video, but fail at it, so I patch the mistake up by killing the skeleton with a Tomahawk.

Level 7:
I try to jump over the bosses fireball a bit too late and lose my composure. I get hit two time after that mistake, so the time lost on this bossfight was about 7sec.

Level 8:
I get hit once by the final bosses beam, lost about 1,5sec for that.