Ganbare Natsuki-san is a 2006 puzzle platformer by Alpha Secret Base that borrows a few elements from the obscure PSX game, Umihara Kawase Shun. The rope has been replaced with a metal gadget able to extend and grab onto walls and ceilings. 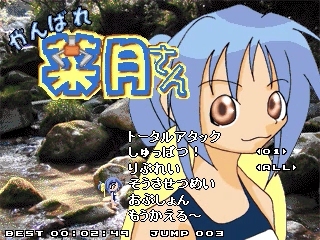 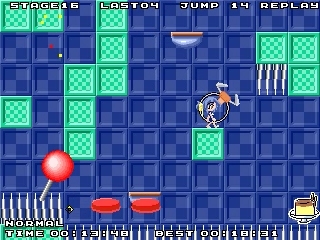 Game replays are available in a .zip file

If you're reading these comments, this run has found its way onto SDA and a project started by Enhasa in late 2009 has come to fruition.

The run began during Enhasa's SSS (Speed, Score, Survival) tourney on SDA. The 'speed' round of the tourney involved people trying to complete levels of Ganbare Natsuki-san as quickly as possible, and the plan was that at the end the best times achieved on each level would be compiled into an Individual Levels run and submitted to SDA. It didn't quite work out like that in the end because work continued on the run long after the end of the tourney and most of the tourney times have since been beaten, but the tourney was the seed from which this run grew.

Running this game presents considerable challenges in terms of both execution and planning. The execution challenge primarily comes from the frequent need for extremely precise split-second timing, for two reasons: firstly, whenever you connect the grapple to something, you instantly stop moving and don't start rotating around the grapple until you press or release a direction key, which means frame-perfect timing after every grapple is needed to fully optimise the time. Secondly, you can only hold the aim of your grapple in any of the eight compass directions, but sometimes in a run you'll need to grapple something at an angle halfway between them. This requires you to fire the grapple and rotate it at just the right moment so that it will connect to the block while travelling between two compass directions, which needs perfect timing (or a lot of luck).

The planning challenge comes from the lack of an obvious overall route through many of the levels (since you can collect the items in any order) and the variety of movement methods available. Rotating around the grapple at full extension provides significantly faster movement than running, but requires enough space to do so. You can travel up walls at high speed by grapple-jump spamming, but falling takes longer and when falling you take time to accelerate under gravity. Decisions about where and how to 'grapple walk' may be influenced by needing to be at a particular spot in the air later on to grab an item. Various possible tricks complicate the matter further and the end result is that figuring out the optimal approach to a level is a significant challenge.

The result of these two difficulties was a strong competitive yet collaborative environment as is seen so often on SDA; it was fairly common for someone to find a route improvement and post a replay of a faster time, only to have someone else optimise the route further and shave a few frames. Even small, seemingly simple levels turned out to have surprising tweaks possible. As time went on, the play style of the runners evolved and was refined, with the standard method of movement shifting to rapid 'grapple-walking' wherever possible, even for short distances, and routes involving many more individual grapples in even shorter spaces of time became regarded as possible and then executed. Even the first few levels now feature rapid grappling in multiple directions. Before long, the times were getting close to human limits and most improvements were by single-digit numbers of frames - and even those improvements were hard-earned, impressive feats.

There are a bunch of minor tricks and glitches used in the runs. We'll try to explain most of them, in the order they appear through the run.

Firstly, on level 6, you see Dante deliberately suicide on the spikes just before the end. Dying stops the timer immediately and removes your ability to travel horizontally, but you keep your vertical momentum and keep travelling vertically as normal. During this time you can still collect the final item of a level and win. Therefore a few frames can often be saved by suiciding early to stop the timer. You'll see plenty of this in the run.

Secondly, at the start of level 9, a peculiarity of the game's collision resolution behaviour (which normally expels you from walls in the direction perpendicular to the wall) means that rotating into a corner in the right spot warps you forwards, saving a few frames.

Thirdly, on level 16, between 7 and 10 seconds, ExplodingCabbage takes advantage of another minor physics peculiarity, which is that if you remain a small distance directly above a block for a fifth of a second or so, you the game 'snaps' you down onto the block. This is used as a way of cancelling upward momentum in order to fall sooner, although it was later obsoleted in most situations by the (more difficult) technique of using a quick grapple to cancel momentum instead (which you'll see a lot of), and you now only see the block-snapping used in this way on level 16.

Finally, on level 49, Dante exploits some more weirdness of the game's collision resolution / block snapping mechanics to glitch straight through a wall. This can be done by rotating the extended grapple through a wall, then quickly releasing and re-extending to grab onto a moving target on the other side of the wall, as you see in the run.

Besides these exploits, there are of course a wide variety of grappling and movement techniques used in the runs, but this should give you enough information to figure out what's going on and why for yourself.

We'd like to thank Enhasa, for organising the tourney and having the idea behind this run, as well as everybody who did runs for the tourney - everyone who provided competition drove the standards of the resulting run up, even if none of their runs were left standing at the end.

And of course, thanks to all the SDA staff for all the work you guys do.