A squad of up to four can be sent into the demi-procedural dungeons of Gauntlet 2014. Inside they will oppose evil in various wraithlike, ghoulish, and goblinoid guises making the most of their class abilities. The wizards in particular have a DIY kit for homespun spells taken from Arrowhead Studios' existing Magicka titles. 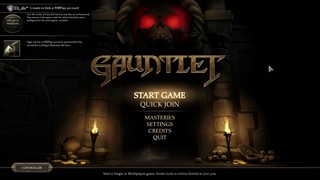 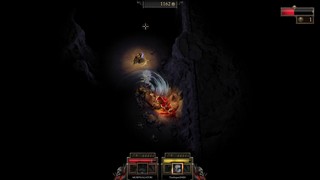 So this game started as a much more serious project that we wanted to do a 4 player run of, and turned into something stupid after PJ and Mecha Richter managed to spawn out of bounds (OoB) during our casual playthroughs. After a bunch of experimentation, we figured out that while the walls are pretty solid when you are alive, the netcode allows you to respawn out of them without too much difficulty. We also had to spend a really dumb number of hours grinding masteries to the maximum level to optimize our characters for attempts.

After all our experimentation and routing, PJ and I determined that Warrior and Wizard would be the fastest combination of characters to complete the game. Warrior, played by MURPHAGATOR!, is used because his slam dunk attack is an extremely reliable way to get OoB, and has the most potential to get large distances through walls. Wizard, played by PJ, is used since he has the best movement tools to make a couple specific OoB movements possible. This is fantastic, because Warrior is the undisputed worst character in standard play, and the undisputed strongest character, the Valkyrie, is not used. Adding more characters would just force us to spend additional time dying to setup OoBs (especially since Elf and Valkyrie have very strong protection from deaths), and wouldn’t add anything to the stages themselves. The only place we’d gain much is the final boss, which we have probably the least optimal team for.

Finally, after all our routing was finished and we had spent way too long routing, the game was patched in a way that made getting OoB really unreliable for no good reason. Four months or so later, we figured out how to get around that and play on version 1.02. This turned out to be a blessing in disguise since we had been so burned out on the game because of the mastery grind. We use NG+ since resetting masteries for each playthrough would be a pain, and we play on Unfair to embarrass the game as much as is possible. Being on unfair means that we only get 1 chance to do each OoB, though, and requires us to spend some time killing things to earn resurrection coins on one occasion.

There are 3 worlds, each with 3 regular stages and a boss stage. Every regular stage is broken up into 3 separate sub-stages. I denote this as the world name, followed by two numbers for clarity. So for example, the very first stage is Crypts 1-1, followed by Crypts 1-2, Crypts 1-3, then Crypts 2-1, ect. The x x-1 stages are pre-set and tend to revolve around puzzles or planned routes. We do not complete a single one of these types of stages as intended. The x x-2 sub-stages are a pseudo-randomly generated stage, which I will give details on for each world. The x x-3 sub-stage is an arena style stage, of which we complete exactly 1. Finally, 2 of the bosses are completely skipped. So onto each worlds details.

The intro to the game, with zombies and skeletons for foes. Zombies are non-threatening and have next to no health, and skeletons die instantly if they are knocked down. This world has the distinction of being the only one where the x-2 stages have solid walls that we can walk on. As a result, we get to ignore all of the obstacles that would normally have to be completed.

Overall, our Crypts were fairly sloppy since this particular run had more been intended as practice and just happened to go really well.

1-1: Walk straight towards the exit, OoB through railing, and exit. I was screwing around and missed the spin.

2-1: One of the more creative solutions we found, Warrior has to hold the screen so he can return to the entrance to perform the OoB. Wizard picks up a potion, and uses it on the speed boots so that he can firedash over a gap past the door. Since there are no walls on either side of this map, this is a skip that only the Wizard can do.

2-3: The only arena stage we complete as intended, entirely because they put 2 doors up for the exit. We tried for several hours to find a way to trigger the door from the areas above it, but were unsuccessful.

3-1: Another stage where Warrior has to hold back, this time to prevent a gate from closing and preventing Warrior from returning to the exit for the OoB.

3-3: This is a really tough arena to do correctly because the spawner is in a position that it’s tough for Warrior to avoid ramming into. Wizard casting slow aura before dying helps, but this does not always go smoothly.

Boss: Fortunately, the door itself is not locked. Poor fella didn’t have a chance to show his stuff.

This is where a few of the more creative routes had to be determined. The ceiling here is not solid, which means we have to play the x-2 stages completely, and the x-1 stages are more strict about where and how we OoB. Enemies here are grunts, who are numerous but weak, and orcs who are really tough to kill quickly. Theres also spiders, but they don’t amount to much. Fortunately, we don’t have to fight many of either.

1-1: This skip is the one that took us by far the longest to figure out. While it looks like there is a huge open gap that the Wizard could have gone over, there is a super thick invisible wall almost all the way across. Any further in the stage and we would not be able to skip to past all the fights, and again there are walls for no obvious reason. By getting the Wizard to the EXACT position we did, and doing a fairly specific firedash, we managed to squeeze past all the triggers.

2-1: The only stage where we need to OoB twice. We had done all of our routing on normal since it gave us multiple opportunities to attempt OoBs until we found setups that worked, so this stage was a bit of an eye-opener when we returned to it on unfair. Wizard grabs a potion at the start, and then we complete the first two fights in the area. This nets us our second coin (we start with 1). Wizard then dies and does a potion firedash over a gap to skip a good 4th of the stage. Warrior respawns and helps the Wizard through the next fight, earning the 3rd coin for the stage which is used to OoB over a cliff, skipping the other 2/3rds of the stage or so.

2-3: One of the most difficult arenas because orcs are super tough and the giant spider blocks the exit really well. This time, the spider just decided to hang out and watch the Warrior run on by.

3-1: One fight then go straight through the exit door. One of the most time-saving skips in the game.

Boss: Like the first, we just pass through the gate and ignore him.

The enemies here are cultists and demons, both of whom are pretty tough. Like Caves, being OoB generally does not let you have floors, so careful planning is needed. The x-2 stages here require a lot of coordination since we can often skip what are intended to be forced fights by making sure that at least one of the players is outside of the boundaries of the fight. If it cannot trap all the players in the fight, it will not attempt to trap any. The x-3 stages are all pretty tough since the enemies are very aggressive and tend to spawn near the exits.

1-1: The only OoB that we do that does not require the Wizard dying. By firedashing over the stairs at a good angle, Wizard flies over the wall. There are a lot of places out of bounds where there is no floor, and so navigation is tricky since one wrong step results in falling into the void and becoming so dead that the game won’t let you respawn.

2-1: This is the closest we come to playing an x-1 stage as intended. The Wizard’s barrier does wonders here in keeping enemies at bay while he turns the cranks for bridges. The Warrior...does his best not to fall behind. Warrior’s only movement tool, the charge, does not actually have a net gain in speed because of the startup and recovery of it. Once we reach the wall near the exit, we do the usual and go through the wall to victory, skipping about half the stage.

3-1: The single largest skip in the game, the bridge that leads to the exit is actually already placed but invisible and blocked by an invisible wall. So we do the most obvious thing and go straight through the invisible wall to victory.

Boss: This boss is the single worst part of running this game. He is completely cycle-based, and takes a fixed amount of damage per cycle. We don’t even get any potions to work with here, which would have been very nice to at least make it a bit less tedious. Because of our team composition, it’s tough to damage the boss efficiently, but such is the cost of being able to OoB through the entire game. I’d also like to point out that this boss takes longer than the entire first world, and on the order as long as all the non-boss stages in the other two worlds.