Released in 1992, Gemfire is a Koei grand strategy game for the SNES. Players are dropped in as one of many families on a large map, and players are tasked with conquering the entire territory and uniting the families under their imperialist banner. Everyone loves a good War of the Roses. 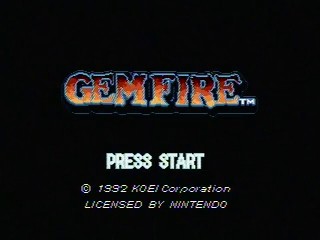 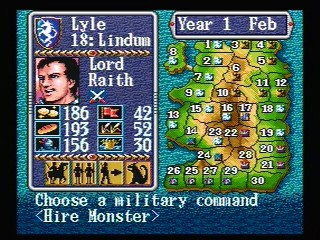 Note: The video contains several small video skips that accumulate up to a total of 17 seconds over the run. As the skips are small and do not obscure any gameplay, the accumulated lost seconds were simply added to the time.

Hello fellow gamers, I decided upon running a classic game that was a pioneer of the strategy genre, Gemfire, for your Super Nes. You'll note it's not "Super" Gemfire but is a shot for shot remake of the Nes game Gemfire, with a nicer color scheme and better sound. Back in the days when video game rentals where popular, I played the hell out of this one. It's not the hardest game in the world but does require some knowledge of the Gemfire system, which I will go over later, and some luck manipulation.

The game has one and only one map comprised of 30 territories. (I'm going to be typing the word territories a lot). Amidst those territories reside seven or eight different families who are all competing to take control of the entire map. Different scenarios have different stories that involve different families. Not every family plays in each scenario and there are four different scenarios. The scenario I have chosen is scenario 4 – Gemfire. Once you have chosen a scenario you have the option to select one family which has at least one territory on the map and must try to win the game.

It should be clear how some families possess fewer territories in the early game. Naturally, it will be more of a challenge to win the game with those forces. This is the reason I choose the Gemfire scenario and also the reason I choose the Lyle Family. The Gemfire scenario offers the most territories in the beginning to the Lyle Family than any other scenario which also means my opponents carry less weight and have fewer territories to overtake. The Lyle family (blue and white flag) has six opening territories, only to be outdone by the Blanche family (brown flag) who has seven. I choose the Lyle family simply because of their proximity to the unoccupied territories 15 and 16.

The main goal in the game is to attack your opponent and gain every last territory under your control. There are several ways to gain a territory which we will go over as it happens. The game is broken down into months. Every territory has a turn each month. Territories acquired by battle in a month where they have already acted do not get to go again. For this reason, it's important to attack early and often. Attacking a territory that hasn't acted will provide more turns in a month and benefit exponentially. The order of territories is random and cannot be predicted unless you have the ability to save and watch a particular month play out. If you save and reload the turn order will be the same but for a single segment this is impossible.

For the first month, I need to acquire the empty plots of land at 15 and 16 and get the leader of 19, Pender, to defect. Defection is a command that rarely works but instantly switches control of an opponent's territory to me. From what I have seen it only works on 19 and 18. It is pointless to try too often because a turn will be better used to fight or ask an opponent to surrender. Taking 19 is critical to do early in the first month in order to perform a clever little tactic, if possible.

I call it leap frogging and it serves two purposes. Take a look at territory 16, for example. I am not adjacent to it and can only move troops to adjacent territories. If I move to an empty territory I will take control. The trick is to attack an opponent and when I have the option to retreat to any adjacent territory, I will then retreat to 16. This works great when I attack 10 from 9 or 7. The other great thing is that when I attack with a substantial army it forces the computer to use his wizards. Wizards are a type of "Fifth Unit" that possess great strength and can only be used once every three months. Once they even enter a battle, no matter what happens, they are used up. By moving into battle and retreating on the first turn I erase their wizards from play. I only need to attack with a small force to do this. I try to do this twice to the Blanche family because they have two wizards and once to the family at 14, 23, and 24. By doing this, I significantly reduce the time fighting in battles and also make a family more likely to surrender once they are weakened. I can also do this at 19 when I get Pender to defect. This is a game crushing tactic as it removes the strongest opponents in the game and allows me to take up land.

I usually dedicate certain territories of mine to perform certain actions. The first month of this run ended up where I needed it but I got there horribly. For example, it took me three tries to get 19 to defect when I usually reset if I fail once. It's important to not waste turns in the opening but I was accomplishing everything that I wanted, just ass backwards.

I spoke about acquiring 19 early to ensure that I would have a turn and attack 20. This did not happen. Usually this is a reset but the territories didn't fill up with opposing forces in the lower right like they usually do. The one thing that kept me going was when I captured Prince Erin of the Blanche family. If I remember correctly he had actually attacked me, which I don't really like because it can be a time waster. Generally I need to kill off my opponents troops and can do so when attacking or defending but I'd rather kill and take the territory. You can get lucky and capture your opponents leader in a fight and if you do all troops are killed, or just can't retreat. Because of this I wait it out when attacked to see if I can at least capture all the troops. Turns out I captured Prince Erin. I then have three options; recruit, release, or banish. I can never recruit Erin, so I banish him and control of the family goes to a vassal named Karl. If I can capture Karl and recruit him, he will always join my forces, 100% of the time and guess what, every other territory under his command will join me as well. This is a must in the speed run if not the sole mission. I do a pretty good job of it as capturing Erin can be tough.

So when I captured Erin I hung around.

The other key factor is to acquire 16 early enough to hire gunners in the month of January. Once you have the gunners you will annihilate any enemy forces put against you. Luck manipulation comes into play as it's conceivable to have your gunners move from 16, win a territory, and attack on the next turn from the territory just acquired. It's a beautiful thing, just shredding through Eselred's forces on one the more complicated maps at 22, right at his heart.

Once enough damage has been done to enemies and their troop counts get low and they become surrounded they will usually surrender. Once I get the family on 18 to defect and take down the Blanche family 17 surrenders. The Terian family, originally at 14, 23, and 24 follow suit and surrender once their numbers get low. All that's left is to move into all of King Eselred's territories, who never surrender, and pick off the enemy units. While I do this, I try to line up my gunners to attack the bottom left family, the Divas Family. The ruler of the Divas family, Prince Eadric, will also allow me to recruit him. Because of this I actively try to only attack spots under his rule. If I capture him the rest of his territories are mine. This is also a critical aspect of the game.