Ghost in the Shell is a 1997 action game placed in the world of the anime with the same name. Employing unique wall-climbing gameplay, the game follows the original story of the Public Security Section 9's struggle against the Human Liberation Front, lead by the numerically much superior Zebra 27. 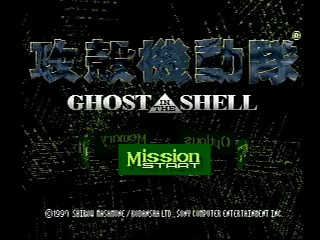 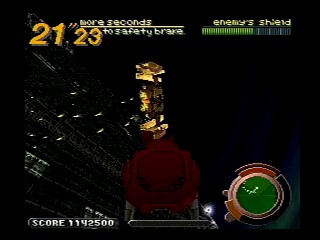 This game has one trick called enemy boosting where you jump on an enemy and if you hit them at a certain angle and point on the enemy they will give you a small boost of speed. Unfortunately some enemies are very picky about this trick and will send you in the completely wrong direction or will get you stuck in some of the indoor levels.

Grenades are also very important as they speed up the boss fights but I can only carry three of them and most of them are in places where going to get them would actually waste time.

I also apologize about all the complaining I will probably do about the auto-aim it really is awful in this game and has killed way too many runs that had green splits.

Mission 1: I get the enemy boost this allows me to get 1 of the two good patterns on the very first enemy. Missiles are finicky in this game if you charge too early you will lose your charge too late and you will have to sit at the enemy waiting for the charge. Boss fight was good no mistakes made.

Mission 2: I need to take as little damage as possible early on so that I can get through the later mines if the auto-aim decides to stop working properly. I get the boost off the soldier in the first section which is good. It is possible to get a boost off the second soldier but there is also a higher chance of you getting stuck on him if he is not in the correct spot. I manipulate the enemy after the mine hallway so that I can get past him as trying to jump over him will always lead to being stuck. I get all three enemy boosts at the end which is good. Boss fight is clean I take 1 hit which does not waste too much time.

Mission 3: This mission is the the killer of runs because auto-aim for whatever reason does not like these barrels and I have no way to manually aim. Luckily for once the auto-aim behaved for me. This is the first level where wall climbing is a thing and it also has tiny platforms that you need to shoot barrels on. I would have liked to go faster on them but if I try to dash across them I will not regrab the wall if I move too far so it usually leads to me resetting. Boss fight was good I manipulate him into his standing pattern which is a joke to fight as I just need to aim carefully and circle strafe.

Mission 4: Autoscroller with no mistakes. Boss fight was good got the quick kill on the minion which you need to kill or else the boss will not come into range. Boss for the most part stayed away from the other enemy which would mess with my auto-aim.

Mission 5: Boring boss fight level nothing to really say about this it went as well as it has in every other attempt I have done in this game. I kill some enemies during the down time for absolutely no reason other than hoping it will let me get a new high score.

Mission 6: Autoscroller with no mistakes. Jumping in this level is very dangerous as enemies and ceilings can make you lose a ton of time if you bump into them. Boss fight went pretty good the auto-aim did some funny things but fixed itself almost immediately.

Mission 7: Destroy the cannons so you would think trying to charging missiles would be a good idea right? Yea I thought so too until I tried doing the level with that strat. Too many little enemies can hit you out of the missile charge or steal the lock ons so it is not worth it. Boss fight went good only had 1 jump in the pattern I got a 0 jump pattern is possible but this pattern turns into grenade hell so you usually have to back off so that dying is not possible resulting in it being slower.

Mission 8: Straight forward level I use a grenade to clear the objective enemies out instead of chasing them around and wasting time. Boss fight went about average nothing too special here.

Mission 9: I go slightly out of my way for a grenade but this saves a ton of time on the boss so it is worth it. Also another autoscroller section although it is not an entire level this time. Boss fight went extremely well the auto-aim here is horrendous and the fast that it behaved so well is magical.

Mission 10: I get almost all the boosts I want and somehow recover from the turret somehow putting me onto the wall even though I was dashing which should not be possible. Boss fight actually went about average this fight is pretty much completely random I have no way to manipulate them and if they decide they want to cause lag I can't stop them. Also they do a ton of damage so the risk of death is very high here.

Mission 11: I pick up the two grenades and take a boat load of damage. Failed the lase enemy boost but it would have been worse I could have been stuck. Boss fight went well although I did have to play a little safer with it since I was at 1 hit kill territory for most of the fight.

Mission 12: This mission is apparently very hard for most people that played through this casually but for me it is actually the easiest mission in the game. At the jumping section I have to slow down if you try going full speed you will always fly right over the platforms also I can not see what is below me so I have to guess where the platforms are most of the time. I fail at picking up the health but it really is not important since it would have only helped if the boss gave me an awful pattern. Boss fight went pretty well he usually will teleport way farther and more frequently but I got lucky this time. Second boss phase is just circle strafe and shoot.

Overall I am pretty happy with this run it could be improved if you are really willing to try to get the best possible pattern on the twins but the luck I got on the other bosses makes me really not want to do that right now also auto-aim.