Released in November 1986, Ghosts 'n Goblins is well known by many players as the game with "that impossible to hit red demon bastard". As Sir Arthur, you must save the princess from Astaroth not once, but twice to prove your strongth and create a happy end. 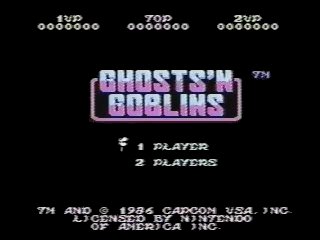 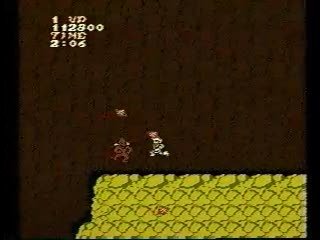 After setting an inaugural completion time of 22:56 in 2006, I let the game rest for four years. In 2010 I decided to update the speedrun to a higher level of quality that I was seeing in the new runs being posted to speeddemosarchive. I believe I succeeded in doing so, but due to circumstances, my original VHS tape of the 21:45 run was not returned from twingalaxies. I had to settle for submitting a medium-quality capture of my own to SDA, and so I immediately tried to match or beat that time simply in the interest of better video quality. But, I was burned out on the game, and didn't follow through. So in 2013 I managed to beat the 21:45 more than once, but I was holding out for a run that looked finished, regardless of time. I finally managed this 20:52 in April 2014.

The graveyard-forest stage is played exactly the same as my 2010 run. I never did figure out how to force the boss to stay on the ground instead of jumping, so this run features the "slow" boss with two jumps, which is at worst 2 seconds longer than a "perfect" boss.

The path taken through the frozen towers forces the ogres to spawn in favorable places. This is a new concept since 2010 and led to a much higher percentage of runs reaching Stage 3 and beyond. It reflects my idea that the "randomness" of this game is simply fixed behaviors based on obscure triggers. Perhaps when more of the triggers are uncovered, the run time can be improved further. As always, the bird shortcut is a set event and can be counted on to work 100% of the time in Round 1, excepting errors in execution. I did not manipulate the platforms well and lost a few seconds, but then had a perfect boss fight.

It's always nice to take out both tower monsters before they get a shot off. The first two red devils were total jerks and I almost reset. Of course, I'm glad I didn't. The boss also dodged some shots that would have taken a few seconds off had they connected.

The eyeball platforms and fire bridge make an easy, scripted stage with no surprises. Unlike Stage 3 and Stage 6, the dragon boss of this stage has multiple flight paths – some fast kills, some slow kills. This is a medium-fast pattern and I was happy to get it.

I take a new damage boost that saves 3 seconds. It looks like I'm getting slowed down by an ogre, but I manage to catch the 2:50 ferry (eyeball platform) and that's the one I hope for. The rest of the stage went fine. Boss fight went great.

The red devil of stage 6 is usually referred to by myself as "Total Bastard." But in this run he caused no trouble, and simply flew off the screen. It does happen occasionally, but I never discovered a way to force it. Just good luck. Bosses went well, I'm glad I still had my armor.

This is always the same fight. Nothing new here. Overall, my Round 1 is over 20 seconds faster than the previous run.

Now the real challenge begins. I can no longer count on the enemy behavior like I could in Round 1, so you're watching me at maximum focus, putting my reflexes and strategy-options to the test. The first thing I need is a new weapon, and a knife drops in front of my path, which is good. Zombies didn't bother me too much, the red devil went down easy, I only had one set of flying knights, and the burrito wraiths didn't slow me down either. I did get a surprise weapon change to the lance, but that's not really a problem. It also happened that way in the previous run. Another jumping boss, but a very good Stage 1 in this round.

I don't know how the frozen tower path affects the ogres in Round 2. So I'm just hoping for the best. I manage to steer and avoid all the "problem ogres" and reach the top of the town, then take the first bird over the wall. This is the best that can happen, and I was very fortunate. As an added bonus, I correctly manipulated the platform that I got wrong in Round 1. The bosses were good but not great.

I mentally prepared myself for the start of this stage. I knew the bats were coming in fast, and I knew I had to look out for all three zombies, which are a bigger threat this time compared to Round 1. Completely focused, I still couldn't avoid getting hit at the very start. Perhaps a knife would have done better work. I thought the speedrun was going to be over soon, but pushed on. Annoyingly, I had a two-cycle tower monster. A bat got in the way of my first red devil fight, which then took longer than I had hoped. But, I survived, and kept going on. Never reset in Round 2. The rest of the stage went very well. Even the boss was defeated in the minimum number of passes for that flight pattern.

Getting hit at the very start – again – threw me off a little. I missed shots intended for the blue devils, but regained control halfway in and finished fairly well, with another "good, not great" boss pattern.

The good fortune in these last 2 stages made up for all the other shortcomings of this round. Immediately in Stage 5, I avoided getting hit by both the blue devil and burrito, somehow. I avoided getting hit by a dangerously close orge. Then I caught the 2:47 ferry – which I've never caught in Round 2. An ogre I usually fight didn't spawn. It ended with a pretty good boss fight.

All I ever want from a Stage 6 is a good fight against the red devil. So I was happy to see him fly off again. I can't think of another attempt that this happened in both rounds. Good bosses, too!

Continuing a tradition of losing focus at the end of a run, I looked away at the timer before the boss was defeated. I had missed the final shot. So I had to make one extra jump to finish him off. And that's it.