Released in December, 2000, Giants: Citizen Kabuto is a third-person perspective shooter game made by Planet Moon Studios (members of which were responsible for MDK) with real-time strategy elements blended in for good measure. The game pits you as a member of one of three different races (including the titular Kabuto), and was praised for its unique mix of genres and interesting gameplay. 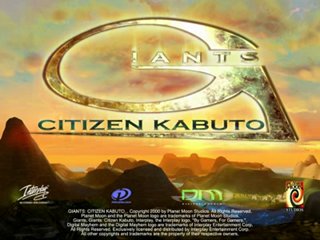 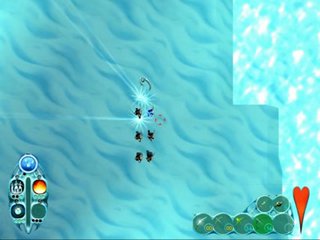 First of all, I'd like to thank Pendrokar for his great speedrun of the game. It showed me many routes and strategies (I've used many in my run) and inspired me to start working on my own one. I'd also like to thank Kabuto for his useful wiki contributions.

The run was done on PC version 1.1 of the game, mainly due to the advantage over 1.0 in early Kabuto levels that lets me save over a minute. I've also decided to have more segments, as there is a lot of seemingly trivial parts that are randomness-based. It made me restart more than I'd expect - so there are now 49 segments total.

Some brief notes about individual chapters:

Meccs:
Story 1: Slightly changed route in level 1 and 2. In level 2 there's not much place for further improvements due to the fixed times when smarties fall from the cliff. The rest is quite easy - just have to avoid the trees (the fallen one's hitbox doesn't exactly match its shape) and get at least one pack of grenades from a reaperman.

Story 2: One grenade kills enough vimps. Route is completely different in level 2 - no more swimming this time. Nothing special in the later parts of the chapter - it's mostly grenade jumping.

Story 3: The real fun begins here! More reapermen to kill = more random patterns. My teammates can be really helpful in level 3 and 4. Later, in level 6, there was an opportunity to trigger the invincibility glitch - it was unused in the run, as it takes about 10 seconds to do and does not save much time in a segmented run. The prison has some weak spots behind, that let me avoid the shooting spree at the gate :)

Story 4: I've lost 7 seconds in level 1 due to version differences - popup bombs are no longer kept after restarting a mission since 1.1 patch, so I have to get one from the shop while being constantly shot at by snipers and reapers. The fadeout at the end is long enough to get another bomb. Using machine gun and grenades against the offspring is more effective than the missile launcher alone. Level 3 strategy is the same as before - looong jump with 12 mines. 2.5 seconds were saved (whoa!) in this chapter.

Story 5: The charger is a nightmare. I've probably restarted the first level more than any other segment of the run, because this bastard won't open his mouth or the shot will somehow fail to hurt him. At least one mortar shot is all he needs to die. The whole base building is skipped, as I have a bomb from 4-1 :) Everything takes just a minute.

Delphi:
Story 1: I hate this chapter - espiecially levels' 1 and 2 strategies... The mines dropped by a reaperman saved me here. Reapers in level 3 can still use turbo while shrunk, unlike me. Lots of resets happened because of random enemies' patterns.

Story 2: Saved a minute over the previous run in the base building mission, and also placed the second portal much closer to the start point of level 3. The whole chapter was done in one segment so I could use the portals.

Story 3: Slaying the reaperman army with hail, time slowing spell and powerup bow (if it's kind enough and shoots). Using turbo as often as it's possible (except on land, where it doesn't work) and controlling the boat with mouse for more precise movement.

Story 5: Doing level 1 and 2 in one segment, this way more smarties spawn close to the base (6-8 instead of 2-4). Using the same strategy against Sappho - jump, triple shrink, double RPG bow shot. 54 seconds saved total.

Kabuto:
Using more segments due to the randomly not responsive attack controls and the itch to make the run even faster. I've saved about 1:20 here due to version differences - since 1.1 patch Kabuto needs to eat only 3 smarties to grow instead of 5. In chapter 2 level 2 the raik glitch turned out to be completely unreliable - it changed behaviour every time, so I've taken another route and forgot about the raiks. The gate before the portal does not have to be destroyed to trigger the end of the mission. The rest is very similar. I was surprised with the result of the final fight with Kabuto - two grenades and three RPG shots were enough to defeat him in 10 seconds, before he was even able to jump the second time!