Give Up, Robot is a flash platform game created in May 2010 by Matt Thorson, where the player is tasked with subduing their robotic captors by utilising a grappling hook to progress through multiple technicolour obstacle courses. 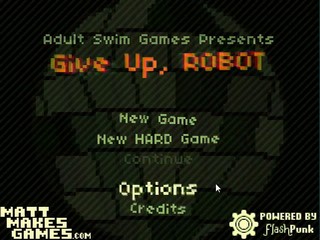 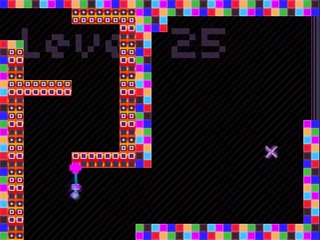 Oh my, another platformer by Matt Thorson! Seriously, I would hate this guy if he wasn't also the author of An Untitled Story – a game you shouldn't miss if you're a metroidvania enthusiast. Give Up, Robot is a hard platformer where you can die basically anywhere, just like in the Jumper series. I suggest you give the game a try before watching the run; you can find it on Adult Games (the official website to play it). Before the game is loaded, you will see a small advertisement (Armor Games-style); please note that I HAD TO ENDURE IT BEFORE EVERY ATTEMPT!

So, why this run? Back in February, I was verifying Zach's run (his first submission). I'm easily attracted by platformers and it was enough to persuade me to play the game more in-depth. Still, I wasn't sure if I wanted to invest my time in this devious one-man production and risk an epilepsy (just kidding, but the game is excessively flashy and blurry), so I simply recorded some strategy guide to help anyone interested. By doing so, however, I began to have a good knowledge of the game, which I didn't want to be "wasted". So I finally changed my mind and started to play more assiduously. The hardest thing was probably to memorize the order of the 50 levels, but after around 15-25 hours of extensive practice, I was ready to record my first attempts (you know you're ready when you have died at least once in every possible location). The final result went out surprisingly quick, after gradually better attempts, in less than 24h (including a good night sleep!).

A remark related to the gameplay:
* The grappling hook system is absolutely not intuitive. I'd almost say it's a bit random. The only thing you should know about it, tough, is that the longer the rope when you release it, the faster you can go (assuming you don't release the arrow keys afterwhile).

Note that the values indicated for rooms of improvement are only assumptions. I played each level individually to get an idea of what a "TAS" would look like and compared these times with my single-segment, nothing more.

Thanks for watching the run! I hope you enjoyed it. It was a true challenge.
If you want to leave me your impressions or ask any question, feel free to contact me at arcanod (at) gmx (.) com.