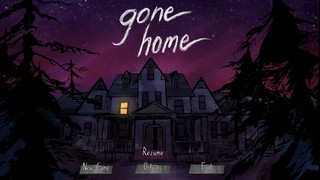 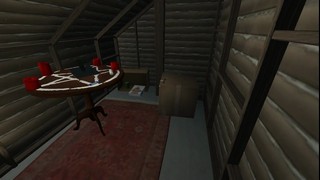 Gone Home is an independant narrative driven game about exploring a house and finding clues as to your family's dissapearance. This speedrun of course does none of that and just goes straight to the end. It also manages to contain major spoilers for the game, despite skipping the vast majority of the narrative content. So, if you're thinking about playing this game, I'd recommend not watching this until you do.

The first timesaver involves starting the game facing to the left. If you move your mouse to left as the game is loading, that mouse movement will be taken into account when the game loads in. It doesn't save a huge amount of time (and strictly, it doesn't save any time over a perfect run that doesn't use this trick), but it makes the initial keyboard movement a whole lot easier to pull off.

Once we get inside, we have to clip through the secret door. All this trick involves is pressing the interact button twice. Once to open the door towards me, and once to close it again. This lets me walk through it. When I walk through it, the door stops as if it had hit me, and remains partially open. When leaving again, this lets me interact with it so that it closes on me instead of opening outwards, thus letting me clip through on a double interact in order to leave.

The attic key grab was pretty good. I went slightly too far in, and should have started going backwards a little bit earlier, but it's still pretty close to ideal.

The stairs are taken straight up, because you move slower while ascending stairs. So, it's fastest to take the stairs straight up and then turn towards the door rather than take the stairs on an angle, and spend more time with the slower movement speed.

The rest of the run is very straightforward. I got very good interacts on the attic door and the journal at the end.