1985 saw the release of the sappy kid-adventure movie The Goonies, written by Steven Spielberg and starring Samwise Gamgee. The 80s were a blissful time when every fantasy or adventure film — no matter the quality — was turned into an extremely loosely-based NES platformer, and Konami did not disappoint. The Goonies was released on the Famicom in 1986 but never saw an overseas release. For no real reason, Konami decided to make a sequel, The Goonies II, which was released internationally in 1987. The sequel has even less to do with the movie, but it adds some first-person sections and inexplicably a captured mermaid to go along with the platforming. 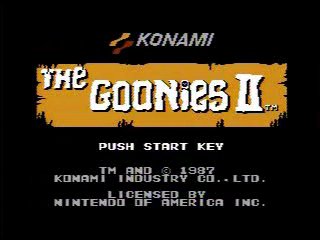 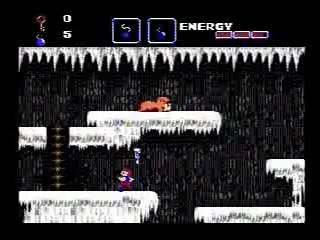 I've been out of the speedrunning scene for far too long. What better way to get back in to it than running an old, moderately obscure NES game?

Why Goonies II? Well, I used to have it way back when, but I think I loaned it out and never got it back.

I Managed to stumble across the TAS of this, then decided to start practicing up for my own run. After watching the TAS I immediately went to work improving the route. I found a few points that could easily be changed, and one major change.

I decided early on to avoid going after items/Goonies until after obtaining the Hyper Shoes. The faster I move, the better. The only exceptions to this are the Glasses and Goonie #1 + the Bomb Box. I need the Glasses on the other side of the bridge and it doesn't make sense to backtrack for them. The Bomb Box is needed to get the Hyper Shoes, and is the earliest one I can get my hands on. Otherwise this Goonie would have been saved for much later.

The major change I found was to skip the Jumping Shoes altogether. It takes roughly one minute to go get them (plus a Key Holder on the way). The problem with doing this is that I can't take the normal route through the Purple Caves. Instead, I backtrack through the Volcano. It's actually about 10-15 seconds slower to use this route, but that still puts me 45-50 seconds ahead.

Later on not having the Jumping Shoes also prevents me from taking a couple of shortcuts, but I don't see it costing me more than 10 seconds total.

There were a couple of tricks I couldn't perform that well...both have no room for error.

The first in the Red Caves when heading toward the Bridge for the first time. It's possible to jump to the moving platform and off and make it to the other side without waiting for it to come back. My success was somewhere around 1 in 30 or more.

The second is on the bridge itself. It's possible to make the jump to the first moving platform without waiting for it. My success was somewhere around 1 in 30 again. Note that it's easier to make this jump if I'm coming from the vine rather than the Hyper Shoes Door.

There were also a couple other points that were troublesome.

First is the stretch between Goonie #1 and #2. I have 3 bars of energy to work with, and a lot of possible damage to take. Since jumping through enemies is faster than killing them, I had to decide when to wait and when to berserk. I actually wound up with more life this time than usual.

Next, we have the run from Goonie #2 and #3. 4 bars of energy this time. Most of it gets spent in the Green Caves. Arrived at Goonie #3 with about the usual amount of energy left.

Goonie #4 to #5. Not only are there energy concerns, but also a nice randomfactor tossed in.

1) Backtracking through the Volcano is practically suicide. The Dragons do 1 full bar of damage, as do the fireballs. I'm very suprised I managed to get through there with as much energy as I did - I died there quite a few times.

2) Before I rescued Goonie #4 I killed a few enemies and for a Bomb in return...I didn't want the Bomb. I wanted a Key. Since I skipped the Jumping Shoes, I had to rely on a Key drop from enemies. Items only drop off every third enemy killed, so I had to search for places that it wouldn't cost me much time to kill 3. I wound up unlucky and got the Key on the 3rd (and last that I was allowing) attempt.

If you're wondering why I climbed a ladder then climbed right back down in the Ugly Green House-Type area, it was to reset the spawns. All enemies wait somewhere between 3 and 5 seconds before they start spawning. You'll notice on the way back that there's a Knight at the bottom of the ladder, which can do 1/2 to 1 full bar of damage (depending on whether he's charging or not). I didn't want to risk the damage.

Goonie #5 to #6 isn't normally that close of a call. I was unlucky when the Dragon on top of the first platform knocked me off...I was pretty sure I was dead. I managed to save it after taking a few hits, which is why it was so close.

I'll just point out the differences:

The run doesn't look any different until the Green Caves, where I have to grab a Bomb Box and the Waterproof Coat, and a Fire Box on the way out.

Next is the Helmet in the Red Caves. Without the Hyper Shoes, this would have taken quite a bit longer.

Goonie #1 to #2 has the exact same difficulty. Goonie #2 to #3 is also the same even though I have to sidetrack to get the abovementioned items.

I screwed up the Bombing Point of the 1-Up Room. The only reason I get this is because it's the only one in the game, and it "technically" helps you.

I sidetrack for an extra Key Holder and the Jumping Shoes in the underwater area, plus I grab the Bomb Box in the room next to where I obtain the Ladder. This means that backtracking through the Volcano to get to the last Goonies isn't worth it. Speaking of which...

Goonie #4 to #5 is MUCH easier this time around. I take the normal route through the Purple Cave which is quite a bit less threatening. There's also a Bomb Box that I have to pick up on the way, plus the Bulletproof Vest.

If anyone was wondering why I stopped to kill the Flying Heads on the bridge: They eat Boomerangs.

Goonie #5 to #6 is harder than last time. I have to sidetrack to get a Fire Box, which has a lot of damaging enemies in the way, even with the Bulletproof Vest. The Volcano is a little less threatening this time around, but just like last time, I arrived at the last Goonie with 1/4 of a bar of energy.

From here to Annie is just 2 more Fire Boxes, which aren't very far out of the way.

A couple other notes:

I skip all Magic Locator Devices. The game considers them "obtained" once you rescue the Goonie it's pointing to.

In most cases switching to the Jumping Shoes to jump off of a moving platform sooner is actually the same or slower since menu time is counted against me. I still did it a couple times without thinking.

...and if you actually bothered to watch both of these runs, you deserve a cookie.