Released only a year after Grand Theft Auto III, Vice City brings back everything you loved from III and introduces many new improvements of its own, including a more talkative protagonist, Tommy Vercetti. Join Tommy as he wreaks havoc in a 1980s Miami, Florida setting. 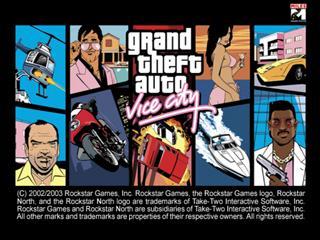 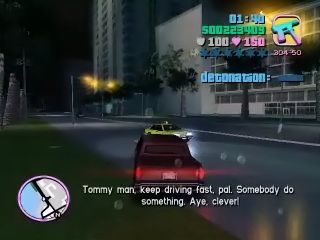 Runs on the PC version.

Note: A 30-second penalty was applied to this run for a failure to show saving, the continuity is fine.

First, once a Dink, always a Dink, you know who you are!

Second, thanks to all who thought of the great strategies used in this run, sub two hours would have never been possible without them (Mike's note: I think he means in-game timer).

Third, my skills behind the wheel are mediocre at best, some insane driving and lots of murder-death-kill was involved to achieve the fastest time possible. Cursed with flatires, aggressive traffic, and cracked out pedestrians, for those of us who are "Bipolar" VICE CITY is a dream come true.

That's it for my run.

Firstly, big thanks to the SDA staff and everyone who gave their support! Each run has been more rewarding than the last and I hope it continues.

The bibliography isn't very big, working from first principles is far more fun. Still I can't not mention the site http://www.astonvilla.dk/GTAVC100 for Christian Jahnsen's extremely helpful maps. They got a hell of a lotta use...

I've always enjoyed Vice City more than GTAIII, nice sunny vibe etcetera, so I attacked the daunting 100% task with great enthusiasm and completed it only a little over a month after I did its predecessor. It has almost twice as many rampages and unique jumps and more extra challenges, so since I'm the sort of person who gains more enjoyment out of planning than actually attempting a run I was really pushed to my limits here, but I'm sure that my obsessive optimisations of both of these will be very apparent.

I tried to improve on my GTA running in every way, and with hindsight my previous run could be considered a warm-up to this. Being comfortable with the controls from the very beginning made a nice change (with the addition of bikes and the unwanted ability to jump out of moving cars leading to many hilarious situations...). The game has more stuff to do in a more compact area than no. III (mainly due to assets), so doing everything without jumping around too much was the main goal. Obviously not everything can be accounted for right from the start (and a practice run wouldn't help too much with the bulk of it) so the best I could do was chip away at it in a state of heightened common sense and make a million contingency plans for the countless times things didn't go my way. In the end it fit together more than I could have hoped for.

There's a lot of side-missiony stuff that can't be done during your run-of-the-mill missions, mostly rampages and rc races, and most unique jumps that require a speedier vehicle. So while I tried to do as much as I could when I was passing through anyway, there were occasions for systematically traversing the city and mopping up all the little things. I tried not to overdo this freedom; it would be tempting just to go out and do everything right at the start/end and not have to worry about tasks overlapping and such. Instead I planned it around instances when I'm left stranded in areas devoid of much else to do, preferably with a nice bike, and worked my way over to the next mission as efficiently as possible. This is harder to put into words than I thought it'd be, can I just say it's all rather complicated and leave it there? Good. Onto the segment comments!

Once again, percentages and stuff done in each segment is noted cumulatively so everything is accounted for and you can see how it comes together over time (if you want to). I wasn't sure how to categorise some stuff, almost everything appears to be piled into one value on the stats screen, so I've differentiated between certain things.

Thanks very much for watching! Hope you enjoyed it, and I hope my comments gave many a valuable insight into the sort of mind that would actually attempt something like this (I think these are my longest ever run comments too). I'm working on San Andreas at the moment (no, not 100%, it's just not going to happen), so look forward to that whenever I get round to it.

If you have anything to ask, my email is ddaburns AT gmail DOT com - please don't make me regret putting it here!