Released in January 2013 by Hörberg Productions on the 3DS eShop, Gunman Clive is a sidescrolling platform game where the player must rescue the Mayor's daughter from a group of bandits and bring order to the West. The game features a unique sketch shading artstyle and bosses many times the player's size. 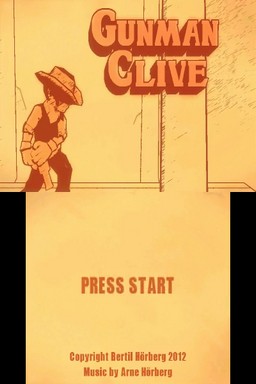 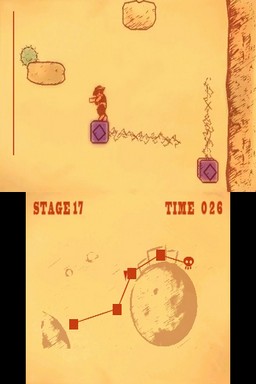 This project started in late January, roughly 2 weeks after AGDQ. I bought the game for £1.99 and it's probably one the best games on the 3DS eShop!

Within less than a week, I started creating individual level speed runs which were pretty easy on most of the stages because of the simple level design.

It took roughly 3 days to speed run all 20 stages in IL style.

Clive is pretty much Mega Man without the slide as he can't shoot up or down.

Ms. Johnson can float for a few seconds, but has to stand still when shooting on the ground. So she needs to be in mid-air before shooting to prevent losing time.

Duck mode is basically playing as a duck who can perform small extra jumps in the air, s/he is unable to use weapons and ignores the boss stages so it only needs to playthrough 16/20 stages.

Thanks to the 3DS second screen it has its own in-game timer, not seen on the other versions.

This is great because the stages are very short and it makes it easier to judge the fastest time without having to use Virtualdub's frame counter.

Then I sent them to SDA to get the run verified, the verifiers were impressed with the times and one of them did notice a possible improvement on stage 3 and so I retried that stage and some of the others I've notice were improvable as well.

There are 3 notable tricks that you can save time on certain kinds of stages.

Transition effect abuse - To get a good time on a certain stage, you need to play through (or quit) a different stage first. Then as you select a level you want to focus on, the in-game timer doesn't start right away saving ~0.3 seconds

Platform manipulation - Stages 2, 4 and 11 are notable as I hang around the title screen for a bit, this is to manipulate the platform position as I start a stage. You can't do this if you use Transition effect abuse or going to a different screen as the platform's starting position are fixed.

Stage 1 - 42:58 - Taking damage at one point looked a bit rough but I gained little horizontal momentum right after taking the hit

Stage 2 - 50:20 - The first stage that uses Platform manipulation. You'll notice that the previous stage attempt was stage 2 so retrying on the stage by selecting it on the menu skips the transition effect but you lose a few milliseconds in-game time, however I make up for it significantly by making sure the moving platform is in a good position after climbing to the top of the second ladder.

Stage 3 - 40:33 - After the first set of verification notes, I tried the time saver that skips having to use one of the platforms properly saving just over 1 second.

Stage 5 - 15:35 - One of the more painful boss fights in the run, if the boss ever jumps it's pretty much reset because sub 16 is impossible.

Stage 6 - 42:83 - The stage is pretty easy, needs a little bit of luck by getting a spread gun drop to kill the horse riders. The toughest part is the ladder skip without any slowing down.

Stage 7 - 34:49 – One point of the stage I take damage, even though it looks sloppy it's actually faster than jumping over the enemy by 0.1 second. This run was made before TAS tools even existed so it's hard to confirm this at the moment.

Stage 9 - 36:23 – Lots of tough optimisation in the last room, the jump to avoid taking the hit from the ceiling turret's spread shot is very precise.

Stage 10 - 13:67 – This boss is pretty tough to react on dodging against those punches but you'll know where the ‘fist' is ending up by judging where the face is looking up or straight ahead.

Stage 12 - 34:04 – This stage gave me a bad weapon drop which didn't cost me any time but it makes it harder for me to hit the last enemy in this stage. Fortunately I manage to hit this last enemy without any pausing/slowing down.

Stage 13 - 44:99 – Rotating platform physics! The random jump when I was on the vertical moving platform was to manipulate grenadier to throw sooner.

Stage 14 - 41:68 – Another picky stage, one there is a ladder skip that is easier to execute than the one in stage 6. Then on the screen afterwards I take damage on purpose to abuse damage invincibility and advance much sooner than not taking damage.

Stage 15 - 07:00 – This is one of the two stages where I use a power up found from the previous stage. Stage 14's most powerful weapon you can obtain is the laser shot, it has x2 the damage points than the regular gun and the rate of fire is amazing. The dark orbs cannot be found until Stage 17 & onwards.

Stage 16 - 47:65 - Pure autoscroller. Just make sure you use the transition abuse and touch the very edge of the screen near the end of the stage

Stage 17 - 40:98 – I call this Werster's RNG hell because the first screen has the biggest amount of RNG in the game, at the end of the first screen I want either: Dark Orbs or Explosive bullets. This should enable me (short) time to destroy the spinning turrets without having to contact them. The Explosive bullets is 1 shot kill, while the Dark Orbs goes up very slightly like a grenade launcher, enabling me to damage it sooner than any other weapon.

Stage 18 - 31:67 – One of the easier stages in the game, it's pretty straight forward as there are a few time savers and introduces the gravity mechanic, Super Mario Galaxy 2 style.

Stage 19 - 48:58 – This stage does require a bit of luck by having a good weapon drop. The dark orbs is good but the explosive bullets is better because you can 1 shot kill every regular enemy in the game, this is especially true in the last screen where I only have to pause/shot once to kill an enemy while climbing up the ladder.  On the final screen, it's better not to go too close to the electric trap because it spawns one of latter enemies near the end of the stage.

Stage 20 - 18:11 – So you can save a few milliseconds by NOT selecting the same stage after quitting & retrying or completing the stage (Stage 20 only). So in other words, decent attempts on this stage requires

- Farming a dark orb weapon found in stage 19 (second stage where I use a powerup found from the previous stage).
- Getting good luck on the first of the two final bosses, very rarely he goes to the right first.
- Performing 2 tight execution tricks. One is to jump at the right time; the other is to mash the fire button to kill the final boss in a single cycle.

Most of the time I mess up the final trick which is either the jump and/or mashing the fire button, because either I am a few shots too slow or I jump too early/late. There is so much downtime in between attempts because farming a good gun from the previous stage isn't always as quick as you think.