Released in September 1993, Gunstar Heroes is considered by many to be the best action game, or best game period, for the Genesis. Gunstar Heroes has a lot of variety in both the moves you can perform and the stage design. As Gunstar Red or Blue, your mission is to rescue the four gems from being in the wrong hands. 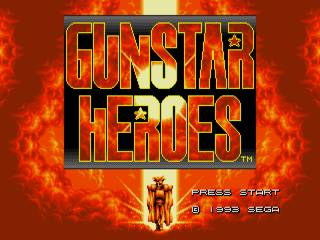 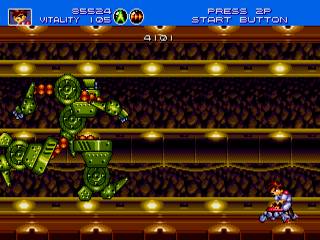 Well hopefully this speedrun lives up to the quality of one of the best action games ever. Am I biased? Maybe a little.

I would like to thank StrangenessDSS, Jackic, and Fale for contributing to this run.

StrangenessDSS: Gave me a good strategy against Minion soldier, even though I ended up not fighting him.

Jackic: His TAS (or whatever you want to call it) had good strategies for the fifth stage and fighting Orange the second time around.

Fale: Gave me the suggestion of throwing the flying bomb carriers to eliminate the Phantoms faster in the fifth stage.

Weapon Choice:
I only use two weapons throughout the entire run, the flame chaser and the lightning saber (flame + lightning).

Flame chaser: By far the best weapon in the game. It is either first or second best in terms of damage (the only competitor being the lightning saber), it nullifies enemy bullets, and it has the best range of any weapon in the game. It is a little hard to control, but that is hardly a factor in a speedrun. The only drawback to this weapon is the fact it is unuseable in the spaceship shoot'em up section of stage 6.

I choose fixed shot instead of free shot because it is impossible to both control the flame chaser and your character simulataneously.

Movement/Path choices:
In terms of movement I usually jump kick like a maniac followed by a quick shot of whatever weapon I'm using. There are exceptions, like when I need to slide under things, I use the powerslide (half circle to the left or right, then B). Occasionally I simply jump without a jump kick, this is either done for positioning or because I'm being an idiot.

If you're wondering about life collection, I only collect life if it doesn't cost me any time, otherwise I skip it.

There really isn't much to say here. My weapon switch isn't perfect, but after going over the first 30 seconds or so over and over again trying to get a good weapon switch I decided to keep on going. Other than that the stage went just fine. I know about staying in the top left corner, but I thought it would look boring during the auto-scrolling section.

Black stage: I will admit I got THE BEST LUCK EVER on the Dice Palace. I really don't think you could get any luckier playing on a console without save states. I didn't even roll a single one. My performance through this stage was good, but I screwed up at the dice throw glitch more than I should have. Also, my Black battle was slightly slow due to being indecisive about my positioning.

Orange stage: Overall a great run. My only goof was during the Orange battle. I need to make Orange blink once to start damaging him with throws. Usually after one kickup he will start blinking, but for some reason he was very uncooperative and I had to throw him first before I could make him blink (and this was after 4 or 5 kickups).

Green stage: Great run, I only got hit by Seven Force once and it was a stupid flukey hit. The only glaring mistake was after I beat the stage I paused the game by accident because I was overeager about skipping the intermission. During Crab Force I stopped shooting him for about a second because I was afraid of getting hit and my thumb was getting really tired from all that flame swirling.

Fifth Stage: I switch to the lightning saber this stage because it is absolutely necessary for the next stage.

Yes, I get hit a lot here, but it can't be helped. The stage is really long and there are enemies constantly respawning. Furthermore, towards the end the walkers get taller and taller and it isn't worth trying to get past them without getting hit. I managed to jump kick through two of them without getting hit because I was incredibly lucky. My Smash Daisaku battle was pretty good, but the two hits I took were really dumb on my part.

Sixth Stage: If you are a hardcore shooter fan then you probably don't want to watch this stage. I'm mediocore at shooters so you will probably think I kinda stink :/ There was nothing catastrophic that happened and I got the weapon switch I wanted after I completed the shooter segment. I know about staying in the upper-left corner when the lasers come, but I think it looks boring so you get to see me get hit instead, yay!

My Core Guard System battle went well, the only bad part was the Unit of the Dragon using its spinning attack, wasting 20 seconds. I shouldn't have been hit by Unit of the Runner, but the battle is so easy I got complacent.

Final Stage: This is one of the crappiest runthroughs of the final stage I have ever done. Usually when I get up to Golden Silver I have 160-180 life, and he usually only hits me with 40-50 points of damage.

Duck Battalion: They gave me a really easy pattern to work with and I take them out with no hassle. The Gunner I fight afterwards gave me some problems. I was just outside of throwing range when I shot him by accident with a flame chaser.

In between bosses I swear I pressed the jump button to perform a jump kick, grrrrr.

Pinky Roader: I almost never get hit during this battle but Pinky Roader did something really bizarre. Usually when I fight Pinky Roader it usually chases after the side I'm on, but this time it stood just left of center and started spewing bubbles at me. It was very stupid of me to walk into the bubbles, but I didn't think bouncing off the wall and jumping on top of Pinky Roader would work (even though it probably would have).

Orange: This battle went well. In theory, I could have thrown him more, but that requires Orange attacking me less.

Black Fly: I got really lucky during this battle and after Black sent the energy batons after me, he shot into the center of the screen, which almost never happens. Going to the top of the screen was pretty stupid, but I thought it would be faster than jumping kicking through Black's lasers since his life was so low.

Green: With the AI bait, this battle goes off without a hitch. It might look boring, but this really is the fastest way to take Green out.

Golden Silver: I'm not going to deny, this battle was crap. The good thing was I successfully pulled off the positioning trick that forces Golden Silver to sit there until I knock his life down to about 6600. Afterwards, I managed to fail at pulling off the AI bug consistently twice before I get Golden Silver locked into a pattern of constant jumping. When the blue gem came out, I was doing pretty well until I jump kicked right into the laser, causing me to get hit way more than I should. Thankfully the battle was still quick.

Other than the final stage this was a great run, and if you disagree have fun getting better luck in the Dice Palace than I did. =P