Released in October 2005, Gunstar Super Heroes is considered more of a tribute to the original Gunstar Heroes than a true sequel. Many of the villains and stage themes from the first game appear, only slightly revised. Even the game's plot is similar, involving Gunstar Yellow, Green, and the four gems again. As a result, the game received mixed reviews. Some reviewers proclaimed Super Heroes a successful return to action-packed, old-school gameplay; others were of the opinion that the title was merely a rehash of the first game. 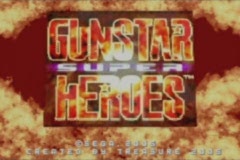 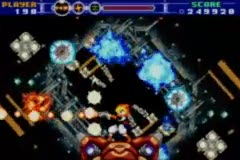 Ah yes, the game that plays more like a remake than a sequel.

After a decent amount of attempts, I came up with a time of 18:51. The time is pretty good. It has few mistakes, and it's far lower than I thought it would be to begin with. Aside from the one-second brain farts that accompany every submission to some degree or another, I would say the worst part of the run were the two Green fights. He used Urchin Force in neither fight, and the second fight just naturally looks slow. I can't think of any way to damage him consistently with something larger than a peashooter when he does some forms, and I just opted to take the stupid way out, get damaged, and use proximity to try to stop him blocking shots. I could dodge, but I'd waste more time dodging than I do getting hit, I believe. I'm playing on easy for a reason, I suppose.

I think that, while this run could be improved, it's good quality stuff overall, and I think you'll enjoy it greatly. A couple of the boss fights are just sick, and most of the levels went really well. Watch and see. :P