Released by Hudson in 1995 as a rental exclusive, Hagane is one of the more overlooked titles on the Super Nintendo. Its protagonist is a cyberentic ninja who runs around performing assorted acrobatics and making things die. Need I say more? 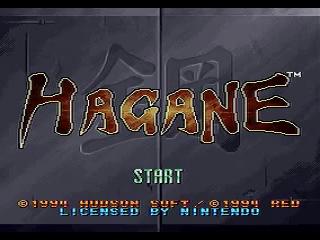 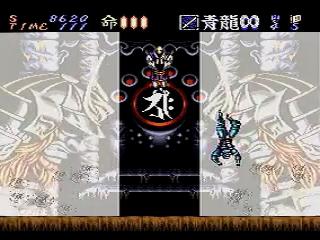 This awesome bit of game combines two great video game staples: ninjas and cyborgs. With a ton of movement options and a plethora of attacks, it's also very versatile. I really enjoyed making this run and it should be plenty flashy for others even if they've never played it. It's also one of the most-sought games in the US Super Nintendo library, which makes it tricky to find. On that note, the Japanese version is somewhat easier to get ahold of, and is identical to the US version in terms of speedrunning.

Some general points about running this game:
-Sliding and air tumbling are the fastest forms of movement available; backflipping is better for stages with uneven ground or where the invincibility frames are needed.
-The vertical kick (aka "upkick") is the strongest move in your arsenal by far. It does 25 damage; the next most powerful attack does 7, and your sword/kunai/bombs do 2 per hit. Thus it absolutely destroys bosses when it can be set up.
-Bombs create an active hitbox over the entire screen that does 2 points of damage 3 times; so it will do 6 damage total most of the time, but not all at once. It still triggers invincibility frames, so that's important to consider as well. Unfortunately they also cause ~30 frames of lag on every use, but most often the benefits outweigh this. The point of using bombs is that they allow you to do damage to enemies/bosses while you otherwise can't attack them. For example, during a tumble or on the way down from an upkick. This is what enables a couple of the quick kills.
-I've completely dissected the RNG; see the Hagane thread for more details. To summarize, I can manipulate it to a point, but anything beyond the first stage is out of my hands. I use this to force a couple of bomb drops, so it removes hunting down additional drops later in the run.

Set up the RNG manipulation fine in 1-1. The first two bombs are manipulated each time, and any subsequent bombs are bonueses. An ideal run uses at least 5 bombs, so I pick up all I need here. 1-2 goes fine and I manage to dodge all the turtles, which is pretty uncommon. The miniboss can be timed tighter, but it's difficult to set up since there aren't any consistent cues that I can use so I err on the side of caution at the cost of only a third of a second or so. 1-3 features my improved version of the worm skip, which involves spawning a turtle and abusing the invincibility period to catch the first worm cycle. There's also a point towards the end where I keep the camera facing right as I climb up; this is to keep the flame breather mostly off the screen and allows me an easier way to jump over him. 1-4 is an autoscroller. Musha-Mukuro is entirely manipulated by position, but it's a pretty narrow window to set up the second kick. The best possible kill finishes him off with the downward kick after the second upkick, but I've only ever pulled it off 3-4 times. Also note that the game briefly forces left+right if you crouch after running into the room. I show this off a little bit, but it goes away after the boss reaches the full height.

2-1 is just a miniboss, so I goof around a bit. I start the tumble a tad early and as a result get hit on the way down, which costs a small bit of time. The miniboss also did not do his best pattern, where he ends up much closer to the ground; this would have saved an additional second or so. 2-2 has a lot of things going on, but it's controlled by the cycles of the platforms and the garbage blocks so there's usually not too much variation here. With a full 5 HP I can take a slightly faster route (saves .5-1 second) but that's a pretty rare opportunity. 2-3 goes nicely as well. En-Mikoshi has 4 patterns that he can use with equal probability; only one of them actually makes him vulnerable. I have to settle for a second-cycle kill which costs 8 seconds, but it's very hard to make luck cooperate all the way through this run. This is the main place time can be saved in future runs.

3-1 feels pretty sloppy, but it barely costs any time. Probably about a second is lost to getting hit and messing up my bouncing. 3-2 goes a lot better, and I nail all the good paths along with the miniboss quick-kill. 3-3 and 3-4 are autoscrollers, but I do have to work in a small amount of lag reduction in 3-4. Jasei-Jyu went fine; she only has one pattern that is slower to deal with, and she didn't do it on her first cycle.

I get stuck barely on the edge of an upward slope in 4-1 which prevents me from sliding and causes me to take a hit, but it otherwise goes fine. Probably about a second lost there. 4-2 is controlled by the elevator, so I'm good so long as I can make it there for the first cycle. Not getting hit anywhere else is also a bonus. 4-3 features a new skip which saves 15 seconds over the previous route. I kill off the soldier to lower lag a little bit, but it's still pretty bad. Jyuso-Dama is very consistent now that I've found a way to hit him every time on the first opening.

This stage is full of minibosses. As far as I know, the smaller enemies are on a timer and are not triggered. The first miniboss goes pretty well, and I take damage so I can attack on the way down and finish him off slightly quicker. The other minibosses fall to easy cues. 5-2 has another fun skip and I hit it first try. The miniboss in 5-3 has only 1 pattern of many where I cannot hit him with the kick, and he cooperates this time. Small amount of time lost from getting hit in 5-4. 5-5 goes fine; there's a short zip that is possible in real time, but failing it is instant death and it is tricky to set up so I opt to not include it. There's also a glitch where you can go right through the rotating platforms, but I don't know how to trigger it. Shura-Oh is another luck-dependent boss; he has a 1/4 chance of spawning his weak spot on either side; there's a very slightly higher chance of it spawning on the right side than the left. Getting the three arm pumps is also the best pattern prior to the kill, so I made up quite a bit of time there. Getting the 1-cycle kill and the arm pump pattern saves upwards of 15 seconds over the TAS. Amano-Ikazuchi is the final trial, and I could afford to be a bit flexible there with an excess of bombs. I usually plan on only having two bombs available, but each bomb allows me to hit the heads when I otherwise can't, such as when I'm climbing. I timed up until the last hit, but player control does not stop until the white explosion first appears in the center of the screen.

Afterwards the game goes into a "2nd loop" where all regular enemies and minibosses have slightly more than double the health. This is quite a bit more difficult in some parts, but also not at all receptive to speedrunning strats.

So this run is by no means perfect, but this run is pretty harsh in terms of luck and sheer number of inputs. With the best luck and cleaning up a few more places, it can be pushed down another 10 seconds. The sum of my best splits is roughly 14 seconds faster than this run; 10 of that would be reasonable to gain back with enough attempts. Unfortunately it's entirely dependent on boss luck; getting the best patterns from En-Mikoshi and Shura-Oh will only happen in 6.25% of runs, and that's without dropping any of the other tricks throughout the run. So I'm very happy with this run. I've brought it a lot lower than I initially expected and found a lot of cool skips and tricks, so I'm satisfied with how it turned out.