Released in November 1998, Half-Life used a heavily modified Quake engine to create a very immersive 3D FPS experience. Gordon Freeman heads to work at the Black Mesa research facility for what should be a normal day, but an experiment goes horribly wrong and a portal to another world opens. 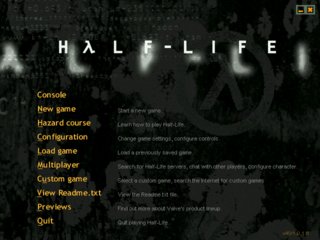 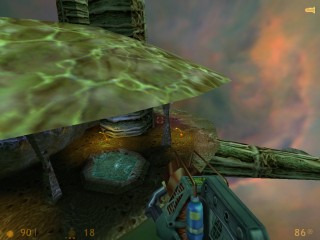 Timing note: A penalty of half a second is added to the time for each demo recorded beyond the first. This is because the engine cuts out around 0.2 seconds on the start of every new demo, and to discourage using a large number of demos.

Runs on the Playstation 2 version:

I'd like to thank quadrazid (a.k.a. QUVUBOOI) for being my main booi. He has given me tons of valuable feedback and comments on all of my attempts. He also captured and encoded the demo, what a cool guy!
Spider-Waffle for his amazing (but now out-dated) segmented speedrun and discoveries in this game.
My team HL24 Boyz (CrashFortress 2 & PineApple) along with the fellas mentioned above.
Everyone else who has either done single-segment speedruns or segmented speedruns of Half-Life; -think.circle-, dopefish, RandomEngy, droogie & rayvex to name a few.

Due to demo recording issues with the WON version of the game I decided to do this run on the current steam version of the game. There's unfortunately a huge disadvantage of using the steam version of the game; the speed cap. If you exceed the speed of 544 ups (units per second) and you attempt to do another jump with that speed you'll lose your speed and go back to 320 ups (normal walking speed). That's why you'll see me do a duckroll in certain places (continuously doing double ducks) to keep my speed rather than hitting the cap since your duckroll speed isn't capped at all. This became a huge pain in a few places but I learned to cope with it fairly well. The advantage of using the steam version is that you get one complete demo when you record and you can have your framerate set to above 100 which is useful for a few tricks. This version also comes with a few sound bugs in the demo recording which are caused by the game getting confused when you record one demo across several maps.

Sup y'all, this is an improvement by almost 3 whole minutes over my previous run and roughly 1:20 faster than my canceled submission. Cool Cool Cool Cool

Hitting the broken bridge duck object boost in Unforseen Consequences
Utilizing much riskier strategies and superior movement throughout the game. I tried to go at it as aggressive as I could and it paid off for he most part.
New innovative tricks.
Using direct weapon binds instead of selecting stuff with slot1-5.

Rocket grunt beat my @$$ with his AR grenade.
Tripmine hell hiccups.
The destructable floor in Gonarch's Lair didn't blow up from 5 satchels and tripmines so I had to put some additional force into it.
The fight against Nihilanth was terrible but didn't end up costing me too much time. Damn me for chokin' it up at the very end!

I'm fairly satisfied with this run despite the major & minor flaws. I don't really see sub 36 happening on this version of the game in a single-segment as of now. I'll get back to improving this run whenever someone gets remotely close to beating it, I'm going to work on Green and Blue for now. Listen to the audio commentary and visit sourceruns.org if you're interested in know more about the game and its tricks!

This run is a Single-Segment, this mean that I played this game from the start to the end without saving or dying, in one sitting

Failed jump and getting stuck at 30:19, costing 4 seconds

I Stayed too much in the health-door bug

Other than those mistakes I'm really satisfied with this run

Remember that the Ps2 version is very different from the PC version, I did a video that show the differences: (http://www.youtube.com/watch?v=B8es3kUS4MU)