Released by Tik Games, LLC on PSN and PC in early 2010, Hamsterball is a fairly basic game made in the tradition of Marble Madness. You control hamster in a ball (hence the title) and must navigate him through a series of mazes featuring obstacles like pipes, loops, and assorted enemies. Basic, but fun. 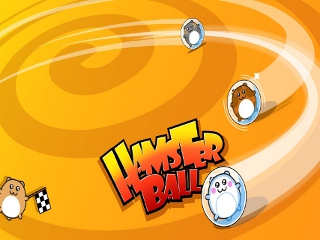 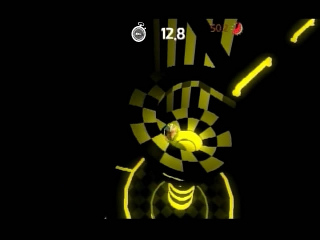 Thousands of hamsters were killed in the making of this speedrun.

Hamsterball seems to be a very ambitiously-programmed game. What I mean is that it seems the game's creators programmed exactly how far the ball can safely fall from each and every location. The distances are not consistent; the hamster can fall farther safely from one place than he can from another.

I play the Playstation 3 version of Hamsterball, downloadable off PSN. I learned there is also an older version of the game for PC, with levels that the PS3 version does not have. (The PS3 version also has a whole other mode that I have not speedrun.)

I have to be careful in my comments not to say I have any "world records", because even though I am first place on the PSN online scoreboards in some stages, I have to assume that over the years some people have done better than me at these stages on the PC version. My goal is not world records or PSN bests though, it's to get the times as low as I personally can.

Since the programmers seem to have worked really hard to stop the player from skipping parts of courses that aren't intended to be skipped, I'd say any opportunity to do so is a glitch. Dizzy is an enjoyable glitch-fest romp, and Cascade is also a bit of one, but thus far we have not turned any of the other levels into total glitch-fests. For my tastes, this is alright with me :) I think it's fun to see how the game is meant to be played, at least some of the time. But of course it's future runners' job to change this! (I believe the Glass shortcut probably was intended, by the way, as with the small shortcuts in Odd and Neon. The Up launch straight to the goal?! I honestly don't know if that was meant to happen :D )

Here are comments on possible improvements:

"Warm-up" 5.3 seconds -
In this run I did not pick up any extra speed at the start, something that happens occasionally in this level that I can't explain. If someone can pull off approximately this route on an attempt where they do receive extra speed, I could easily see them tying or probably beating the online scoreboard record of 5.1 seconds. I think I'd better thank Gorash for this one; I think I did very much like he described in an earlier thread at SDA.

"Cascade" 10.2 seconds -
This is one heck of a fun level, when the spontaneous destruction bug doesn't get me early on. As for the jump (or fall or whatever), the farther the ball goes horizontally during the fall the better chance it won't break, so you want as much speed as you can muster before jumping. Also if you use this exact route, you must change the stick's direction quickly and accurately right when you land. This seems to be getting close to the fastest this route can produce, but there may well be a more opportune place or way to jump. (When I got this it was first on the online scoreboard.)

"Dizzy" 11.5 seconds -
It's funny what you can do with more speed than the game's creators intended. This one's route was completely developed by stopstopp. He watched my 28.4 second video, saw things he could improve on, bought the game, and this video was born within a few days. With this exact route I had to put on the brakes and aim to the right during the last flight to avoid sailing past the goal. As for improvements, I don't know 100% that this isn't a perfect time but it's probably possible to run the early portions faster or maybe find a more opportune set of places to land. Or find an even wilder route :) (This was first on the scoreboard, just barely.)

"Tower" 30.7 seconds -
I was a bit slow getting in the catapult. There are two scenarios where I can get to the three spiked balls a few tenths faster -- if I get into the catapult cleanly at 4.3-4.4, or if I get stopstopp's bounce off the enemy ball straight toward the next chute. But this time the windmill and the part just before it went extremely well. (It's on the strength of that that this is my best attempt.) I had good but not great speed around the final curves, and then I didn't get a good bounce toward the goal at the end. I could realistically get 30.3-30.4, but 30.0 or faster is probably possible with perfection and no new discoveries. (This was first.)

"Up" 24.2 seconds -
As far as I know this video is very close to the fastest possible (and it was #1 on the scoreboard), but if I could leave the last platform that raises the ball more smoothly and reach the last launcher at 21.6, I can see 0.2 seconds being cut off this. (I don't know exactly why the last launcher shoots the ball extra far once in a while. Most or all the times it has happened I was hitting the left stick one way or another up until the moment I was launched.)

"Neon" 31.5 seconds -
I'm quite happy with this one. Thanks to stopstopp for suggesting riding the first slope to reach the first hole a bit faster. This was first on the scoreboard, but it can likely be improved - I went wider than I needed to a couple times, and I have once gotten over all three disappearing bridges on the same cycle - so I'd say an improvement of a big chunk of a second is likely possible, even if no one finds a major time-saver.

"Odd" 39.0 seconds -
I don't know how to improve the first 23 seconds until reaching the platform that lowers the ball, because you'd have to reach it a whole cycle earlier. The rest of the way went decently, but is not perfect (for one thing I should've taken a more direct route among the pipes spewing yellow balls). (This was #1 on the scoreboard.)

"Glass" 19.5 seconds -
Somehow I had pictured this stage's big shortcut as being earlier in the level. I thought somehow I'd want to launch myself to a lower level from one of the early platforms. Turns out the shortcut is much more ... simple. As for improvements, well, the area with the three holes was a bit funky, but honestly this is about as fast as I know how to play this stage. It was first (barely) but I'm sure it wasn't perfect.

I do think SDA's first round of PS3 Hamsterball videos has gone well. Then again I'd sure like to see someone nail Tower on video :D

Huge thanks goes to stopstopp, who as far as I know bought this game for $10 so that he could help me on Dizzy. He saw that my 28.4-second video could be improved, and man he was so right.

I also got help from an unlikely source, and I thank: my sister Amy, who usually doesn't play video games. She was playing the level "Up", and she intuitively held the stick forward while the last launcher was throwing the ball. And to my surprise the ball flew farther than if the stick is not pressed. Then she was playing "Odd", and she fell off the rounded route just before the big enemy ball. I had never thought of falling there, and it's a shortcut. Combined, what I learned from my sister helped me save over eight seconds.

Thanks much to mikwuyma and Breakdown, the verifiers, and others at SDA for moving this run forward (and all the other work they do), and thanks to nate and BallOfSnow for the technical help and for creating Anri-chan. Also, major thanks goes to the people on YouTube who have offered me help and moral support, especially stopstopp and slbekim and Drouge87 and TheSuperSmashBrother. Thank you to Stupid and Vardinator and PotatoSalad11 and Tigger77 and I have no name for help and encouragement in the SDA thread, and much thanks to the people who posted in the older SDA thread for the PC version. Thank you much to the awesome players on PSN whose times on the online scoreboards challenge me to improve. Thanks to Radix and others for making SDA what it is. And a special thank you goes to my cat Wiggles for sitting on top of my TV through much of the recording. But the biggest thank-you for this run goes to stopstopp.