Released in 2004 for the PC, GBA, Xbox, PS2 and GCN (though most of the versions are different) by KnowWonder, EA UK and Griptonite Games, Harry Potter and the Prisoner of Azkaban is a movie cash-in game where you control Harry Potter as you go through some convoluted bullshit that is meant to vaguely mimic the plot of the movie. 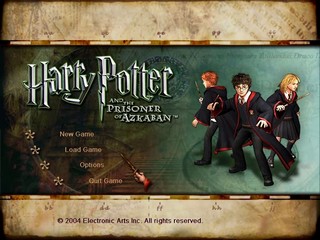 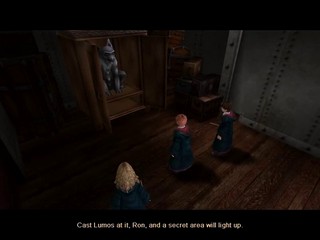 Overall there's nothing to lose this early in the game.
You can get lucky with the Monster Book of Monsters if he keeps all of his pages.
Usually he will lose one page and in the worst case two (which happened to me).

The Carpe Retractum challenge is where things start to get difficult.
You can cancel the spell animation by jumping just after you cast the spell.
We also try to pass by save books because they will stop the game for a second
We are also introduced to imps, our main enemy in the game (it turned out).
Collecting the Pumpkin Pasties is not important because we don't need the wizard cards.
However the Cauldron Cakes (in this guide I'll address them as CC's) and Bertie Bott's Beans are.
In the room with the many platforms, it is possible to just make the last platform, open the drawbridge and CR yourself to it in one go. I also just managed to save the game, unfortunately.
The rooms after the Fire Crabs are also important. First of all you can jump to the next ledge with the pixies without drawing them towards you, though it's better not to (it doesn't save you many seconds). On the platform to the 5th shield it's possible to draw one of the blocks, but I failed to do so. I also couldn't open the door because saving cancels it or something.
The following room is mainly jump-casting, also there's a quick little shortcut here.
After the loading screen you see me collecting some CC's (you can also buy them but it costs alot of time). I do this because it only takes 8 seconds more or so while buying them would cost at least 15 seconds in total. In the next room it is possible to not use the moving platform, but it's too hard to time, so it's best not to.
More shortcuts in the last rooms, namely jumping to the side to avoid having to use CR and only drawing the highest block out in the last room.

After leaving the shop, I stop for a moment because it's possible that you leave Ron behind, which makes him unable to cast spells against Peeves (taunting you further by saying things like 'we both need to cast a spell, Harry!).

The pixies can be very annoying. Sometimes the pixies can get stuck in the well, which in some of my attempts cost me +-30 seconds. Also we fly with Buckbeak, one of the worst parts of the game. I do the four last races immediately afterwards (I think it would save a few seconds doing that at the end of the game, I might try it another time). Not much to say about them. Sorry for the useless jumping on my way to Buckbeak, it's just that I'm so excited *sarcasm*.

Very nice shortcut to be found in the third room. You can jump on one of the pots and jump towards the dirt, it saves about 30 seconds. In the room with the three hanging torches I make my only big mistake in the game losing about 10 seconds.

Now it's time for Hermione to jump on one of the pots so we avoid having to use the dragon for some more. Thanks pots!

Getting all of the cauldron cakes here is a must, it's the only reason why they are so important.

Nothing to say, don't forget the three easy cauldron cakes.

Another shortcut involving Carpe Retractum, you can jump towards the bookcases immediately, without having to land on a flying table first. Also the imps try to block our way again, I get rid of them without many problems.

It's possible to immediately jump on a spongify tile after leaving the slide here, winning some time, but I didn't get it.

Except for some easy CC's, the challenge is pretty straightforward.

In the first part I already miss an easy CC (which you see me look for later in the challenge).

The part with the salamanders was quite easy this time, also Hermione shows off her teleportation skills here.

Basically they are the 'end boss'. Because basically the story would end there, but the game is only three quarters done by then.

Two more bugs show up here, sometimes the animation that comes up when using the flying staircases, prevents you from doing anything for a few seconds, as you can see at (1:17:04).

Also the portrait passwords sometimes don't open. It looks like it's random, maybe someone has any ideas about this? Already getting some easy CC's is good, because then you won't have to hear Fred's bragging about how good of a quality they are, even though we don't have to eat them, but we use them for buying the passwords.

If you're in time, it's easy to be able to immediately make the moving platforms while CR'ing them.

In the big round room, it's possible to stand on top of a CR-chain to go clockwise, instead of following more platforms counter-/anti-clockwise. It only saves a couple of seconds so I don't use it since it's very risky.

In the last room it's possible to jump the large fences. Unfortunately I miss the first possibility.

The Lapifors part is pretty easy, but the next part can be tricky. If you're fast enough you can push the four buttons in time. The Draconifors part is not easy, but it's not really possible to lose many seconds on this. I must say that it's funny how you forget the timer while speedrunning.

Funny secret: it's possible to miss the last shield as well, by just not running into it.

The only thing that really bothered me about the exam, were the imps. Probably the only time ever (and I have played this game a lot) that I had to wait for the last imp. I also had prior knowledge of where the platform back upstairs comes up, it saves some seconds.

This run doesn't end after quitting Harry's exam, because you still have to click the requirements away. But tell me this, if one of the third year requirements was beating the pixies/book, how did the other students manage to graduate?

I never thought that I would be able to get a speedrun world record, since I don't see myself as someone who can do something quickly. But in the end I pretty much smashed it by 12 minutes.

I'm definitely going to try and improve this, but as they're no easy ways to skip parts, it's going to be very difficult.