Released in November 2001 along with the movie, Harry Potter and the Sorcerer's Stone gave fans the opportunity to discover the many secrets of Hogwart's. Collect beans for Fred and George, find cards of famous witches and wizards, and complete spell challenges that further you along the path to facing you-know-who. 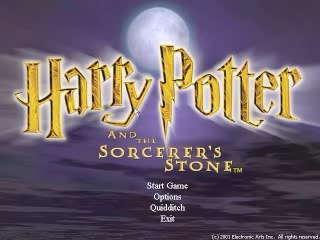 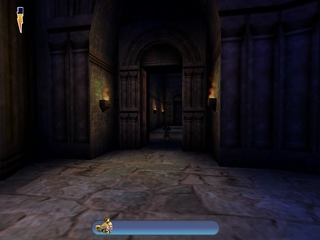 Like always, a huge thanks to the SDA staff and everyone involved in making this possible.

When I played through this game before attempting to speedrun it, I found a bunch of useful tricks and tactics which I've used to make the run stand out even more from a regular playthrough. Here are some terms I will be using in the in depth comments further down.

Highjumping - If you jump while going up a sloped surface, Harry will jump higher than if you were standing on flat ground. This was useful in some areas, and is involed in many smaller timesavers throughout the run.

Superjumping - There is a cheat code in the game called harrysuperjump, which sends you flying at insane speed. There is a way to activate this without typing in the code; if you run over a small edge that causes Harry to "clip", you can jump at that very edge and you'll have a superjump without cheating. This is very hard since the window for jumping is very small. Nevertheless, it is used for some of the biggest skips in the latter half of the run.

Potjumping - If you jump ontop of one of those yellow pots that give you beans, and cast flipendo to knock them over while you're standing there, you will get boosted into the air as the height of the pot's hitbox is doubled when the pot is knocked over, for some reason. You can then jump from there. This is only used in two places in the first third of the run, but they save quite a bit of time on both occasions.

Moving during cutscenes - Sometimes, during certain cutscenes, you can actually move while the cutscene is playing. I found out that you can trigger this during any cutscene if Harry gets hit while it's playing. This was useful in quite a few places.

Not much to say about the tutorial section, I'm jumpgrabbing the bookcases and jumping up the small ledges to save seconds. After meeting Malfoy, I jump over the railing to the left to avoid triggering a small cutscene with Hermione.

I use a potjump to skip a pretty big part of the flipendo challenge here. I also skip pushing a block by doing a curved jump across a void.

Flying was pretty hard, since you don't really want to let go of the "speed-up button" at any time. There are a few occassions where you pretty much have to, though. I finished with about 75% of the time left, which is really good.

In the wingardium leviosa challenge, I used another potjump to get over the railing at the start, skipping a big part of the challenge. Then I used a trick (found by sarouyucgan) to push the stone block through the bars. It only seems to work on the left side though. I used a somewhat precise jump to avoid waiting for the last floating block (also found by sarouyucgan).

I managed to find a really effective way to beat Peeves, it doesn't always work though. You can also see me moving after taking damage during a cutscene. I retried the Malfoy battle until I got him to stay in one position, allowing me to beat him very quickly as well.

By doing some tricky jumps and boosting off a fire slug I managed to skip opening two gates in the garden section.

Beating Malfoy was pretty easy to do quickly... I'm pretty sure I knock him off at the earliest possible time.

Forest Edge was one of the hardest segments in the run. I have to dispose of the first pixie or he would knock me down while climbing the wooden platform later on. The hard part was actually to get past the tentaculas and fire slugs near the very end without getting hit.

The caves were generally easy to get through. You only have to collect 3 fire seeds for Hagrid, so I skip the rest.

Quidditch was ridiculously easy, you just have to stay close to the snitch and wait for the meter to fill up.

I use two superjumps to skip large parts of the lumos challenge, saving minutes. You don't have to fight Peeves here unless you want the challenge star.

In Snape's classroom, a high jump allows me to go over the cauldron instead over running around the room.

In the potions challenge I was able to skip one ingredient and still finish, as the game doesn't seem to check for any of the parts. I still have to collect the other 3 since they are triggers for doors to open. I found two places where using superjumps saved time. The first skips a lumos statue and is pretty hard, that's why I save just before it. The second is in the last hallway before the bridge and only cuts off a few seconds of running, but it looks cool nevertheless.

Not much to say about the troll part, I try to keep running in as straight a line as possible, jumping across the gaps in some unintended ways. The actual fight against the troll is a joke, all you need to do is stand still and spam flipendo, as I show here. Makes you wonder if the troll got knocked out by the club, or the flipendo barrage Harry sent at it.

Not too many tricks used in the first half of this segment, quidditch was a bit harder this time, but still quite easy, and the way up to the tower was just a matter of optimizing the gameplay. When going down from the tower, there are quite a few tricks involved, however.

I used a highjump to get ontop of the side of the bridge at the start, allowing me to bypass Filch and skip a cutscene a bit ahead, since Filch despawns before he can trigger it.

In the next area I was able to lure Filch away from the doorway and run past him, without having to climb the bookcases. I used the same tactic to avoid waiting for him in the very next area.

For some reason (probably because the game doesn't like you rushing through things), Filch and Mrs. Norris' behaviour gets weirder and weirder. For example, she'd always fail to jump ontop of the bookcases in the section with Nick. This saved a lot of time since I didn't have to watch out for her.

Finding the fastest way to put Fluffy to sleep wasn't exactly hard, all three heads recover at about the same rate, and the middle one takes significantly longer to put down, so I get that one down as much as I can before it attacks, then I put the left head to sleep, then finish the middle one, and then quickly get the right one down.

It was quite hard to get a reliable strategy down for the devil's snare, ideally you want to hit the tentacles attacking you as few times as possible. I think I have a pretty good way of accomplishing that.

The winged key section was just another quidditch match, the key always follows the same path.

For the chess game I tried every possible option, and it seems to be impossible to end the game in less than four moves. I get four pieces to destroy themselves during the second move, so that saves some time by only having to watch two pieces move during the third.

I actually miss a flipendo cast at the potions, but the way they moved more than made up for it. The chances for them to stop in a position so that I don't have to run around the table five times in a row is extremely low.

By jumping over the gap to the left after the potions, I skip triggering a small cutscene showing Quirrell entering the next area.

I'm pretty sure the block pushing part is optimal. Quirrell doesn't get to push the blocks back a single time.

That's it, hope you enjoyed watching my run.