Heavy Barrel is a 1987 top-down Run and Gun Shooter by Data East that only marginally fits that classification as the main character significantly outpaces the screen scrolling speed. 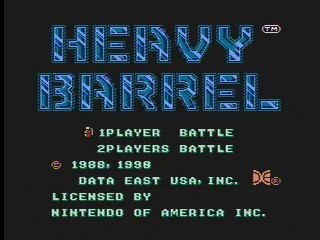 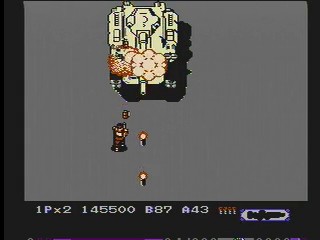 So this is a really unusual run that I did in a couple days when I was bored. Because of the fact that your character walks about twice as fast as the screen is capable of scrolling, the game looks like it consists entirely of auto-scrollers in a speedrun, but only the elevators are truly auto-scrolling. So most of the game is spent waiting for the screen to scroll, and the rest is getting fast boss kills. This is really easy since the red grenades and flamethrower do way, way too much damage. Based on what I know about this game, I doubt more than 5 seconds could be cut off of this run, some of which from slightly more optimal boss kills, a tiny bit from the once or twice where I allow the screen to stop scrolling for a breif moment, and the rest from getting better lag reduction.